How famous are you?

This easy and completely non-scientific test may surprise you.

Type your first name into Google -- if you're super-famous, or have an unusual first name (the bias of this test!), you will appear in the list of suggested names. Alvina is the only person I know personally who does. 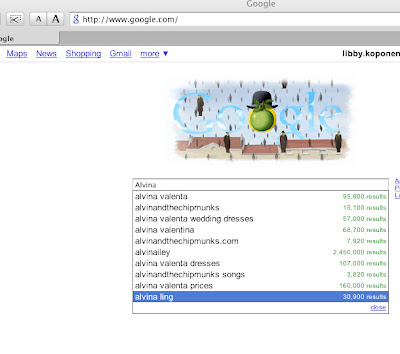 The most famous author I could think of appears after you type her first initial followed by a period.

But here's where it starts to get fun and (to me, anyway) encouraging and interesting, too: type a space and the first letter of your last name (or maybe the first two letters) and if you have had a few books published, and a Web site, you will probably appear somewhere near the top of that list! Exception: if a celebrity with lots of Web sites and blogs has the same first name and initial. I can't even bring myself to write the name of the celebrity who hogged a slot that should properly belong to one of the BRGs.

But my other author friends all appeared.....and (this really surprised me!) we were only two places lower ("less relevant," as Google has it) on our lists than really famous authors like Jerry Spinelli and Linda Sue Park were on theirs! Did your name show up on this ______(first name) and __(last initial) list? I only tried ten authors, maybe it's just coincidence that they all -- famous, a little famous, and (like me) not at all famous - ended up in about the same spot on the list. All about equally relevant, according to Google.
Posted by Libby Koponen at 1:13 AM

Email ThisBlogThis!Share to TwitterShare to FacebookShare to Pinterest
Labels: self-test, test, test yourself

I'm probably doing this all wrong but as I type a "c" on google, all the "c" sites I have been to over the year come up. So my name, along with a crap dip recipe and a friends (name starts with a c) site etc pop up.