We're all in this together

I voted at an elementary school, and that's what the sign someone had painted on the wall said: we're all in this together. 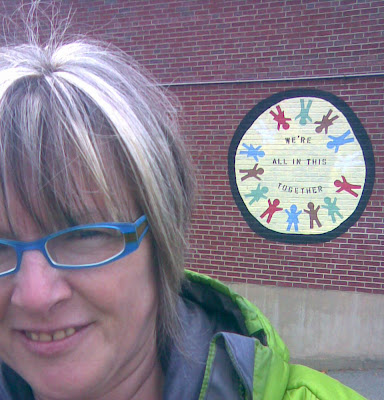 My father grew up in Harlem, and I found myself thinking of him as I walked to the polls, and how happy he would have been. I thought about Little Rock -- I was only six, but I remember the news on the radio that morning, telling about the crowds full of hate outside the schools -- and my parents talking. I remember, later, when I was grown-up, reading about the little girl who had been so excited to start school that day, until SHE heard those radio reports. But she wasn't scared, even when she got to the school and saw the hostile crowds and heard what they were shouting at her, because she thought the police (or National Guard?) would protect her. Then, when she started to go in, they raised their rifles to stop her. She walked slowly home, and stopped in a park on the way -- and a white man put his hand on her shoulder and said,
"Don't let them see you cry."

I remembered my best friend telling me about watching Ku Klux Klanners marching. She was, I think, around nine and hadn't met many white people then, because she lived in the south and went to a segregated school. She looked at the faces full of hate, kids' faces, too, not just grown-ups, and realizing at that moment that there were people who would hate her without ever knowing her, just because of the color of her skin.

And I thought of someone on the radio yesterday saying something like, "Rosa Park sat so Martin Luther King could walk. Martin walked so Obama could run. And Obama ran so we could fly."

I know this election is about more than race -- and I'd be voting for Obama no matter what his race was -- but that's the kind of thing I thought about on my way to the polls. 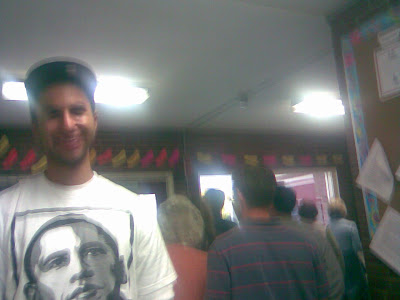 PS Here in CT, the wait was about 30 minutes and the only ID I had to show was a letter with my address on it.
Posted by Blue Rose Girls at 2:50 PM

Beautiful! I DO think that an Obama win will do a world of good in helping to lessen racism in this country.

I was happy to read your name on the list of children's authors and illustrators supporting Obama!

I never thought that I would live to see the day that an African American would be the presidential candidate of a major political party in the US. Maybe there still is hope for change in our country and a turning against racism and bigotry.