the making of a nonfiction picture book

Fuse #8 and her husband recommended a great book for me to read. It's called Understanding Comics by Scott McCloud. This book gives you a lot to chew on. I'm going to talk about it tomorrow... and also how comics influence what I do.

Today, however, I want to talk about nonfiction. First, let me share with you the cover of my latest nonfiction book, which will be published next year. 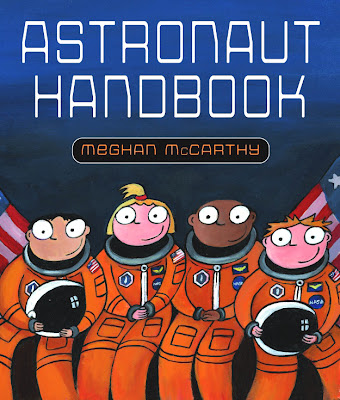 Now I want to share with you all a story. A week or two ago I did a little talk to a group of illustrators and writers. Of course I talked about my nonfiction work and let everyone look at all of my books in print. Afterward a man came up to me holding Strong Man.

He said something like "I didn't want to mention this to the group…but…this isn't published yet, is it?"

I said that it was. I then braced myself for what was coming.

"Well, I hope your publisher knows what it's doing."

I shook my head.

He then explained that he worked in the fitness industry and knows the guys who knew Atlas, or something to that effect. He then went on to say that yes, Atlas is a good guy, but that his image was all about marketing and that my book is basically Atlas's marking campaign summed up in picture book form. He said that Atlas DID use weights even though he claimed not to... that he came up with Dynamic Tension because the other guys already successfully marketed weight lifting routines...and some other stuff.

1) My book is about inspiration, about overcoming odds, about determination... and so on. It is NOT supposed to be an exposé on man who died 40 years ago. I was not out to get the insider scoop... the dirt on the man... or anything else. How would that make a book for children better? Why would children care?

2) A nonfiction author CANNOT base a book on gossip, he-said-she-said, or anything else that isn't DOCUMMENTED. My rule of thumb is 3 sources. If I can't find the same fact in at least three sources then I won't generally use it... UNLESS it absolutely came from a credible source such as first hand information such as an autobiography.

3) A nonfiction author must be VERY careful. Doing a book on a person whose relatives are still alive is tricky. If Atlas for his entire life publicly insisted that he didn't use weights, for example, then that's what I have to say. Unless there's a photo of the man lifting weights then I can't say that he did. Furthermore, who cares if he did? That's not the point of my book. God forbid I got something wrong and Atlas's son came out of the woodwork to reprimand me.

Nonfiction is not like writing fiction. It takes SO much more work, time, sweat, and tears. I'm good at writing PBs. I can write a fiction one pretty quickly. But not nonfiction. To come up with a few sentences I might have had to read 3 books to do so. Publishers do fact check but not as thoroughly as one might think. It’s the author's responsibility to make sure the facts are correct. There are a lot of know-it-all's out there. They will jump at the chance to make you aware of something done wrong. So, as an author, you have to make sure that doesn't happen. If someone says something is wrong, I am always ready with my file of research on the subject. I can defend myself and back up my facts. That's IMPORTANT.

Here is the LARGEST problem with nonfiction, especially historical projects: Nonfiction IS in many ways fiction. Of course it's based on facts, but facts are compiled and recorded by PEOPLE and people make mistakes…and each person will perceive the same thing differently. Ask 10 people to watch a show or event and then have them describe it. Guaranteed you'll get 10 different responses. What a good nonfiction author will do is take those 10 responses and find the most balanced, middle ground and base his or her book on that. Of course every nonfiction author is also a person with a perspective/opinion. If an author doesn't have one then a guarantee his or her book won't be that exciting. Therefore there WILL be another perspective added to the mix. I will readily admit that I have a strong opinion on the subject matter for every book I do. My opinion/take on the subject may not be readily apparent ...but it's there... hidden... waiting for someone to unbury it.

So that's my take on nonfiction. Questions? Comments? Bring 'em on!

School textbooks change over the years because the way we perceive and understand history changes, and so do the things we call "fact."

Besides, a good teacher or parent will take a kid's interest in a book like yours and expand on it by exposing them to other books with similar subjects- so that in the end they can make up their own minds about what is fact and what is fiction.

LOVE the colors and the cover of the book! I would pick that up right away from a bookshop shelf. Can't wait to see the insides!

Thanks for your insight into this murky world of non-fiction.

Being a teacher, I hesitate to use a book that has misinformation, even a small one. Kids take in information like a sponge, and if it's not accurate, the child goes home and spreads the misinformation. I've had kids ask me about Van Gogh and his ear often. I couldn't answer them until I'd read about it thoroughly. I spent the summer reading 3 books on Vincent, and then felt qualified to talk about the 'ear' incident. And that was for a class of second graders where I had to edit up the wazoo! Parents/adults, as you found out, are much more savvy.

If one person questions the book and it's information, there are sure to be others. Others who are potential buyers....

I just completed a huge non-fiction project and struggled with many of the things Meghan mentioned: incomplete historical records, unreliable reporting, etc. My bottom line when self-editing: consider the appropriateness of the info for the audience, and be sure to have several independent sources for facts. (And don't assume that just because something is published everywhere, it's true! Sadly not so!) I don't think a picture book can possibly be a comprehensive biography because people are more complex than 32 pages and (up to) two thousand words. Rather, a picture book might be better considered a starting point or introduction to pique people's interest in a person or to engage reluctant readers. Think of all the existing children's book bios that omit relevant and compelling info...start with books on the presidents. Do biographies of Lincoln focus on his depression? His wife's spending and mental illness? What about the big-time philanderers? I've always thought that being a good storyteller means knowing what to leave out. The author has to consider the big picture and I would hope disgruntled and/or critical adult readers would consider the big picture, too.
- Hope
PS: Kathleen Krull does fantastic bios for older readers that include some less "savory" tidbits about her subjects. A good choice because the audience will have a little more perspective and the "naughty" bits will hook kids and keep them reading.

I totally agree! Knowing what to leave out is a big part of the author's job. The point of my books IS for them to be a starting point... for all sorts of other historical topics. It's really hard at first to start taking out what may seem like some important stuff, but the book ends up being better for it in the end.

I’d like to respectfully but completely disagree. If your sources are incorrect, then your information is incorrect.

Well, that's why I use the 3 source rule. IF the New York Times and the official website and a book and The Washington Post and every other source says something and I repeat it in my book then how am I wrong?

If a tree falls in the forest but no one hears it did it really fall? If your grandma said the man was wearing purple shoes but every newspaper said green am I supposed to go with your grandma or the 5 newspapers?

I think that the grandma-and-the-shoes question doesn’t provide a useful parallel; it misses the image construction central to the Atlas story. Now, if the man with the shoes was a long-time purple shoe aficionado who was trying to build a green shoe footwear empire... and using ad copy to construct a whole new green shoe persona to fit his cause... and grandma was an insider in the footwear industry who had seen some things.... Well, look, let’s leave shoes to the side.

To address your first question, just because you have three sources, can you still be wrong? Yes, yes, and yes. Look, anyone can be wrong. To argue that you CAN’T be wrong flies in the face of common sense. All sources are not created equal, for starters. The Atlas web site is the internet version of an informercial, for instance. And even better sources may have their errors. A very little time with Google led to one Charles Atlas bio that early on includes the sensible line, “Shrouded in advertising lore, the biography of Charles Atlas must be viewed with a certain amount of skepticism.” Your argument, put briefly, seems to hew closer to the ideas of the newspaperman in The Man Who Shot Liberty Valance: “When the legend becomes fact, print the legend.”

See, all I wanted to do was share some interesting info... to shed some light onto the struggles of writing nonfiction and now I'm getting people who are presuming that my book has incorrect information in it. If it's wrong then prove it. I dare you. There’s more to this that I can’t talk about so it was stupid of me to bring up the topic to begin with.

I don't know why I care anyway. The book has gotten 3 starred reviews and just got a great review in the Wall Street Journal. At least some people know what the point of the book is!