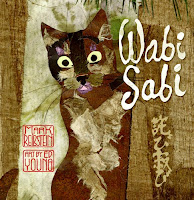 Last week I started the story of how Wabi Sabi came to be here, and this week I'll pick up where I left off, which was after Ed Young sent the project to Andrea Spooner.
So, you're probably wondering how it went from Andrea to me. Andrea was intrigued by the project and brought it to our editorial meeting. She said she knew it needed work, but wanted to know if others agreed that there was something there. I was immediately drawn to the concept of wabi sabi and volunteered to read it. I absolutely loved the idea of the story, and along with the other readers, agreed that there was definitely something there, but that it would have to be revised before brought forward to our acquisitions meeting. Some time went by, I think a month or so, and Andrea brought the project back--only it hadn't yet been revised. At the time, Andrea was taking on many more managerial duties (due to our publisher being on maternity leave) and hadn't yet found the time to work with the author on a revision. She felt bad for holding the process up and asked if any of us would be interested in taking the project on and working with the author to get the text to where it would be ready to bring to the next step.
Without hesitation, I THREW myself at the opportunity. From the first moment I heard about the project, I had loved it, and I also jumped at the chance to work with Caldecott Medal winner Ed Young.
So Andrea passed the project on to me and made the introduction with the author, Mark, and Ed. Ed later told me that as soon as he heard my name, he realized that it was familiar because Roni had at one point recommended that he send the project to me--so, he said, perhaps it was meant to be. I like to think so! Although part of me thinks that if Megan hadn't had a second child, I would not have been the editor of this book.
I worked with Mark on revising the text--tightening it, making it more accessible and child-friendly, working on creating more of a pattern with his use of haiku in the text. And when I thought it was good enough to bring to our acquisitions meeting, I brought it back to editorial meeting, and everyone agreed that it was ready.
I was a little worried about how it would be received at acquisitions meeting, but I knew having Ed Young attached gave it an immediate advantage. I just needed to frame the project in a way the committee could understand in terms of today's market, and so I compared it to Zen Shorts, by Jon Muth, which is one of my all-time favorite books. The two are actually very different in tone and storytelling, but both explain a different Asian philosophy in a child-friendly way.
Wabi Sabi is about a cat who goes on a quest to discover the meaning of her name. She asks many different creatures, and they answer in a similar way, by saying, "That's hard to explain." But, as it was with Mark in Japan, they all offer the cat a little tidbit, a poem, a thought. Snowball the cat tells her that "it's a kind of beauty," and goes on to tell her this haiku:

Rascal the dog tells her this:

Poor Wabi Sabi!
As simple as a brown leaf.
So ordinary!

And so on. What I love about this book is that gradually, as a reader, you start to understand what wabi sabi is alongside the little cat. For me, it was the moment Wabi Sabi holds a bowl of tea:

A warm heavy bowl
comfortable as an old friend--
not fine, smooth china.

For others, this understanding might come earlier, or later, but I have no doubt that every reader, young and old, will gain some understanding of what wabi sabi is after reading the book. I think it is probably impossible to fully understand wabi sabi without years of studying, but the author's hope was to start a dialogue about it, to stir up some thoughts about what it means.
I also think the concept of wabi sabi is very much alligned with a child's aesthetic; children's very much appreciate beauty in the imperfect, in nature. One example I gave at the acquisitions meeting was going to the zoo with a friend's daughter who was about 2 years old. We were by the polar bear's tank, and this majestic bear swam back and forth, pushing off with his giant paw against the glass (it was actually a little sad, because the bear was "pacing" which I hear is what they do when they're depressed?), but all the little girl cared about was picking up rocks and leaves from the edge of the walkway.
The project was enthusiastically accepted at our acquisitions meeting, and so we moved forward with refining the text even more, and working out the format and the production details. But little did I know that my wabi sabi adventures were only beginning, and the events that were to follow were to give me an even stronger understanding of just what wabi sabi truly means.
To be continued yet again!
P.S. Libby asked in the comment section of last week's post what I think would have happened if Mark hadn't known Roni. I think that if he had been dedicated to getting published, he would have--it was a unique concept that I'm sure would have really struck someone along the way. But would it have ended up with Ed Young illustrating? I can't guess.
P.P.S. And Christine, you're right about Peter Brown, here's the story of that acquisition! (although I have to add that Peter and Tracy are no longer dating, but both are very happy.)
Edited to add: Jump to Part 3!
Posted by alvinaling at 7:01 PM

On the subject of Wabi Sabi...Ellis Paul wrote a song on his Dragonfly Races album
http://www.ellispaul.com/index.php?page=songs&display=2033&category=Ellis_Paul-_The_Dragonfly_Races

It seems Wabi Sabi is everywhere :)

I love the lyrics too and they fit so well with your post. The weather is pretty wabi sabi right now too. Have a wabi sabi day ;)

What a great "Part 2" Alvina. I always love hearing all that happens behind the scenes (behind for me, not for you obviously)
How books come into being and I, of course, like hearing the tales of illustrators that sway the final vote of to publish or not when it may have gone either way.
While you were discribing the animals explanations of wabi sabi, I was suddenly struck by the thought, could a parents face be wabi sabi? As an adult, I would look on my mothers face, full of many imperfections, features that may never have been classified as classic, skin wrinkled and worn... and yet it was so beautiful to me.
You know no other person would see that same beauty other then yourself.
I love the whole idea of this book, I believe your right, I am sure it would have eventually found a publisher, if the author had wanted to persue it, but obviously not such a GOOD home:)

Yes, absolutely I think a face can be wabi sabi! In fact, my coworkers and I started talknig about which celebrities were wabi sabi. I think my favorite example was Steve Buscemi.

These thoughts on WS quoted from Wikipedia...

>Andrew Juniper claims, "if an object or expression can bring about, within us, a sense of serene melancholy and a spiritual longing, then that object could be said to be wabi-sabi." Richard R. Powell summarizes by saying "It (wabi-sabi) nurtures all that is authentic by acknowledging three simple realities: nothing lasts, nothing is finished, and nothing is perfect."<

Now I really have to buy this book, darn it!:)