The publication story of WABI SABI, Part One 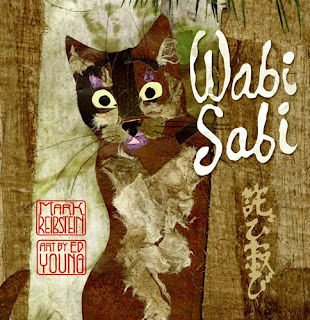 As promised, I'm finally writing about Wabi Sabi by Mark Reibstein, illustrated by Ed Young. Some of know may know some of this story--this book has had a long, crazy path to publication that I felt it was worth sharing. I may be remembering some details wrong, but this is the beginning of the story to the best that I know it.
I'll start with the man behind it all, the author, Mark Reibstein. He grew up in the same town as Roni Schotter (children's book author of Hannukkah! and Passover!), and his family was extremely close to hers, and he was thus exposed to the children's book publishing world.
Mark spent some time living in Japan, and while there he was introduced to the concept of wabi sabi. He asked many people about it, and they all paused and said, "That's hard to explain." but they would offer a poem, or a photograph, a small description, and gradually, Mark began to piece together the meaning of wabi sabi.
So, what is wabi sabi? Well, as I understand it, it is a Japanese philosophical belief in finding beauty in the imperfect, the unexpected, in simplicity and modesty. For example, a old, cracked clay tea cup is wabi sabi, but a fine china cup is not. Fallen leaves in muddy water is wabi sabi. A scruffy, multi-colored cat can be wabi sabi. Mark actually named his cat in Japan Wabi Sabi!
And so, Mark was taken by the idea of wabi sabi and started thinking about writing a children's book about this. Many years passed, and when he finally wrote the text, he showed it to Roni; she loved it and volunteered to introduce him to another local children's book author/illustrator who she thought might be interested in illustrating the project--Ed Young. At the time, Mark really wanted a Japanese illustrator for the project, and also, with life in the way (his teaching, his family), ended up putting the project aside for a bit.
A few years later, Mark was at a local book festival and looked closely at Ed Young's books and realized that he was actually the perfect illustrator for the book after all. He asked Roni to make the introduction, and thus began Ed's involvement in the project. Ed was immediately intrigued and told Mark he would like to illustrate it. He told Mark not to worry, that he would find a publisher.
He showed it to various publishers with no success--at the time, the text was very rough, too long, a bit convoluted. Nobody was seeing the vision for it. And then one day, Ed was talking to fellow author/illustrator Molly Bang, and she said, "Send it to Andrea Spooner. She likes challenging picture books!"
And so he did...
To be continued!
Edited to add: Jump to Part 2!
Posted by alvinaling at 10:54 PM

I love hearing the background on books. Looking forward to Part 2!

This does sound like a great pb story. What do you think would have happened to it if Mark hadn't known Roni?

(I would love to hear others' guesses on this, too!)

I love this story on story and am (sort of patiently) waiting for part 2. Libby, it's always interesting when you hear tales of book submissions that work against the "rules" of publishing (or what we are told are the rules and generally are for most of us)
I would love to hear more of them, I have a few...
Another story of "Illustrator gets publisher for writer" happened here in Canada, when a very new writer found an animator, working at Nelvana, willing to illustrate his book. The animator then walked the dummy in to KidsCan press (owned by Nelvana) It was accepted and went on to win recognition and awards.
Another publishing story I always love is Alvina's meeting Peter Brown (at a party I think it was? Alvina?) and loving his art so much, wondered if he would like to try writing. Another Illustrator, Jeremy Tankard had his Editor suggest he try his hand at writing something of his own, to go with his hilariously simple, fun art style, thus "Grumpy Bird" (and the rest of GB adventures) and "Me Hungry" was born. As Jeremy tells the story, he hadn't written anything since he was 8:) Often it does seem like it is who you know, who knows you, luck and chance circumstance... then again, it's like being the child of someone famous. It may open a door, but without the talent to back the opportunity up, that door can be slammed pretty darn fast on your way out:)

The story behind the book is just as fascinating as the work itself, it always amazes me how convoluted the journey to publication can be. I lived in Japan for 21 years and came across wabisabi often, though it was something curious foreigners would discuss more than Japanese, it's easier to show examples than it is to explain it.
Cover art looks perfect!

This book is so, so perfect, and I adore the concept of wabi sabi. At least, in the beautiful way you've just described it! It seems intuitive, suddenly, and like it should always have had this name.