Beyond the book: GEEKTASTIC edited by Holly Black and Cecil Castellucci

Beyond the Book: GEEKTASTIC: Stories from the Nerd Herd edited by Holly Black and Cecil Castellucci 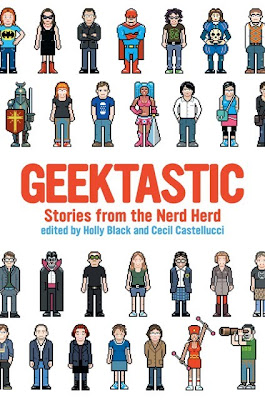 Oh boy, there's so much beyond-the-book geeky goodness to share. First of all, here's the skinny on the book itself:

With illustrated interstitials from comic book artists Hope Larson and Bryan Lee O'Malley, Geektastic covers all things geeky, from Klingons and Jedi Knights to fan fiction, theater geeks, and cosplayers. Whether you're a former, current, or future geek, or if you just want to get in touch with your inner geek, Geektastic will help you get your geek on!

This is the book that I've acquired based on the least amount of material. I've acquired books based on partial manuscripts, but I have never acquired a book based on basically one paragraph:

Description: From Dungeon Masters to cosplaying Klingons, Science Fair winners to the Drama club stage crew and band geeks to comic book collectors searching for that pristine back issue, GEEKTASTIC explores the subculture of geekery, letting those who are often the supporting cast become the stars. The inner sanctum of geekdom will be penetrated and demystified. In this book all will be revealed, from the convention hook-ups and fanfiction rivalries to the civil wars between lovers of original Star Trek and those on the side of the next generation, and the unfortunate incidents when the bacchanalia of the chess club goes just a little too far. Hang on to your laptop and chug some Jolt cola, because once and for all, you'll see that there's very little difference between the most popular and the least.

GEEKTASTIC promises to make you cringe with recognition and embrace your inner geek.

But what the pitch also came with was the incredible team of Holly Black and Cecil Castellucci, and five fantastic contributors already attached: John Green, MT Anderson, Libba Bray, Scott Westerfeld, and Kelly Link. And what it came with was a fantastic idea that, to borrow the words of Holly and Cecil, sang to my geek heart, and sang to the geek hearts of my colleagues.

The project went to auction, and in my offer letter, I included some of the geek qualifications of my colleages (names deleted to protect the...er, geeks):

“I saw Star Wars seven times when it first came out and even saw it twice on the same day. I also made a Star Wars scrapbook and had a huge crush on Mark Hamill (what a geek! Everyone knows Harrison Ford was the cute/smart/cool one.)” –former neck-gear-wearing geek

“In high school I truly believed you had to do paperwork to join the apathy club.” –recovering Zappa addict geek

“I used to have crushes on anime characters, like Spike from Cowboy Bebop. I would download the Japanese theme songs from these anime series and pine for my unrequited, animated love.”–cartoon fetishist geek

"Sometimes I look at my friends and wonder what our superpowers would be if we were a crime-fighting squad." –resident fantasy/sci-fi loving geek

“I was a band geek - part of the colorguard to be exact. We'd march around the band at football games waving our flags in our skirts & boots thinking we were cooler than the cheerleaders - oh, definitely not...” –former wannabe cheerleader geek

"One Halloween I dressed up as the Ebola virus--I even included symptoms written in blood-like red pen on my back. The other kids thought I was dressed as puke." –former infectious diseases geek turned adult hypochondriac

"I recently went to a competitive cat show and took a class on puppet making." –former Moon Boot-wearing geek

“I feel like my geek qualifications are far too numerous to list, whether it was collecting comic books as a kid (and buying two copies--one to put away and never touch--and one to read) or collecting action figures in my 20s... Or it could be getting braces for the first time when I was 30 (alas, no headgear)! But perhaps my geekiest moment is the level of excitement I feel over the possibility of having this book to work on--lot's of very geeky marketing ideas come to mind that would help readers from coast to coast celebrate their inner geek!” –all-around geek

As for me? Well, I included my geek qualifications, too--in resume form, no less (click to enlarge): 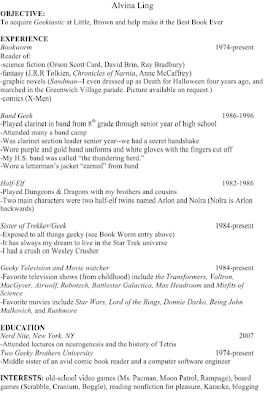 According to the agent, the incredible Barry Goldblatt, every other interested party also included their geek qualifications, but I'm proud to say that I was the only editor to include hers in resume form.

We got the book, and team Holly and Cecil were on board. I've never worked on a short story collection before, so this was a bit of a challenge. We came up with our dream list of contributors, and asked for rough topics from our existing contributors, and then chose contributors to fill in the blanks. We wanted to cover all kinds of geeks: book geeks, sci fi geeks, band geeks, comic book geeks, theater geeks, science geeks, and more. The final book as everything from a baton twirling geek (story by Lisa Yee), astronomy geeks (Wendy Mass), LARPers (Garth Nix), Quiz Bowl geeks (David Levithan), Buffy the Vampire Slayer geeks (Cynthia and Greg Leitich Smith), Rocky Horror Picture Show fanatics (Libba Bray), and it's kicked off by a story by Holly and Cecil, about a Klingon and a Jedi hooking up at a ComicCon. Geek categories that didn't get a full story were covered in the comic interstitials between each story, illustrated by Hope Larson and Bryan Lee O'Malley, including this one: 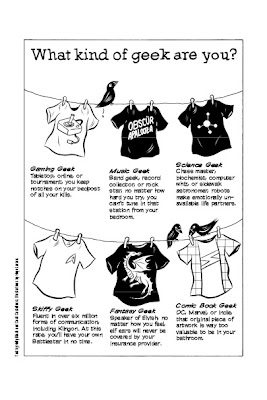 There's truly something here for everyone. I've really loved how a story that one reviewer may not have cared for was the favorite of another reviewer. Sure, some of the stories speak mainly to hard-core geeks, and non-geeks might not get all the references. But that's kind of the point. This is a book for geeks, by geeks; but it's also a book for past geeks and future geeks.

Other challenges:
-contracts details were a headache--we had to negotiate with many different agents and coordinate payment for 19 different contributors.
-How would the editing process work? We decided that Holly and Cecil would edit the short stories until they were happy with them, and then pass them along to me.
-How to determine the order? At one ALA, Holly, Cecil, and I sat outside in a courtyard and each made our own order--it was like making a mix tape. Then we compared lists and worked out the order together.
-Keeping track of all the stories and all the deadlines was a juggling act for me and my assistant Connie. And yes, I may have once sent queries for the wrong story to the wrong contributor... whoops!
-The subtitle: we went through so many different possibilities, from "Stories of geeks by geeks," "Stories of geeks and the geeks observed," "Stories for your inner geek," "Stories of the Awesomely Uncool," "Stories from the Nerdishly Obsessed," and so on. In the end, it was assistant editor T.S. Ferguson who came up with the final subtitle, "Stories from the Nerd Herd." And yes, we debated the difference between geeks and nerds, but in the end, we felt that this was a book for geeks and nerds alike to relish in. This is a picture we took of Holly right after we settled on the subtitle: 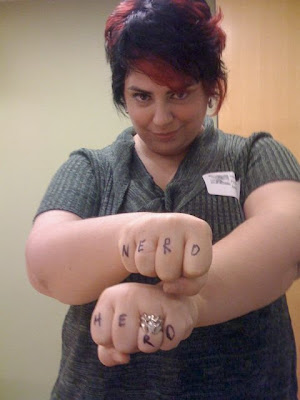 Working on the package for this book was so much fun. The designer Ben Mautner had the genius idea of approaching Design collective eBoy for the cover avatars. Our brilliant marketing team came up with the idea of having eBoy make avatars of each contributor, which we also used throughout with each author's bios. (Read more about the cover design in the PW Cover of the Week article here.) We even made a wink at the whole "All Your Base are Belong to Us" thing on the back jacket flap ("All Your Stories are Belong to Us."). Viva the nerd herd!

The book has been greating great reviews, including from trade reviewers:
“Throughout, this all-inclusive love fest plays homage to the classics of D&D and Star Trek, but there’s plenty of room for fans of new faves such as the re-imagined Battlestar Galactica and Joss Whedon-verse as well…Geeks, old and new school, will appreciate this collection written by their own.”--Booklist

Blogs: "Holly Black and Cecil Castellucci's wonderful anthology of nerdy fiction and comics, Geektastic: Stories from the Nerd Herd was a great read: the short fiction ran the gamut from soul-searing angst to high comedy and all the territory in between....All told, Geektastic is a cliche-busting, smart, and funny book about celebrating your inner mutant. Highly recommended." --boingboing.com

But my favorite review is from one of our teen Hip Scouts: "I’m not sure that I can describe how much I loved this book, but I’ll do my best. Imagine kittens sneezing adorable kitten sneezes whilst dancing on a rainbow. That’s how great Geektastic was."--Meg, 16Read more about GEEKTASTIC here, and play a game featuring the avatars, the Great Geek Escape!

Read a recent interview with Cecil and Holly here. Check out pics from our Geektastic bowling party at BEA here. And check out the fantastic Lego avatars our resident Lego expert Jonathan Lopes created for ALA: 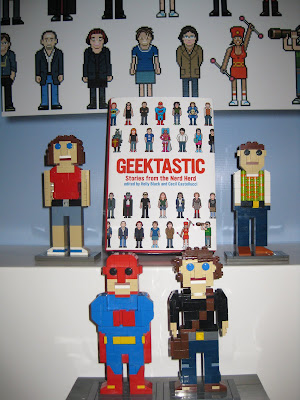 I LOVE this book. Love it.

So, how geektastic are you?
Posted by alvinaling at 8:45 AM

Email ThisBlogThis!Share to TwitterShare to FacebookShare to Pinterest
Labels: alvina, Beyond the Book, books alvina has edited, geektastic

This book looks like so much fun. I am looking forward to reading it, and I can think of a few relatives to gift a copy to. Thanks for the inside scoop on the publishing process.

My geek credentials: as a kid/teen I watched original BG, original Star Trek, Star Wars, and Lost in Space, and Dr Who (tom baker is my dr who.)

My first fanfic was a StarTrek/BG crossover with a mary sue main character.

In college, I went to a SF convention in Tarrytown NY with no idea what happened at a convention; I went to hear Madeleine L'Engle speak.