NOTE: Blogging My Poetry was previously posted at Wild Rose Reader in September.


When I began blogging at Wild Rose Reader in April 2007, there was something I had to seriously consider: Would it be wise to post my original unpublished poems there? At the time, I remember other writers who blog discussing the subject of putting our work “out there” without getting paid for it. Some thought it would be unwise. Even though I realized it might not be the smartest thing to do—I decided to post dozens of my original poems at Wild Rose Reader anyway.

Of the original poems I’ve posted there:

TWO QUESTIONS
I asked myself: Would any editors be interested in publishing a poetry collection when some of its poems had already been published on my blog? Would any anthologist/publisher ever pay me for permission to use any of these poems in anthologies?

I can answer the second question in the affirmative. Earlier this year, Graham Denton, a poet/anthologist in the UK, asked permission to use a poem I had posted at Wild Rose Reader in 2007 in an anthology he is compiling. The poem will be included in My Cat Is in Love with the Goldfish and Other Loopy Love Poems. That book is due for release next February. I also received a request from a well-known poet/anthologist who lives in the United States in August. The anthologist asked if he could use two of my poems in a special project that is being published in conjunction with The Academy of American Poets. Hooray!!! That book will be published next April. 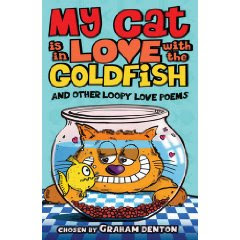 Once I started posting my original work at Wild Rose Reader I never looked back. I love writing poetry. I enjoy sharing my poetry with kidlit bloggers, poets, writers, teachers, and other visitors who stop by to read it. After all, I write because I want to share my creative thoughts with others—and once in a while, it actually pays off!

I have three original witch poems over at Wild Rose Reader.

At Political Verses, I have a double dactyl written by Julie Larios.

Laura Purdie Salas has the Poetry Friday Roundup this week.

Posted by Elaine Magliaro at 2:44 AM

I remember that your post on this topic helped me feel better about posting more of my original stuff too. Thanks for sharing this!

I'm glad I could be of help. As for myself, I felt it was better to share my poems than to keep them hidden away in my computer files.

I guess I should start thinking about submitting some of my manuscripts to publishers again. I do know that children's poetry is a hard sell. Oh well...

This is really great to know!

Congratulations!!! This is such an exciting affirmation of your work.

Thanks so much your. I surely was excited when I read the emails sent to me by those two poet/anthologists.

Congrats, Elaine -- I remember you posting about this last month, but I don't think I got a chance to leave a comment. Great news!

Thanks, Karen. It was great news for me for sure!

Congratulations, Elaine! Sharing your poetry is good, in whatever form it takes!

Thanks, Laura. I appreciate all the support you've given me--and your kind words about my work.