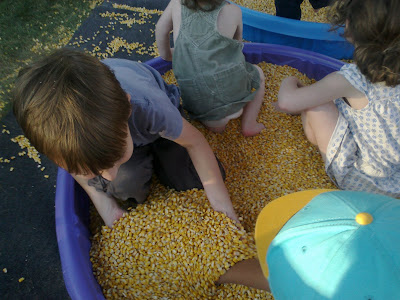 Last weekend some of the Blue Rose Girls and our friend Alissa visited Anna in her beautiful quiet cozy country cottage. As usual, conversation was the main activity -- Tilda and Juniper (Alissa's daughter) stayed close to us, eagerly joining in with smiles and babble. Neither can talk yet, but they seemed to enjoy being part of the group.

We talked about our writing (so inspiring! and so tempting to just stay in front of the fire doing that the whole time) but one afternoon we did manage to leave the house to attend the Ashfield Fall Festival, where local children make, set up, and run the games. When we arrived, Alissa's boys had already won a small bag of marbles doing things like climbing rope ladders and ringing the bell at the top. They and the other children did this with just as much excitement as the children Grace described grabbing for the brass ring at the Tuileries in Paris or the ones I described dancing at the ceilidh in the Hebrides.

The one that seemed to delight them the most was the corn bath -- tubs filled with raw corn kernels. They rolled and dug and played and only got out when the person running it said -- several times "Come on, guys, time to go -- we have to clean up." Maybe the real proof of how much fun they had was that they helped her do it. 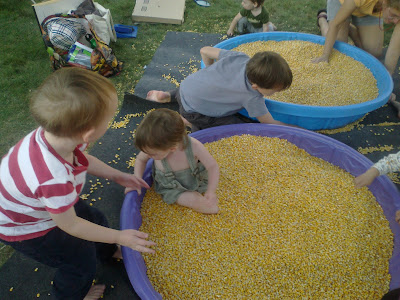 Since I got back I have been comparing this country pretty unfavorably to Scotland (though in fairness to me, at these kinds of festivals where I live, people mostly just buy things, eat, and sit listening to loud music). So it was really great to be reminded that there are communities right here in this country where people take just as active a part in their own amusement --and with just as much enthusiasm and energy. Maybe there are more of these kinds of communities here, and children are taking more delight in simple pleasures, than the media would have us think.

After all, as Grace pointed out, big companies aren't making money with things like corn baths -- maybe THAT'S why we don't see them in the media. But that's no reason not to put them in our books, even if some people do find such things old-fashioned. For others (maybe more than we, and some publishers, realize?), it's reality....and as much fun to read about, too:maybe more fun to read about than, say, Angry Birds. It depends how it's done, of course, like everything else in writing!
Posted by Libby Koponen at 8:21 AM

I've never heard of corn baths. That's probably why such a thing is not in a book. It's obviously a very local thing--kind of like how RI has dough boys. If I mentioned that in a book then I'd have to go through a whole explanation as to what it was, etc. It's neat to put that stuff in if it has a specific purpose to the story but something like a corn bath doesn't happen every day!

By the way--I hate angry birds.

I wasn't suggesting that anyone put corn baths SPECIFICALLY in books! I AM saying that these kinds of simple pleasures may be more common, and more popular, than those of us who live on the East coast may think....and that there's a valid place for them in books.