Too many books? or too few?

I have too many books, I know it, I'm trying to get rid of some. But even after filling 2 boxes, my shelves still look almost the same. 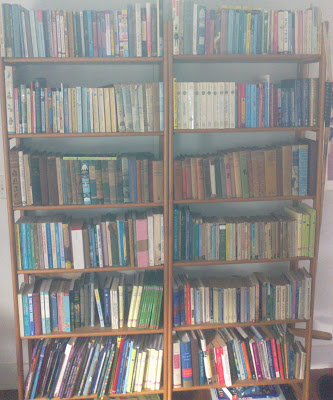 It's discouraging to think of how many more I'll have to give away or sell to make a difference. 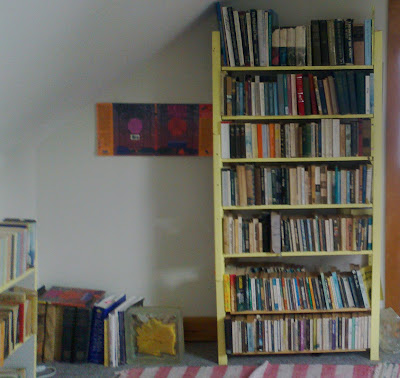 And it's so hard to get rid of them! I'm not sure why. It's not because I love my books -- I'm not even trying to part with the ones I love. But even when I don't love a book, it's still hard -- maybe because I'm admitting that I'll never read it again (or in some cases, read it at all!),

or ever go back to the places (travel books) or finish the project (books on King Arthur -- I was once going to write a book about him; make my own clothes -- books on how to that; and even, for some bizarre reason, books on learning Gnu emacs and, less bizarre, Swahili).

Maybe that's always why getting rid of things is hard: you admit that you're never going to wear the great shoes that cost $100 on sale but never fit; or that the beloved cashmere sweater, while flattering and the perfect color, has so many holes that it looks weird-- or as an English friend more kindly put it, "as though you don't care what you look like." But by getting rid of the things you're not going to do or use or wear, you make it easier to do or get the things you really want -- in this case, go to Scotland for six months!

When my resolve to get rid of something weakens, I say:
"Every box of books I get rid of now is one less to move, pack, and store later."
(will be true of kitchen stuff as well when I move on to that category.)

Okay, that's the end of one essay....another was that one thing I find myself saying as I put books in the "to sell" pile is: "Well, if I ever want to read this again, I can read it online." This, I know from experience, though, is only true for some things -- classics, say.

The books that used to form the bulk of my reading (and the publishing industry!) are those well-written books that aren't quite classics and aren't bestsellers, either. This by the way is the category Jane Austen's books were in when they first came out "People are more likely to borrow than buy my books" she said. Now, I'm thinking of the novels of people like Angela Thirkell or Patrick O'Brien -- and many others, too many to list here. Their books don't exist as ebooks -- I know, because I tried to buy them when I was loading up my ipad for my last trip to Scotland.

What's going to happen to books like this when no one (even libraries) has hard copies of anything anymore? Will they just disappear if they didn't get made into ebooks? Maybe there are both too many and too few books -- too few of the kind I really like to read.
Posted by Libby Koponen at 10:17 AM

Libby, you can never have too many books! Stick some shelves in the hallways. that's what I'm going to do. And books aren't going to disappear. Ebooks aren't going to kill them that quickly. If you read my post on my other blog about the lovely book I bought and I how much I love its cover and design you'll know that some people like me just like them as objects. You can't find that digitally. Also, and maybe I'll repost it--PW posted about a teen who said he loves reading books and doesn't like ebooks. He likes the feel of paper. So they're not going anywhere!

Meghan! I hope you're right. When I read about libraries giving away (or throwing out) all their books and replacing them with ebooks, I worry. But it's also true that libraries did that before ebooks--I remember how outraged my mother was when the SF Public Library got rid of a lot of its books (I think she said they threw them into the Bay but I may be remembering this incorrectly) to make room for FURNITURE. Not more books-- just some fancy furniture they bought.

So I am really hoping you are right! It's true that books have been around for hundreds and hundreds of years....but I also worry about publishers only publishing the mass market ones, and the kinds of novels I like to read not being published or even written anymore, and the old authors disappearing.