I met John Grisham yesterday. It happened while I was in Charlottesville for a school visit, 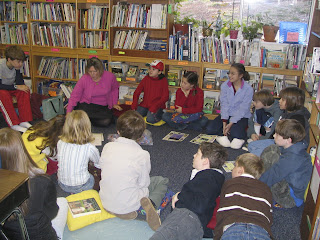 (This is me, Libby, at Anna’s old high school!)

My friend introduced us (mentioning that I was an author). This must happen to him constantly, but he shook hands and asked about my work and when I had received “that first phone call—no one ever forgets that.”

Of course I switched the subject to him and he said his agent had sent his book to over 30 people by the end of the first year; they were about to give up at the end of the second when someone, “not a well known publisher,” finally bought it.

He thought about the question – really thought – and then said no, but that when he did get really “choked up” was when THE FIRM reached number one on the best seller list. He said it had been climbing up – and when his agent called him to say it had reached #1,

Then he shook my hand and said he hoped that happened to me someday.

He talked to us for maybe two minutes – but in that short time, he managed to be interesting, sincere, and inspiring. He made me feel like an equal and as though the conversation was interesting to him, too. Let’s hope that if any of us become that famous (I’m rooting for all of us!) we will be equally gracious when other writers are introduced.
Posted by Libby Koponen at 12:23 PM

What a great experience! Thanks for sharing.

Aw, I can't believe you were at my high school! How did the visit go?

Thats cool about John Grisham, its always inspiring when people are successful and humble.