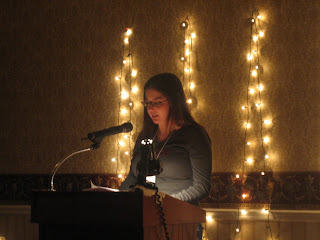 I've just returned from the Kindling Words retreat in beautiful, snowy Vermont. This was my fourth consecutive year attending, and I hope to continue to return every year in the future. The long weekend leaves me tired but happy, rejuvenated, and inspired. This is a retreat like none other, the one retreat I've found where as an editor, I am allowed to participate not as a faculty member, not as a speaker, not as a critiquer, but simply as an attendee. It's where I can gather with fellow children's book professionals--published authors, illustrators, and fellow editors--and talk craft, talk children's books, talk life, and not talk business if I don't prefer to. Over the years, I've made many dear friends, and it's wonderful to see familiar faces and meet new people.

This year's retreat started with the drive up to Vermont with my friend Katie Davis--a fun, five-plus hour drive up with nonstop chatter that helped me kick off the retreat, but also made me realize that I had done absolutely none of the recommended reading for the weekend. But Katie got me caught up with summaries of the books, and told me about two of her good friends who would be attending for the first time, Laura Ruby and Patricia McMahon.

Arriving at the Inn at Essex we immediately ran into the latter as well as Leda Schubert and National Book Award finalist Nancy Werlin. Ran into a group who had just flown in from NY, including editor Harold Underdown and Class of 2K7 member Rebecca Stead who I saw at a kid's lit drinks gathering a few months ago. On to the cocktail hour where I was greeted by Tanya Lee Stone and Marnie Brooks, ran into Susannah Reich and her husband Gary Golio who I signed up for a picture book biography of Bob Dylan last year. Yolanda Leroy (who I interned under at Charlesbridge--along with Harold) was there for the editor strand, and I said hi to my buddy Donna Freitas who I had met for the first time at Kindling Words last year when we bonded on our love of desserts. We've hung out with for many yummy sweets in New York throughout the year, including a trip to Magnolia bakery, and then Max Brenner: Chocolate by the Bald Man a few weeks ago. Co-founder Alison James, Janie Bynum, Elise Broach, Ashley Wolff, Gregory Maguire, Ellen Wittlinger, Janni Lee Simner, Diane Mayr (whose hilarious Run, Turkey Run is finally coming out this Fall with Walker), Anik McGrory... the name-dropping can go on and on and on, and there were about seventy-five attendees, so I'll stop now.

Part of what I love about Kindling Words is that everyone there is published (or at least under contract), and yet although the level of perceived "success" varies--some are just starting their children's book careers, some are more established, some old, some young, mostly women (but more men this year than ever before, including Mark Shulman--who gave me a tip on where to find the best mac and cheese in NY--and speaker Tim Wynne-Jones), the overall environment is friendly and supportive and warm, and everyone learns from one another.

I was fairly "good" this year and made myself wake up at 6:30 am both Friday and Saturday mornings to work out before breakfast, which allowed me to stuff myself silly all weekend without too much guilt. The inn is the home of the Vermont Culinary Institute, so the food was fantastic and I had dessert for both lunch and dinner every day.

Tim's author strand was fascinating, as he talked about "objective correlative" or OC, a term I had never heard of before, although the concept itself wasn't foreign. Basically, he talked about how to avoid the "f-word" (feel) and instead show what a character is feeling using the setting and the objects around her.

Caldecott-Honor winning illustrator Marjorie Priceman led the illustrator strand, and it was a pleasure to see the proof from her upcoming book. I didn't attend the illustrator strand after the first day, because the editors chose to meet for extra sessions instead, but it was great to finally meet her in person. Her book Froggie Went A-Courting had come out with my company right around when I started as an editorial assistant, and we had corresponded here and there about her book. She also now lives down the street from our former associate art director Billy Kelly in PA, and we talked about his music and his beautiful family.
Unfortunately, I ended up taking a nap after dinner and oversleeping, missing most of Virginia Euwer Wolff's keynote speech on point of view, but managed to come in for the last bit and listened in on the lively discussion at the end.

The editor strand was the best-attended it has ever been, with seven editors attending, including Harold, Yolanda, me, co-founder Mary Lee Donovan and speaker Deb Noyes Wayshak from Candlewick, Julie Romeis from Bloomsbury, and Arianne Lewin and Margaret Cardillo from Hyperion. Everyone was excited to have the opportunity to talk to fellow editors at different stages of their career and at differently-run companies. Some of the topics we tackled were salaries (using an anonymous technique that Mary Lee had learned, we discovered that our average salary was $50,500. This includes the salary of an editorial director, an executive editor, two senior editor, two editors, one associate editor, and one assistant editor), author-editor relationships, negotiating with agents, our editorial process, how to balance work and life, how to prevent burnout, what makes a good boss/assistant, and more. The editor strand is the only closed session at the conference, but we did have an editor roundtable that everyone sat in on where we discussed publicly some of these issues. 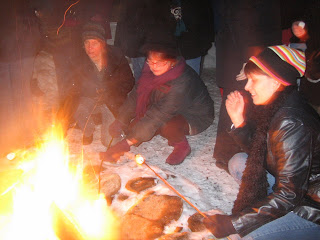 Saturday night was the traditional candlelight reading where twenty authors read five minutes from a work-in-progress or not-yet-published book. The readings as always were varied and wonderful--humorous picture books, poignant YA novels, historical fiction, chapter books, fantasy, etc. And then it was on to the bonfire where we drank hot chocolate, toasted marshmallows, sang songs, and burned pieces of paper where we wrote something we either wanted to get rid of, or a wish for the year. I wrote down one bad thing and three good things. And when we got too cold, we retired to the hospitality suite for wine, cheese, and conversations ranging from everything from what we thought of the recent ALA award-winners, certain agents, works-in-progress, and even drugs (whether it's okay to mention them in a Middle Grade book, that is).
I look forward to Kindling Words every year. For me, it's about burnout prevention; it keeps me inspired in my job. It was especially exciting this year to find that all of the editors seemed enthusiastic about coming back if their companies allow it. We also discussed having a summer retreat somewhere between Boston and New York, a weekend with just editors. If you're an editor reading this, let me know if you'd be interested in participating. We're thinking Friday night till Sunday, sometime in late July or August, nothing too expensive. And also please consider attending Kindling Words next January--we really want to keep the editor strand growing. There is no pitching of books to the editors, and in general most attendees already have their editors and publishers, so there is no pressure to try to sign people up. It truly is a relaxing atmosphere. And if you're a published author or illustrator, I highly recommend attending KW as well. It's a wonderful retreat and an inspiring experience.
Posted by alvinaling at 9:04 PM

Sounds amazing. And so what if I'm a little jealous!

Great recap, Alvina! This was without a doubt the best conference/retreat I've attended, and wild horses won't keep me away from future Kindling Words. (Can one make that plural? Oh, the pressure of being an editor.)

Thanks for the details, Alvina. And hi (I met you very briefly at SCBWI LA last August). I've wondered about attending KW in the past, and now I'm dying to go. It sounds wonderful!

Hi Alvina! I too, had a marvelous time. And, as a bonus, I felt intellectually stimulated! Thanks for the nice words about Run, Turkey, Run! --Diane

Thanks for the book, by the way. I'm halfway through it and loving it!

Alvina:
I should be more despondent I was wait-listed this year, feeling as if my KW family was leaving me behind. But reading your glowing words of your KW experience was the antidote to my blues. I missed you all this weekend. I missed the bonfire and the singing and the open mic. I missed my White Space.
I missed kindling with colleagues.

Thank you, Alvina, for reminding me of the beauty of the weekend. I'm thrilled you found joy in Vermont. I hope to get back into the bonfire-- next year. {}

Sounds like a good time! Maybe one of these years I'll attend and write it off.

Thanks for the recap, it sounds like a wonderful time was had by all!

I couldn't have said it better -- KW is such an incredible group of people, and I always leave feeling ready what what lies ahead.

BUT!!! I've forgotten the name of the bar you suggested for the February 9th kidlit drinks!! Please email me!!

Rebecca, Fuse already emailed me about it, I think we're all set. :) See you next Friday!