I was not the type of teacher or school librarian who believed in having students view videos on a regular basis--or even when I was suffering with a severe migraine headache. I always preferred reading the written word to and discussing literature with children--rather than letting them veg out in front of a TV monitor while I busied myself with another task. To be sure, I used a number of the excellent nonfiction videos we had in our school collection when I was teaching units in science and social studies. But why show a video of a picture book or a work of fiction when you can actually read the book itself? There were times, though, when I did show a video of a book after I had read the book to my students. (THE MOUSE AND THE MOTORCYCLE, which is a great video, is an example.) 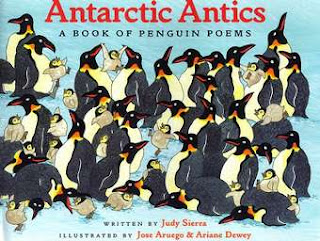 I will admit that I found some videos that were every bit as good as the books upon which they were based. Today, I am going to write about one of those videos--and it just happens to be based on one of my favorite books of children’s poetry, Judy Sierra’s ANTARCTIC ANTICS: A BOOK OF PENGUIN POEMS. If you liked the book, you’ll love the video. The 2001 recipient of the Andrew Carnegie Medal for Excellence in Children’s Video, it’s about as good as children’s videos get...and it's a delight from start to finish. I give it my highest recommendation--my own two thumbs up! (Note: Paul R. Gagne received the medal for Weston Woods, producer of the video.)

Here is an excerpt of the statement from the Carnegie Medal pages at the ALSC website describing the ANTARCTIC ANTICS video: “…transforms the poetry of the book into ballads of the penguin world. Playful animation and original musical compositions enliven the tone of each poem and endearing penguins have wide appeal and unforgettable personalities, leaving viewers with warm feelings for the coldest place on earth.”

Yes, the poetry from this popular book was put to music! The poems make wonderful song lyrics--and the musical score composed by Scotty Huff and Robert Reynolds is terrific. I purchased a copy of the video to show to the students in the children’s literature course that I teach. Often, several students leave the class session when we view the video singing some of the "penguin" tunes.

The ANTARCTIC ANTICS video was animated by FableVision Studios. (Kudos to FableVision for retaining the artistic style of illustrations created by Jose Aruego and Ariane Dewey for the picture book.) The video was directed by Gary Goldberger and Peter Reynolds. You know Peter Reynolds. He’s the author and illustrator of ISH and THE DOT and illustrator of the popular Judy Moody series written by Meghan McDonald. Peter also happens to be the founder and president of FableVision Studios.

You can view a video clip of ANTARCTIC ANTICS at the Weston Woods/Scholastic website.

About the Book: ANTARCTIC ANTICS is a book of light-hearted rhythmic and rhyming poetry about "the real lives and habits of emperor penguins" and of their time spent on the coldest continent on earth or in the icy waters surrounding it. Some of the poem titles include A Hatchling's Song, Regurgitate, I Am Looking for My Mother, My Father’s Feet, Belly Sliding, and Be My Penguin—a love poem. It also contains three predator riddles about the killer whale, the leopard seal, and the skua bird.

My elementary students loved this book. They enjoyed memorizing and reciting the poems in class and in the library. And after viewing the video, many of them even began singing the poems.

In the introduction to Karla Kuskin's NEAR THE WINDOW TREE, a book of children's poetry, the author writes: "Make poetry accessible to children and they will have a form of self-expression as satisfying as singing or shouting." The poetry in ANTARCTIC ANTICS is definitely accessible to young children...and it's tailor-made for joyful singing.

Posted by Elaine Magliaro at 2:50 AM