So, here is some free advice to children's book authors and illustrators who know they probably will not win one of those fancy library awards: plan a school visit on the day the awards are announced.

Or maybe it should be "plan a school visit in San Antonio, TX." Because, that's where I was, and thanks to the lovely librarians and their excited students it was a fantastic day. I didn't even think about being a non-contender. I didn't even care.

And why should I?

I had wonderful and extremely fashionable teachers waiting for me and my Bringing in the New Year presentation with hand-made dragons--one even had eyes that lit up.

And there were the welcoming librarians, such as Kim Green the super-coordinator who not only organized my visits (I was there a week) but also organized an amazing Robert's Snow-inspired fundraiser at her school (proceeds going to Dana-Farber). See that big bag she is holding? It is all full of coins that the students brought in. There is a reason why she has to hold it with two hands--it is HEAVY. They were still counting when I left, they were over $600 at that point. Isn't that amazing? And that is just her school. All the schools I visited that week did some sort of charity, inspired by Robert's Snow. Wow. 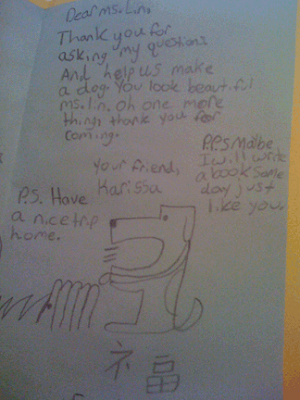 And then of course the students! What can be better than a captive audience, thrilled to hear your book? They enthusiastic and attentive and, also, very sweet. Not only did they say the loved my books (and I was their favorite author ever), they even told me I was pretty. What are the chances the award-winners were told that?

Because, this is what we make children's books for--the children. As I've said before, kids loving your book(s)is truly the best award. Better than one of those stickers. Or at least close.

THANK YOU, SAN ANTONIO SCHOOLS!
Posted by Grace Lin at 7:00 AM