Beyond the Book: SHARK VS TRAIN by Chris Barton and Tom Lichtenheld

Beyond the Book: SHARK VS TRAIN by Chris Barton and Tom Lichtenheld 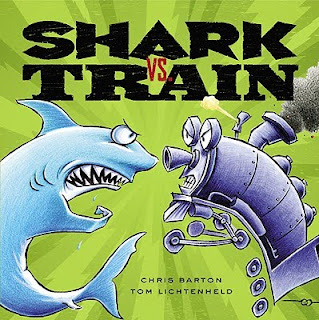 Then, watch the unofficial trailer (filmed at our company Halloween party last year):

How did we get to this wackiness? Well, it went like this:

I'd been corresponding here and there with author Chris Barton for probably over five years--and by "corresponding" I mean that he would send me a manuscript and then I would decline it, but invite him to send more. During that time he eventually found a fantastic agent, who sent me a manuscript titled "Shark vs. Train." I was intrigued by that title. And when I read the manuscript, I was intrigued even more. Heck, I was more than intrigued, I was in love. It was so wacky, so deliciously random and bizarre, and best of all, it was so childlike and child friendly.

The concept is this: a train and a shark battle it out in different environments. For example, who wins when they're underwater, in Shark's natural habitat? Shark, of course--Train helplessly sinks to the bottom of the ocean. But Train wins on the train tracks, while Shark struggles to pull heavy cars. But then Shark wins at a pie-eating contest, and Train wins in a burping contest. The battle goes back and forth until towards the end you realize that neither one is winning. This is one of my favorite "nobody wins" pages: 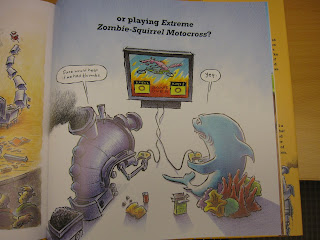 Train: Sure would help if we had thumbs.
Shark: Yep.
I knew that it might be hard to imagine the final product without illustrations. And so before I brought this to our acquisitions meeting, I had to think very carefully how I would present the project. I wanted to make it clear how one should think about the book, and so this was how I positioned it on the proposal:

Handle: Celebrity Deathmatch meets the World Wrestling Entertainment as a shark and a train battle it out

This is what I placed at the beginning of description:

And because I knew the book was so visual, I decided to ask two of the designers here to do a quick sketch for some of the scenes. Then I literally cut and pasted them into the manuscript that was distributed. Arts and crafts, anyone? Here is an example (my apologies for the quality--didn't have a scanner available): 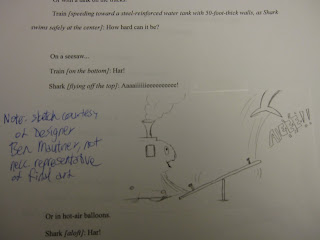 And so how did illustrator Tom Lichtenheld come into the picture? Little, Brown had published two of his books previously, What Are You So Grumpy About? and What's With This Room? I became Tom's contact editor after his original editor left the company, and we had been discussing possible future projects when Shark vs. Train crossed my desk. Tom was immediately one of the illustrators I thoughts of. And when I asked Chris who was on his dream illustrator list, Tom was also one of his choices--it felt meant to be! ALSO a good sign: Tom, who lives in the Chicago area, happened to be in NY the week before our acquisitions meeting, and even though we generally don't ask for an illustrator to commit to a project before we sign it up officially, I decided to just run it by him to see if he would be at all interested. Tom sat in my office and read the manuscript and chuckled all the way through it. A good sign. He went home and did some character sketches for the book, even though he knew we had yet to sign it up. Also a good sign. These sketches were also included in the materials I distributed to our acquisitions committee. 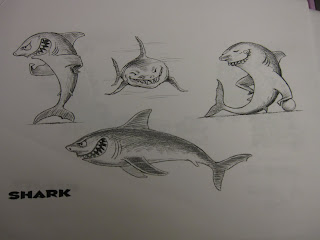 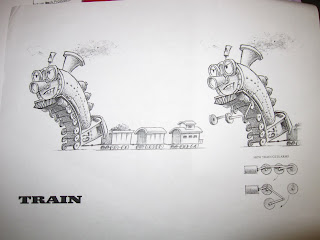 Little, Brown vs. Other Publisher: Who Will Win?

We won the text in a two-round auction, and then officially approached Tom to illustrate. He accepted with the caveat that he could work closely with the author on the text, something that Chris agreed to readily. This was an unusual process, because generally the author and illustrate do not collaborate directly. Every book "takes a village" to create, but in this case, it was a true collaboration in every sense of the word, from Tom and Chris, to me, the designer Maria Mercado, our art director, editor-in-chief, production manager, etc etc. Tom and Chris met in person to work on the book. Tom, Chris, and I had many many conference calls to hash out the different scenarios. I would talk to both Chris and Tom separately as well. Tom and Maria would go back and forth regarding the design. Even the final cover and the bright green color was a collaboration--the original cover design was yellow, but when we saw a mock-up of a catalog cover that our marketing designers had done, we decided that the green with lightening bolts was the way to go--it was a eleventh hour change. So, what do you think, was it a good choice? 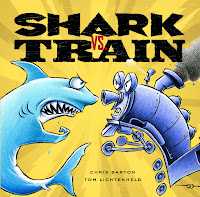 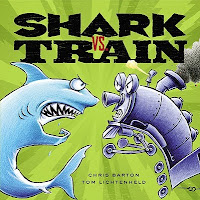 The beginning was another challenge. This was a book that not everyone "got" right away, and we felt we needed a framing device that made the match-up make sense. Why were Shark and Train battling it out in the first place? It came down to two options.  The first was an ellaborate comic-style sequence that had Shark and Train meeting in an antagonistic way: 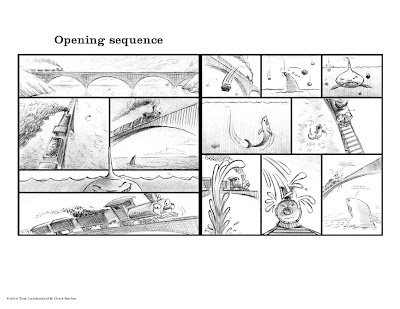 But we settled on the perfect opening of two kids playing with toys. After all, Chris's original inspiration for the book was watching his two sons play. So this felt right: 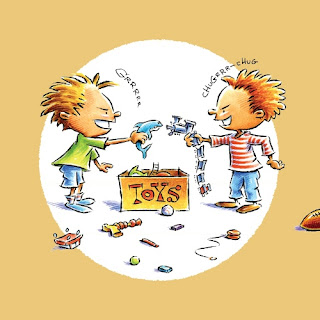 Check out this great post about Shark vs Train over at Seven Impossible Things Before Breakfast, including a ton of outtakes that didn't make it into the final book. The possibilities are endless!

I love this book, and I think little boys (and girls!) are going to love it, too. And of all of the picture books I've edited, this is the one that all of the men in the office ask about. One in particular come into my office on several occasions asking if the book was in yet. He pretended to want it for his baby daughter, but I knew better. But here's a picture of the little fan: 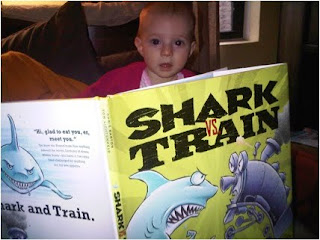 So, are you Team Shark or Team Train? Visit the website to vote! 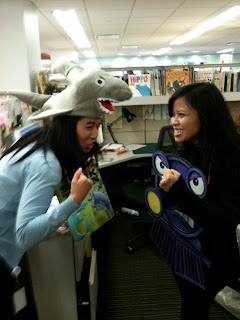 Shark vs Train has received three starred reviews so far:
"This inspired pairing, executed with ingenuity and packed with action and humor, is a sure winner." --School Library Journal, starred review

"This is a genius concept." --Publisher's Weekly, starred review

"A glum train in smoky dejection, or a bewildered, crestfallen shark? It's hard to choose; both are winners." --Kirkus, starred review
Posted by alvinaling at 9:30 AM

Great post, Alvina! It's nice to get a glipse into the "behind the scenes" process. :)

Whta a fab-sounding bok - and thank you for taking us behind the scenes.The trailers are both great - who's the narrator in the "official" one? I empathise with your colleagues. Of course I'll only want to get it for my boys ;-)

The narrator is actually the publisher of our Orbit imprint, Tim Holman. We really wanted a David Attenborough-like narrator, and decided to use in-house talent!

I'm a forever fan of shark and train and Chris Barton. Thanks for the behind-the-scenes look!

I can't imagine this book WITHOUT Tom's hilarious Cartoon Illustration!!! It screamed for an Illustrator with a great sense of humour and Tom has this tot he max!
One of my favorite books is "What Are You So Grumpy About"!
There aren't many pic books out there for boys and so what better then sharks and trains and competition (three of their favorite things) I can see a lot of Dads too, being thrilled to get away from reading yet another pinky princess book at bedtime:)

Thanks for giving us all a glimpse behind the curtain of how "Shark vs Train" developed. The illustrations definitely enriched the text of the book and created a hook. This is a story that might never have evolved beyond swimming with plankton without the extra efforts. Great work!