On Sunday afternoon BRG friend Alissa offered me an extra ticket she had to Cartoonapalooza, a fundraiser at the Northampton Academy for the local library's children's room. So I took a couple hours off of painting Greta to go see what it was all about.

The afternoon was hosted by Mo Willems, and consisted of animations of his books and some clips from his many years writing for Sesame Street. I was psyched since I've never seen him present before and I loved Sesame Street as a kid. Also I was sitting in an audience of tiny children who laughed hysterically at the slap stick, yelled heartily that NO, you canNOT drive the bus pigeon!, and seemed to generally be having a jolly old time. 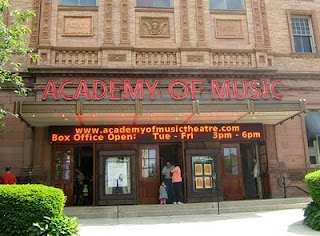 Mo introduced the clips, then answered questions at the end (questions such as "will you do the pigeon's voice?" to which he responded "I am doing it right now"): 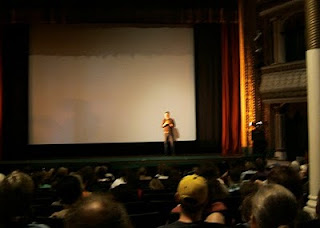 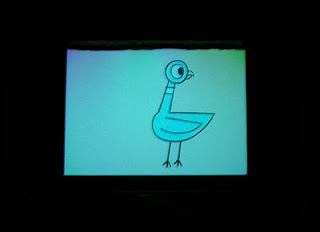 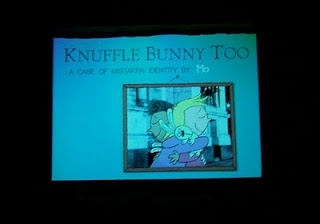 And of course all the great Sesame Street clips we know and love were just as funny and bizarre as they always were: 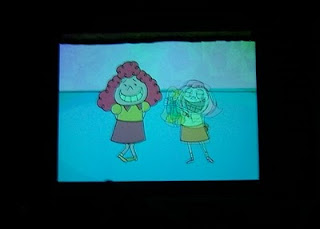 Thanks for taking my place! I also heard you deftly prevented a meltdown over spilled popcorn by sacrificing some from your own bag! Stellar.

Thanks for letting me take your ticket! Always happy to share my popcorn with Leo :)

That sounds like so much fun it almost makes me wish I lived in Northampton! :-)

I also liked DON'T LET THE PIGEON DRIVE THE BUS but never appreciated its greatness until I read it (about ten times in a row on the first reading) to a two-year old last summer.

I can also imagine the near-tragedy, averted thanks to your sacrifice.