Valerie Worth (1933-1994) is one of my children’s poetry idols. A recipient of the NCTE Award for Excellence in Poetry for Children in 1991, Worth was an incredible crafter of poems. For the most part, her poetry spoke of little and seemingly insignificant creatures and things: crickets, a slug, an amoeba, pebbles, a safety pin, a hose, weeds, potatoes, and mud. Yet, in her “small” poems, she made the mundane seem marvelous; she carved the commonplace into fine art.

I was so excited when I opened a package from Farrar, Straus and Giroux a few weeks ago. Inside the large, padded envelope was ANIMAL POEMS, the second book of Valerie Worth’s poetry to be published posthumously. It was a review copy sent to me by the publisher. Imagine a book with twenty-three new Worth poems—poems that were not published in her earlier collections. It was like a little miracle. What makes the book even more special is the art done by Steve Jenkins to illustrate Worth's poetry.

To quote the beginning lines of a poem by my friend, the late David McCord:

Books fall open,
you fall in,
delighted where
you’ve never been…

Yes, I fell right into Worth’s book of animal poems. I was delighted and dazzled by the way she wrote about rabbits and minnows, the gorilla and the hummingbird—by the way she perceived these animals with her poet’s eye.

ANIMAL POEMS is quintessential Worth—another tour de force of poetry writing. Its poems are imbued with rich vocabulary and the precise use of words. The images are original and fresh and the figurative language is par excellence. If words were carbon, I have little doubt that Valerie Worth would have been able to fashion flawless diamonds.


A Close-up Look at Some of the Animal Poems

Look at Worth’s use of the letter “l” in the poem Snake. As you read the following lines, you’ll see how her language slips off the tongue. With the sounds of words, she captures the fluid movement of this legless reptile.

Loosed
From
Limbs to
Run like water,
Spilled to
A liquid
Silt, a
Slurry
Of scales…

She goes on to compare the snake and its movement…

To one
Glazed
Stream
Of latticed
Panes, or
Mottled mosaic
Of pebbles
Tumbled
Smoothly along,
Their slender
Landslide
Filing
Down
The narrow
Channel
Grooved by
The guiding
Head…

Look at Worth’s use of language and rhythm to describe how minnows, “glisteners that shine,” and their coordinated movements in a school make them appear to be the body of one fish.

That their slivers
Sift together

In a scintillating
Mesh,

Of a solid
Silver fish.
Here is the full text of Bear—along with its accompanying illustration by Steve Jenkins. Note how the bear stares out at us from the page—how Jenkins captured the essence of Worth’s poem.

The bear’s fur
Is gentle but
His eye is not:

It burns our
Way, while
He walks right

And left, back
And forth, before
Us: he

Looks, and we
Look, and his
Hot eye

Stings out
From the dark hive
Of his head 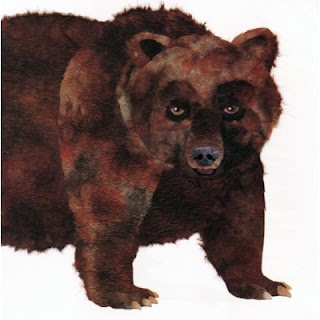 I am always surprised by Worth’s poetry, in awe of her exquisite use of language. Who else could describe a gorilla as “that/Glaring/Legendary/Ogre/Of rough/Black iron/And ebony?” Who else could imagine a porcupine to be “Held fast/In the thicket/Of its own/Thorns?”

For the book, Steve Jenkins set most of his animal collages against plain white or blue or black backgrounds. There is a simple elegance to his illustrations—just as there is an easy elegance to the words of Valerie Worth. His art is a fine and respectful complement to her poetry. 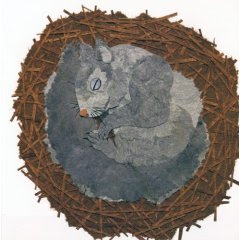 ANIMAL POEMS is an outstanding poetry book. Every two-page spread contains a gem—a finely cut, multi-faceted poem, which sparkles like a diamond in the sunlight—a poem that rests on a platinum setting carefully crafted by Jenkins. I think this will be one of the most notable children’s books of 2007.

A Little More Worth

Valerie Worth was an artist who worked in a medium of words—and with words, she was able to create distinctly defined images that a reader could picture in his/her mind’s eye. She saw—and showed us how to see—the wonder of the “small” things. She could make the most mundane objects, insignificant creatures—and even garbage—seem like treasure.

From EARTHWORMS
(This poem first appeared in MORE SMALL POEMS.)

Put on the palm,
Still rough
With crumbs,
They roll and
Glisten in the sun
As fresh
As new rubies
Dug out of
Deepest earth

Some people think that young children don’t like poems with lots of imagery and figurative language. Some people believe that young children only enjoy humorous poetry or poetry that rhymes. I do not agree with them. Children often come to value what the adults in their lives value. If children are exposed to fine poetry like that of Valerie Worth, most will come to understand and appreciate it. I shared Worth’s poetry with my second grade students often. Some of them came to appreciate her poetry so much that they tried to emulate her writing style when they were creating their own poems.

I believe there is no better way to teach children how to write well than to read them fine literature—especially poetry. And Valerie Worth was—and always will be—one of the finest writers of poetry for children.

For those of you who may doubt my words, I provide the following:

STARS
by Valerie Worth
(This poem can be found in STILL MORE SMALL POEMS and ALL THE SMALL POEMS AND FOURTEEN MORE, both published by Farrar, Straus and Giroux.)

While we
Know they are
Enormous suns,
Gold lashing
Fire-oceans,
Seas of heavy silver flame,

They look as
Though they could
Be swept
Down, and heaped,
Cold crystal
Sparks, in one
Cupped palm.

When I look up in space
at night
I see stars
that look like cold silver crystals
so small they could fit
in my hand.
But I know
the stars are giants
exploding gases
and bubbling with red flames.


I hope I proved my point!


Other Poetry Books by Valerie Worth


Happy Poetry Friday!
Posted by Elaine Magliaro at 7:45 AM

I love Valerie Worth so I am really happy to see this review! You did a wonderful job of showcasing her work.

I am interested to notice that you posted permission from the publisher too. That is something I have been wondering about. I don't like posting just half a poem for Friday Poetry with a link to the rest on another site, as I think that breaks the beauty of the poems. I don't want to post things against copywrite either. I guess you decided to solve that dilemma by asking permission for the art and poetry quoted here. I guess you have to plan ahead to do that. I usually don't choose a poem till Friday morning. I have been thinking of dropping out of Friday Poetry because of this discomfort...

I usually just post portions of poems in my reviews--and I usually review books I have bought myself. FSG sent me a review copy of ANIMAL POEMS. I wanted to use some longer portions of poems so I checked with the person at FSG who sent me the book to find out what I could be permitted to post. I was asked to include that information with my review.

Don't drop out of Poetry Friday! That's an order.

Your haiku poetry and the beautiful photographs you post with them are wonderful. I think they would make great Poetry Friday posts. There are also poems in the public domain. Some Poetry Friday posters provide a portion of a poem and a link to the full text at another website.

Beautiful poems, Elaine. I'm excited to hear about the new book. Thanks!

Mitigator Rules!
I can recommend a new “scrub” product called “Mitigator Sting & Bite Treatment”; to say that it is terrific is an understatement! It actually removes venom by exfoliating the top layer of skin, opening the pores and drawing out the toxins. I had instant relief from pain and itching and all traces of the sting disappeared within minutes. I found it on the web at http://www.mitigator.net. I called and they sold me (6) ½ ounce packages for about $2.00/pack (each resealable pack treats about 20 stings or bites). The only thing that can create a problem is if you wait too long to apply it, it should be rubbed in vigorously within the first few minutes after the bite or sting – the longer you wait, the less effective it is. I’ve used it on bees, wasps, fire ants (no blisters even appeared), mosquitoes and chiggers. They say it works on jellyfish but I’m a long way from the ocean so I haven’t needed it for that problem. No smelly chemicals, works great and is even safe for kids (the scrubbing replaces scratching so – no secondary infections). I should make a commercial for them!

Valerie Worth is one of my favorite poets for children. I am so happy to see that that are releasing more of her poems. I so agree with your thoughts about children and poetry.