POETRY FRIDAY: This Is Just to Say 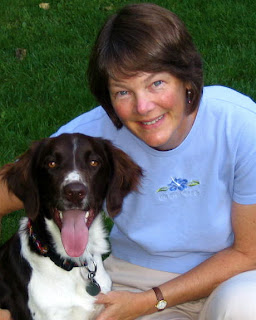 THIS IS JUST TO SAY, Joyce Sidman’s new poetry collection, is now available. Most of you may know that Sidman is the winner of the first Cybils Award for Poetry for her outstanding book BUTTERFLY EYES AND OTHER SECRETS OF THE MEADOW. I just picked up my copy of THIS IS JUST TO SAY on Tuesday—and couldn’t wait to write a review of the book. 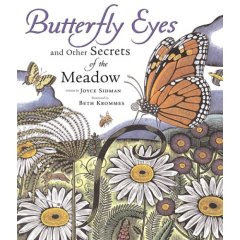 On Wednesday morning, I wrote to Joyce Sidman. I told her I thought her most recent book was quite a departure from her other poetry collections. I also asked her if there was anything she would like to tell readers of the Blue Rose Girls blog about her new book of poems. Within an hour, Joyce emailed me her response! (How great is that?)

Here is what Joyce Sidman wrote:

Yes, THIS IS JUST TO SAY is very different from my other books. It is the only one so far to have come out of my work as a writer-in-residence at schools. The "sorry" poem is a lesson I do with kids, using W. C. Williams' poem as a model. They apologize for all sorts of things--things that we adults can't imagine they'd worry about! It started me thinking about the guilt we carry around--what things we regret, and why. "Sparkling Deer" is straight from my life (see jacketflap)--as are a few other poems which I won't claim!

This book came pouring out of me in a way that other books haven't; the characters seemed to come alive and talk to me. In fact, I'm still not sure which "Anonymous" student stole the lizard . . . I think my favorite poem is "The River of Forgiveness," which is such a hard river to cross, and yet so important to our growth as human beings and our ability to truly love one another. 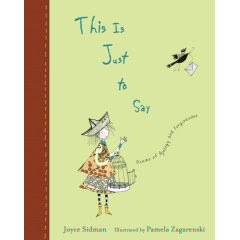 Mrs. Mertz, a sixth grade teacher, asks her students to write poems of apology modeled after the famous poem about the cold, delicious plums written by William Carlos Williams. The children like their “sorry” poems so much they compile them in a book. Then they get the people to whom they wrote their poetic apologies to write responses. Bao Vang, one of the students, illustrates the book with the help of the art teacher.

Organization of THIS IS JUST TO SAY
- Table of contents
- Introduction written by “student” Anthony K.
- This Is Just to Say, the poem by William Carlos Williams
- Part 1: Apologies
- Part 2: Responses

Sidman displays her poetic versatility in THIS IS JUST TO SAY—a book in which each poem is, supposedly, written by a different individual. The author captures a variety of tones and voices in her poetry. Because of the nature of this book, many of its poems are less lyrical than those found in the author’s other works. Sidman does, however, include quite a bit of figurative language. For example, in What Was I Thinking?, Mai Lee writes that the principal’s dress “is the color of ripe plums”; that the principal’s eyes “are like hot sparks”; and that she, Mai Lee, slinks out of the principal’s office “like a whipped dog.” Sidman also includes a number of different poetic forms. There is a pantoum(unrhymed), a haiku, a poem in two voices, and a takeoff of Roses Are Red.

Sidman provides a whole range of reasons for why the young poets have feelings of guilt: hitting a friend too hard with a dodge ball, making fun of the dress a teacher is wearing just to get a laugh in class, pilfering jelly doughnuts from the teachers’ lounge, stabbing a sister with a pencil, breaking a mother’s precious glass deer, stealing the class lizard that dies in the thief’s possession. There is a poem by Anthony apologizing to his disappointed mother for not winning a spelling bee—a poem that reveals the angst of a child who feels pressured to always be a champion. In one poem, a child apologizes to her absent father for not being perfect—for being the reason he keeps leaving home. In some of the poems, the young writers reveal a true sense of sadness and remorse; in others, the writers appear to be—at most—mildly apologetic.

Some response poems provide sincere forgiveness to the “guilty” parties who wrote the apology poems; some response poems are written by people who were not the intended receivers of the “sorry” poems. For example, Tenzin pens the response to Anthony—not Anthony’s mother—and Ricky responds to the poem he wrote to his hamster Manga in the voice of Manga, the pet he had apologized to for keeping him locked up in a cage.

Some of the poems are very serious in nature; some are light-hearted and have a touch of humor.

From FASHION SENSE
Written by Carmen to Mrs. Metz, her teacher

I am so sorry for my rude words.

The classroom was so dead.
No one had anything more to say about Old Yeller,
and we were all crazy to go outside.
The silence seemed like a hundred crushing elephants.
So I raised my hand and made that comment
about your dress,
and everyone burst out laughing.

You smiled,
but your smile looked like a frozen pond.

Carmen goes on to explain how she feels “like a traitor” and how the words that slipped from her mouth keep echoing in her head. Then she writes:

You are really a queen, not a princess.
Our queen. Reina de la clase.
I hope you will overlook the transgressions
of your loyal but loud-mouthed subject
and forgive me…

Mrs. Mertz responds to her student in her HAIKU FOR CARMEN

Just these few warm words,
and spring sunlight fills the room;
my dress turns to sky.

There’s The Black Spot, written by Alyssa to Carrie, in which the writer apologizes for stabbing her sister with a pencil. Alyssa explains how there are two black spots left to remind her of her nasty deed: the dark spot on her sister’s palm and “the nugget of darkness/that made me stab you.” The poem ends:

Alyssa responds to Carrie’s apology in ROSES ARE RED

Roses are red,
violets are blue.
I’m still really
pissed off at you.

The poems in THIS IS JUST TO SAY encompass a myriad of emotions that children actually feel. Sidman has worked with youngsters and it is evident she understands their “inner world.” I think this collection of apology and response poems would be an excellent springboard for a poetry writing exercise and would also be an exceptional vehicle for helping children learn how to express their feelings on paper.

Here I am,
reading Mai Lee’s poem.
I am wading into the river of forgiveness…
Thinking…
…of confusion,
and the fear that crushes your heart
when you’ve done something wrong…

Will I ever make it across?
I keep thinking of a friend
who helped explain the world,
whose hand is always around my shoulder,
a friend who stands with me in the crowd.
There she is—my friend,
on the other side of the river.

This poem ends happily with words telling Mai Lee that Bao Vang has crossed the river and forgiven her.

THIS IS JUST TO SAY includes seventeen “sorry” poems and seventeen response poems. I think that it's another terrific package from one the best poets writing for children today.

Note: This is just to say that THIS IS JUST TO SAY is a great collection of poems for kids...and adults! It’s an inspiration for creative writing. I wrote a poem of apology and a response poem after reading the book.

Thanks for the inspiration, Joyce!!! And thanks for giving me permission to include excerpts from your new book in my review.

The following two poems were written by Elaine Magliaro; they were not taken from Joyce Sidman’s book.

This Is Just to Say: A Poem to My Daughter

I have eaten
the chocolate bunny
I bought you
for Easter

a big-eared, brown hunk
of deliciousness
you probably saw
hidden
in the closet
and were expecting
to unwrap and savor
on a flower-filled Sunday

Forgive me
it was bittersweet
and creamy
and melted in my mouth
like snow
on the first warm day
of Spring.

A Daughter’s Response to Sweets-loving Mother

Mom! How could you???
You know
I love chocolate, too!

You’re an adult
and should have better control
of your candy cravings.
Set an example
for your only child
who also has
a significant sweet tooth.

Next year,
open your wallet a little wider
and buy two bittersweet bunnies
so we can rhapsodize
in a duet
of ooohhhs and uuummmms
and indulge
in our chocolate Easter dreams
together

Pamela Zagarenski did the artwork for THIS IS JUST TO SAY—and I would “say” that her illustrations definitely complement Sidman’s text. Zagarenski’s mixed media illustrations are hip, playful, expressionistic, and add touches of humor in just the right spots. I'd like to add that I was really impressed with the art she did for Maxine Kumin’s poetry collection MITES TO MASTODONS, which was nominated for a Cybils Poetry Award last year. 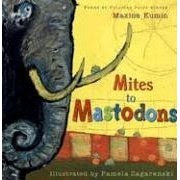 Email ThisBlogThis!Share to TwitterShare to FacebookShare to Pinterest
Labels: children's poetry, Joyce Sidman, This Is Just to Say

This book looks great! Elaine, I liked your poems alot too.