COMETS, STARS, THE MOON, AND MARS
Poems and Paintings
by
Douglas Florian
Harcourt, Inc.
2007
Last Friday, I had just returned home from the Banbury Cross Children’s Bookshop with a copy of Douglas Florian’s newest poetry collection, COMETS, STARS, THE MOON, AND MARS: SPACE POEMS AND PAINTINGS, and had sat down at my computer to troll the kidlit blogs…when I came upon Roger Sutton’s post “Keeping Up.”

Roger wrote:
“It's an unfortunate fact of life-in-print that books get overtaken by events, and Horn Book editors have been busy blue-penciling reviews of all the astronomy books that haven't caught up with the events of August 26th of last year…”

Leave it to a children's poet to keep up with the planetary times. Yes, that poem about Pluto was taken from Douglas Florian’s new book—and COMETS, STARS, THE MOON, AND MARS is a fine poetry collection. It comes in the same large square format as all of his books of animal poems. Each of the book’s illustrations spans a two-page spread—and every two-page spread contains one poem printed in large size text. The illustrations, done with gouache, collage, and rubber stamps on primed brown paper bags, are bold statements. Many include symbols, objects, and words related thematically to the subject of each poem. For example, the painting that illustrates the poem about the planet Neptune includes a cutout picture of a mosaic of the god Neptune’s face, the top of a trident, and a small ancient sailing vessel. Many pages also have small circular cutouts in them, which give the effect when one reads the book of peering through a telescope into another page of Florian’s artistic cosmos.

In his poems, Florian writes about the EIGHT planets, the asteroids, the phases of the moon, the names of constellations, the different shapes of galaxies, a comet, the gravitational pull of a black hole, “the great beyond”…and, of course, the once-upon-a-time-but-no-longer-a-planet-anymore Pluto. This book is traditional Florian. Its poems are rhythmic, rhyming, and light-hearted. He coins some inventive language: super-dupiter Jupiterterrific and Saturning. And while his verse may be playful in nature, Florian is adept at including tidbits of astronomic information in his poems. Let me provide you with some examples of this:

Gaseous like Neptune,
But slightly more wide.
Heaven knows how
It got knocked on its side.

The painting that accompanies this poem illustrates how Uranus’s rings "appear" to spin around the blue-green gassy sphere--or sideways planet--from pole to pole rather than its equator because of the odd way in which the planet rotates.

A HALF moon is half dark, half light.
At sunset look due south to sight.

Although not every poem in this collection blazes like a supernova on the page or closes with a pithy ending or clever turn of phrase, most shine with bouncy meter and enough delicious end rhymes to delight young readers. COMETS, STARS, THE MOON, AND MARS is an excellent book to use in conjunction with a unit of study about space. Not only does the collection contain poetry that will appeal to children and entice memorization—it includes “A Galactic Glossary” with additional information about the subjects of all the poems and a selected bibliography for further reading. Yes, Florian did his celestial homework—and, heaven knows, he succeeded in writing another poetry collection that is sure to be a favorite with young children.

Florian aptly ends this book with the poem The Great Beyond—and ends the final poem with a little “play” on words.

From THE GREAT BEYOND

Great galaxies spin,
While bright comets race.
And I’d tell you more,
But I’ve run out of space.
Florian's latest collection deserves a gold star!
COMETS, STARS, THE MOON, AND MARS is blasting off the publishing launch pad at an opportune time. The best children’s poetry books about astronomy--Myra Cohn Livington’s SPACE SONGS, Lee Bennett Hopkins’s BLAST OFF!: POEMS ABOUT SPACE, and Seymour Simon’s STAR WALK--have been unceremoniously sucked into the out-of-print black hole of the literary universe. (The sound of weeping, gnashing of teeth, and slamming of doors!) 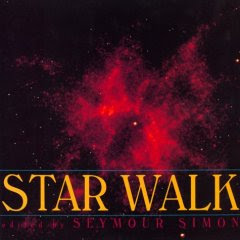 Here is a poem of address that was written by one of my second grade classes on March 3, 1996:
Comet,
shooting around in space,
whizzing past the sun,
your long tail glowing,
where are you going?

Click on Budding Poets and you will slip through a wormhole and emerge in an outta this world galaxy of prize-winning children’s science poems written by my second grade students in 2000.


I will leave you with a silly little ditty that I wrote many moons ago. I just changed the last line yesterday.

Hickory dickory docket,
I sped into space in a rocket.
I traveled past Mars
And seventeen stars
With a picture of Earth in my locket.

Just one more poem from an astronomy buff! I wrote the following old moldering poem nearly twenty years ago.

Tiny planets
together in a cosmic kindergarten
holding hands in a circle
playing Ring around the Sun
yearning to grow up
and have orbits of their own
Posted by Elaine Magliaro at 8:10 AM

Hi Elaine,
Thanks for the wonderful review. I went right out and ordered a copy of the book when I read Roger's post. We have been bemoaning the fact that the state standards in science won't be rewritten for another 2 years, so the powers that be have decided to keep Pluto in as a planet until then! (This is where I shake my head.)
And since St. Patrick's day is almost here, let me say that I love your limerick.
Have a great weekend!
Tricia

It's hard to believe that teachers will be asked to teach incorrect information...for two years! Ah! The "powers that be" are often the reason teachers get blamed for poor public school education. I used to shake my head a lot--but I didn't always bite my tongue when I felt the urge to speak out about some stupid educational practice adminstrators tried to foist on those of us who actually spent time working with children.

Thanks for the kind words!

Great review. I want to see this one. Thanks!

I went to the symphony last Friday, where the L.A. Phil performed Holst's The Planets, and for a moment I got nervous (sad? antsy?), wondering what Pluto's treatment was going to be. Then I realized this had been composed in 1925, and Pluto wasn't discovered until 1930. Holst's work had come around in time again.

I used to play a tape of Holst's "The Planets" for my second graders during our unit of study on space. Thanks for the information about the year of the music's composition. I wonder how Clyde Tombaugh's family feels now that his great discovery has been demoted to second class planetary status. Tombaugh passed away a decade ago. At least he never knew about the demotion of poor Pluto.

I'm a huuuuge Douglas Florian fan and will undoubtedly get this book, but to toot my own horn, on the day of the Pluto news, I believe I was the first children's poet to deal with the issue. It's such a short ditty that I can't even in good conscience link to it:

Poor Pluto.
Got the boot-o.

(actually, here's the link because there's a fine Pluto Fib in the comments)

I, too, am a fan of Florian's poetry. My favorite Florian book is INSECTLOPEDIA.

I like your little Pluto ditty. I think you should give it a really looooonnnng title.