The Publication Story of WABI SABI, Part 3 (complete with the mystery of the missing art...) 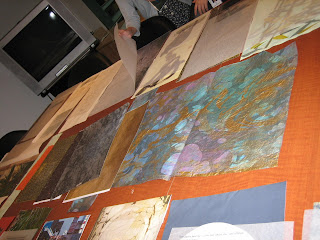 To refresh your memory of the story, you can go back and read Parts 1 and 2. Where I left off was with Wabi Sabi was accepted in our acquisitions committee.
Because Ed Young lives not too far from NY City, he came down to meet with me and the designer at the time, our Creative Director Gail Doobinin. We discussed what the format of the book would be. Ed suggested the possibility of doing the book as an accordion format, so it could stand almost up as a Japanese screen would. But we fairly quickly moved on from this idea, as it seemed too complicated for this book, not "wabi sabi" enough--we wanted simplicity. But at the same time, we also wanted it to stand out, so we eventually settled on a larger-than-usual trim size (11 x 11), and as Ed imagined the images oriented more vertically than horizontally, we decided on a calendar orientation, so the book would open upwards, rather than open horizontally.
Ed got right to work on the art. At one point he brought the art into the office at a very early stage--it was hard for me to see what the finished pieces would look like, although I thought his choices of paper were gorgeous.
Gail and I went up to his studio at a later stage--his studio was a beautiful attic space with skylights: 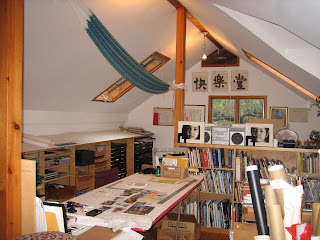 I took pictures of the work-in-progress to send the author to see, here's a sampling: 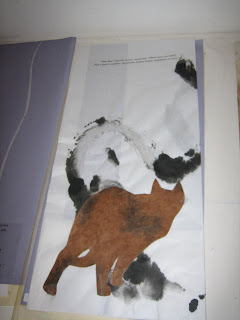 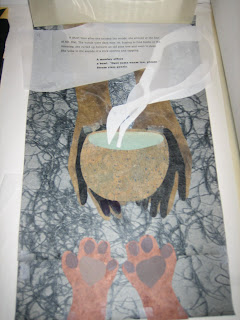 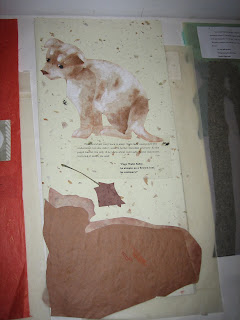 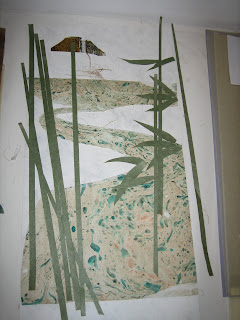 When Ed was finished with the art, he brought it into our office in person and we oohed and ahhed over it.
It was gorgeous, and we felt it perfectly represented the essence of wabi sabi in it's raw, simple way. 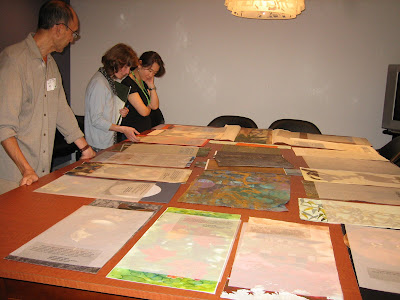 We eventually sent the art back to Ed to have him do a few minor corrections. Ed was scheduled to return the art by a certain day, but when that day came, the agent said that there had been a family emergency and we weren't sure when we'd be getting the art back. During all this time, Ed was going through some tumultuous times at home, and we were of course understanding that family came first.
But a week later, Ed checked in with his agent and was shocked that we hadn't received the art yet. He had thought he had sent it down to us the week before.
uh oh.
So...where was the art?
What had happened was this: Ed's agent lives in his same town, and when he's unable to personally deliver his art, he would leave the art packaged up and ready to go at his agent's front door. In this case, Ed had the art for two different books to deliver, and had told his agent that he'd be delivering them both on the same day, only when the time came, only one book was ready on that day, and Wabi Sabi ended up being left at the front door a day later. As Ed was dealing with the aforementioned family emergency, he didn't call to confirm as he normally would, but assumed the agent would know if was there when only one book had been delivered the day before.
He was wrong.
When he was finally able to emerge from the emergency a week later, he found that everyone was wondering where the art was. He immediately called his agent, who checked the front door--no art. They checked with the neighbors to no avail.
At this point, Ed called to break the news to me. I was shocked, to be sure, but there wasn't anything to do. Ed thought that the art would turn up eventually, so all I could do was keep my fingers crossed and check eBay now and then to see if someone was trying to sell the art. Ed asked me if I would let Mark know, because he couldn't bear to break the news to him, so I did. Like me, Mark was shocked, but he took it in stride--what else could we do?
In the meantime, the police became involved, and the only record of what the art looked like was those pictures I had taken, so I forwarded those on. Ed's local paper also did a story on the missing art, and printed some of those photos as well.
Ed told me that if the art wasn't found, he would do the art over again. He said, "I can only promise you that it will be even better than the last round." That sounded good to me.
Months passed and the art hadn't surfaced, and so Ed decided to start again. He used those photographs I had taken as a jumping off point, but also took this opportunity for a second chance to correct some of the things he hadn't quite been happy about the first time around.
Before we knew it we were back on track.
There were some in-house changes that occurred during this time, and Gail was now focusing on designing novels, so Art Director Patti Ann Harris became involved in the process, and Saho Fujii was assigned as designer.
While Ed had worked on the art, Patti Ann, Saho, and I worked with production on the specs for the book. Most important was the type of paper to use--we thought that the subject matter and the collage illustrations would be best highlighted on uncoated paper, although because uncoated paper absorbs the paint more than coated, it would be difficult to get the same sharpness of detail and brightness of color that you can achieve with coated stock.
And finally, the art was done. Ed had thought it would take him 3 months, but it took him about half that time. He used the opportunity of doing the art over to change the style of art--this time, he used more material that he deemed wabi sabi. Here are a few of the spreads side by side, new and old: 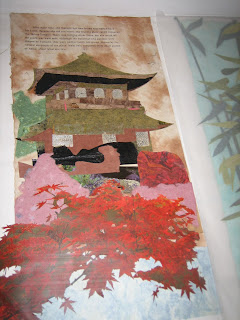 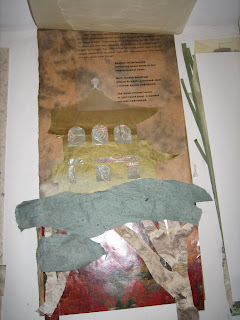 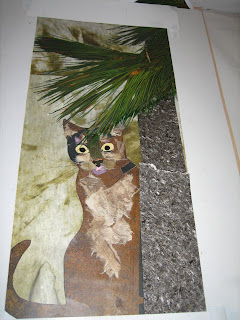 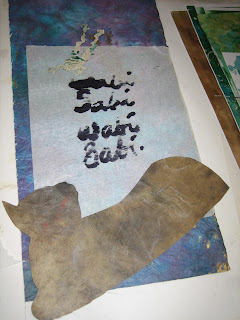 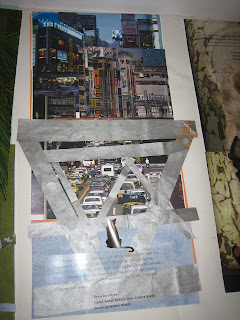 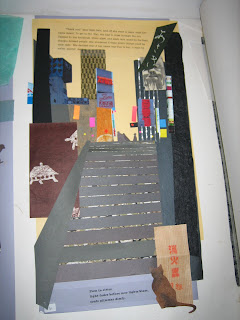 new city scene, original city scene
We all agreed that the new art was, indeed, better than the last round--it was as if he had used the last round as a jumping off point to take the art to a new level. It was richer, deeper, more vibrant.
The art was in the production process--we finally sorted out the paper issue and although it was a struggle, we finally achieved the level of reproduction we wanted.
It was around this time we received a call.
The original art had been found!!!
One day, a woman showed up at the front door with the art. Ed asked her where she had gotten it, and she said it had been found in a local church. "Funny," Ed said, "I teach tai chi there every week." There was a flurry of confusion as to what had happened. Had Ed perhaps left the art at the church by mistake? He told me that he wouldn't have put it past himself, but his daughter had been with him when he dropped off the art at his agent's house, and she specifically remembered asking him what it was, and he had replied, "The art for Wabi Sabi."
The package had been opened, but everything inside was intact.
My best guess as to what happened was that someone had taken that art, opened it and wasn't sure what to do with it. Perhaps he or she saw the article about it in the paper, and decided to leave it at the church as a safe haven. Who knows whether or not he or she knew that Ed had a connection to the church.
"How does it look?" I asked, a bit nervously. Ed laughed, because he knew what I was getting at. "The new art is better," he assured me.
So, we had two complete sets of the art--what an odd situation to be in!
We decided to use the circumstances to our advantage. We showed both versions of the art at our Library Preview meeting, and also at ALA. We're currently producing a video about the book that highlights the situation and the two sets of art. Ed is using both sets in his talks and school visits.
So you see, this whole experience was very wabi sabi--we took what was unexpected, what was basically a disaster, but made it into something beautiful.
And so, the publication story has pretty much come to an end--but wait, there's more! There's one more chapter of this story, an epilogue of sorts, that I'd like to share. I'll write about next week, so stay tuned!
Edited to add: jump to Part 4! The final chapter...
Posted by alvinaling at 4:48 PM

That's quite a story!!! I love Ed Young's picture book art. My friend Pat, a former children's librarian who now owns a children's book shop, raved about this book. She showed me the F&G of it that she had a couple of months ago. I knew I'd have to get myself a copy!

I'm glad everything turned out well in the end.

Wow- my heart was racing throughout the Raiders of the Lost Art story-- that sounds like my worst nightmare! I only hope I could show the same grace under the circumstances as Ed Young!

Thanks for sharing the details!

that sounds like my worst nightmare! I only hope I could show the same grace under the circumstances as Ed Young!


Definitely an illustrators worst nighmare and I only hope my PUBLISHER would grant the same deadline under the circumstances, haha, but I doubt it:)

Just writing to say how much I'm loving this harrowing and inspiring story. Can't wait for the last installment.

And I can't wait to get my hands on the book! I'm hoping to read it to my son's second-grade class.

The in-progress photos are breathtaking, and seeing the after and before pictures side by side is amazing.

The story of the lost art is completely heartbreaking. The art itself is just brilliant.