Read Parts 1, 2, and 3.
I last left off when the lost art for Wabi Sabi was found. The book printed beautifully, and it's now out in stores and has received two starred reviews so far, including one from Kirkus:

Our marketing department decided to make a short (3-5 minutes or so) video for the book to be distributed to some key accounts and also be posted on our website. We wanted to include the story of the lost art in the video, and as both versions of the art were at my office, I was to bring the art up to Ed's studio for the filming.
My assistant Connie carefully packaged up all the art so it would be manageable for me to carry by myself on the Metro North train. The film guy was due to arrive at Ed's studio at 3 pm, so I got on the train that arrived around 2:30. I had a rushed morning and no time for lunch, so I picked something up at Grand Central. The train was fairly empty at that time of day, and I had a row of seats to myself, but as I was about to eat some messy pasta, I thought it best to put the art on the overhead luggage rack to keep it safe and clean.
It was an uneventful trip, and I arrived at Ed's town right on schedule, gathered up all my stuff, and went out to find Ed who was picking me up. I saw him on the other end of the platform with his car and waved gaily at him. He waved back but had a bit of a perturbed look on his face. He put his hand out in a "what happened?" gesture, and all of a sudden, I knew.
I had left the art on the train.
I HAD LEFT THE ART ON THE TRAIN THAT HAD ALREADY PULLED OUT OF THE STATION.
ohmygodohmygodohmygodohmygodohmygodohmygodohmygod
"You left the art on the train?" Ed asked, with just a flash of irritation. Luckily for me, Ed is so Zen and understanding, and considering that he had been the one to lose the art in the first place, was even more understanding. Although, one might say this should have made him be less understanding--after all that the art had been through, how could I have been so careless?
"We'll get it back," he said. "It happens."
My mind was racing, trying to figure out what to do. I called information to get the MTA lost and found number. They informed me that they couldn't call the train because of federal regulations, but that when the train reached the end of the line, anything remaining on the train would be taken off, and would eventually be sent back down to the lost and found office in Grand Central. But I couldn't wait that long--we had a taping in 30 minutes! They said I could try the MTA police. I called Connie and she got on the case. In the meantime, I decided to get on the next train up (about 20 minutes later) and follow the art to the last stop, which luckily wasn't too far--about a half hour away.
Connie called and said that she spoke to the MTA police and that they were calling someone to check the train, and would call back to let her know the station where the package would be held. In the meantime, I also enlisted the help of the train ticket taker. When he took my ticket, I asked him if he was able to call other trains. He paused. "Why? What happened?" He asked. I explained my story. I told him that the MTA police was on the case. He shook his head. "They're not going to do anything," he said, "Let me see what I can do. I'll make some calls." He asked me some specific questions--which train, which car was I sitting in, what did the package look like, etc. I saw him making calls, but he had no news. Then he told me that at the very least, he now knew where the train was parked, and he would go on the train himself to look for the package when we arrived at the final station.
One stop away, he came up to me. "Someone will be waiting for us at the end of the platform," he said. "They have the package."
"THANK YOU SO MUCH!!!!" I was so relieved and happy and grateful. I looked at him and blurted out, "Do you have any kids?"
His face lit up. "Two boys! Ages 2 and 5!"
"Perfect!" I said, "Give me your address. I'm going to send you a box of books for them."
"No, don't worry about it, I'm just doing my job."
But I felt that he had gone above and beyond. And it was the least I could do.
I got the package, called Ed, and hopped on the next train heading back. It turned out that the filmmaker had gotten lost and had arrived after 3:30. The train would get me back around 4. We were only an hour off schedule. The filmmaker, Ed, and I all had a good laugh about it. Of course, it was easy to laugh now that the art was safe and sound again.
The taping went quite well--here are a few pictures I took: 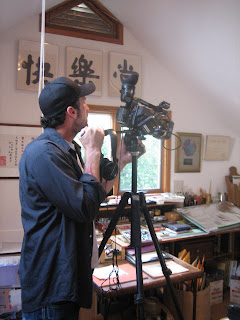 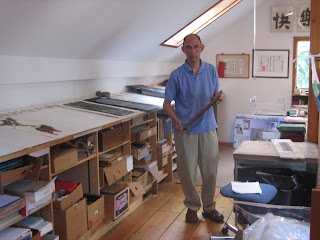 (Ed holding a wabi sabi material that he used in the art)
Half of the art stayed safely with Ed, and half of the art returned safely with me to the office for scanning. I kept it on my lap the whole ride back.
This video is still being edited--I saw a rough cut of it last week and it looks really great so far (Mark Reibstein was also interviewed in a separate taping out in California). I'll share it with all of you as soon as it's ready.
And that is the final chapter of my Wabi Sabi story. So far.
Oh, the stories that art could tell...
Posted by alvinaling at 8:01 AM

I love how Wabi Sabi the circumstances around the book even are! Just humbling real-life crazy little imperfect moments. Thanks for posting all of the saga!

Even though I had already heard this story, it was really fun to read it with pictures.

And I have a question: what books did you send the conductor who saved the day?

Umm--I don't remember. CHOWDER was one of them, and a novelty book about Pirates, maybe SERGIO MAKES A SPLASH and TICKLE THE DUCK, too? I received a thank you note back that specifically called out CHOWDER and the pirate book. Which reminds me, now that WABI SABI is out, I have to send them a copy.

This poor art, it has been through the wringer in it's short time here on earth.
If the art could only speak it could probably write it's own PB:)

Okay. My heart was thumping on this last installment of this story--especially since I hadn't heard any of it before. That is so something that I might do.

I was feeling it.

Alvina, that's a crazy story! And a beautiful backbone for the formation of a Wabi Sabi book. The art that kept slipping out of your hands....
I'll bet you had a HEART ATTACK when you realized you'd left the art on the train. ohmygodohmygod.
But I love it that the conductor was the one who helped. AND that you sent him a box of books! So cool.

I'm just so relieved your story had a happy ending !!!!!