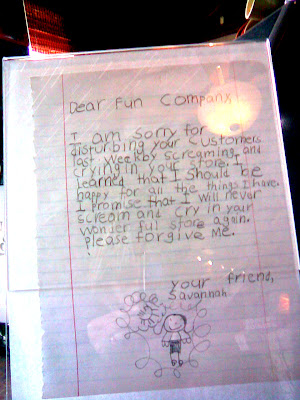 This really happened. I wasn't there, and neither was the woman running the store the day I was there and took this photograph:
"But I heard about it," she said. Her tone implied that it had been quite a scene.

We'll never know the rest of the story -- did one of Savannah's parents make her write that apology? Did she do it on her own? What made her have the melt-down? How old was she? (And maybe some of you know the asnwer to this one: is it usual for children old enough to write letters to scream and cry in public?) But, maybe part of the fun of being a writer is that you don't need to know the answers; you just need to be interested enough to ask the questions.
Posted by Libby Koponen at 1:06 PM

Omg that letter is adorable! My guess is the parents spearheaded that apology, but I hope I'm wrong.

Love the letter and even if the parents did spearhead the apology, I bet Savannah learned a thing or two from sitting down and writing it out.

At least I hope so.

Good for those parents! What a sweet letter and what a great lesson Savannah's parents are teaching her. Certainly no one likes appologize in public but even adults need to from time to time. In fact, I have been in store lines where the people ahead of me and behind are "humphing" and "sighing" and, in general, being a pain in the.... as they "complain" that THEY are being made to wait their turn. Honestly, adults with that sort of selfish attitude are, to me, far worse then any small child throwing a tantrum. I guess these sorts of people were once children that were NOT made aware of their bad behaviour in public and held accountable for it.
Wish there were more parents like this lucky little girl has!

Great letter! I bet she could be 7 or 8 and still having a fit, some kids do. And if a kid is on the older end, then they are definitely old enough to be held accountable, even if it's the parents nudging them towards it!

Thanks, everyone. That's interesting about seven or eight year olds still having fits.

I think the parents probably nudged her into it, too, and I too wish more parents held their kids accountable -- and came up with such constructive solutions, too.

Anyway, thanks for reading and commenting.

Ha! Love this--what a fun start to my day. Glad I wasn't there to see the scene, but how fun to read the aftermath.

And I'd bet the house (since we don't have a farm) that the parents made her write this, and good for them! It's still pretty sweet. Love her drawing!