Over eight years ago, a lady caught the eye of the director of the Westport Public Library.
"May I help you?" she asked the woman who was staring intently at one of the patron donation tiles on the wall.
"Oh, it's just that I so wished that we had been the one to sponsor this Rabbit Hill tile," she said, pointing to the decorative tile honoring Robert Lawson, "Because we live at Rabbit Hill, Robert's Lawson's old home and studio, now." 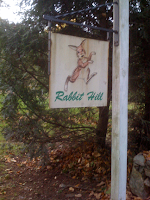 "Oh," the director said, "Well, maybe we can think of something else."

And that something else was the Rabbit Hill Festival of Literature which is one of the best children's literature festivals I have ever been to. It was definitely an honor to be a part of it-- I was on the impressive (but intimidating) roster of:

Mo Willems, EB Lewis, David Wiesner, Steve Jenkins, Nick Clark (Founding Director of the Eric Carle Museum) and Barbara McClintock. Let's count the Caldecotts, shall we? I think there's about 7 in there, add a Geisel, mix it up with some NY Times Best Illustrated...it is pretty amazing for me to be in the same sentence with them, let alone in the same picture.

But everyone was so friendly and nice that I quickly got over my intimidation and actually had a great time. And I got through my speeches, even a brand-new speech I wrote up just for the occasion (all about the inspirations behind my stories and art style). Yes, like a cat with a million lives, I survived public speaking yet again!

Grace--I'm so excited that you are spreading the word about Rabbit Hill and had such a great time. Just one small (but big!) clarification. The woman who funds the festival is not elderly!

I'm so glad I went to the Rabbit Hill Festival with you. It was truly one of the best children's literature festivals that I have ever attended--and I go to a lot!

Your presentation was wonderful! And you're every bit as talented as the other illustrators who were featured at the festival.

oops! I edited the blog post, sorry about the "elderly." I guess I just visualized her that way in my mind. That's what happens when one tells an illustrator a story....

Thanks, Elaine! I'm so glad you came!

Wow! What a wonderful event. And what an honor it must have been for you Grace. It sounds like you fit it just fine. I would have loved to have gone. Maybe next year...

Hi Grace-- It was so nice to see your presentation at the festival. It really was an amazing group of talent, and I thought you fit in just fine! :-)

Gail--If you get the chance, go! It was really one of the best Children's Lit. festivals I have attended. I think next year's panel will be novelists, so it should be really fun.

Jennifer--Oh, I wish you had introduced yourself! It would have been lovely to meet you in person. Thanks for the kind words!