More than fifteen years ago, I took a leave of absence from my teaching job. I had been invited to travel to China with a Children’s Literature and Language Arts Delegation in the fall of 1994. We were also having major renovations done on our house—so I thought it best to take a year off from work.
During my leave of absence, I decided to write a collection of fairy tale poems. I used to do an extensive unit in my second grade classroom on traditional literature. My students learned about all different kinds of tales—including cumulative, pourquoi, and noodlehead tales. My students compared and contrasted different versions of old tales. They wrote funny letters from one fairy tale character to another. They wrote fairy tale poems. They designed wanted and lost posters for fairy tale characters and objects. I had so much fun teaching that unit. My students enjoyed all the stories and activities too. All of that inspired me to write my own collection of poems about characters from traditional literature that are well-known to children.
Here’s one of the poems from that collection. I wrote it in the form of a classified ad. 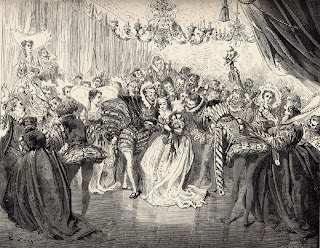 FAIRY FOR HIRE
By Elaine Magliaro

Did you get an invitation
To the prince’s ball in May?
Would you like a brand new pumpkin coach
To ride in on that day?

Do you want a silk brocaded gown
To spend the gala day in?
A shiny pair of crystals shoes
To waltz the night away in?

Just call me any day or night
At MAGIC WAND SUPPLIERS.
I’ll conjure up the lovely things
Your little heart desires.

At Wild Rose Reader, I have another original fairy tale poem about Jack and the Beanstalk.

Jama has the Poetry Friday Roundup at Alphabet Soup this week.

Posted by Elaine Magliaro at 12:43 PM

Hi Elaine! I completely agree with you about using poetry for teaching kids--did you read my post about my Thanksgiving with my niece:

Fairy tale poems is a good idea for a future project!

Ooh! I'd love to hear more about that trip to China!