from the BRG archives: this or the 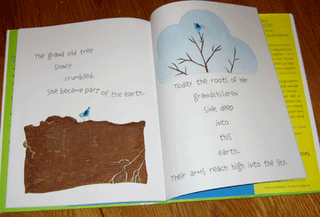 In my current work, I’ve driven myself mad trying to make the colors brighter at the end of the book (when the girl is happy) than those at the beginning (when the girl is sad)--even though she is wearing the same red coat. It becomes an insane process as I struggle with whether to use jewel red or crimson…and probably when the book is printed, the color difference won’t even be noticeable.

But it’s these little things that we, as creators, can’t let go of. Mary Newell Depalma, when writing A Grand Old Tree, told me a story of how she got into an argument with her editor over a “this” or “the.”

“…the roots of her grandchildren sink deep into the earth,” her editor had marked.
“…sink into this earth,” she had marked back.
“THE earth,” he had replied.
“No, THIS earth,” she insisted.
“I can’t believe you’re being so difficult,” he said.

And I suppose we are a difficult bunch. Exacting, demanding and a bit crazy-- but the ones who really feel the brunt of this is ourselves. While we toil and labor at the subtle nuances, do others, in the end, even notice the difference between a “this” vs. a “the” or a jewel red vs. a crimson? Probably not.

And nor should they. Because that is what makes what we do so beautiful.

Email ThisBlogThis!Share to TwitterShare to FacebookShare to Pinterest
Labels: from the BRG archive, Grace Lin

This is a great post. I get in silly battles like this all the time... or ARE they silly?

"This earth" and "the earth" do not mean the same thing at all.