Yes, it was a good ALA:
But let me back up. Midwinter was held in beautiful San Diego this year. ALA Midwinter is generally quieter than other conferences--we don't usually bring authors to the conference, because many librarians are busy meeting with their committees to decide the Youth Media Awards. No authors means no "author care" for editors. So, what do editors do at Midwinter? We work at the booth, we meet with agents, we walk the floor and check out our competition, and we sit in on open committee meetings. I sat in on a few sessions of the Best Fiction for Young Adults (BFYA--formerly known as BBYA--Best Books for Young Adults. They changed the committee to only consider fiction, as the list was unwieldy when it included nonfiction. There is a separate YA nonfiction award and list now), and a bit of the Notables committee meeting, too. It's fascinating to hear the members talk about the books, and I especially love it when they get really passionate or emotional about the books. Although, it can also be nerve-wracking when they talk about books that I've edited!

This year, since I was already in Southern California for the holidays, I arrived in San Diego early to help a little with setup:
The food eating and tower of ARC building continued throughout the show:


But it wasn't all food and building. We also hosted a preview breakfast bright and early Saturday morning (7:30 am!) where we highlighted around 25 of our upcoming titles for 2011. This is what the room looked like: 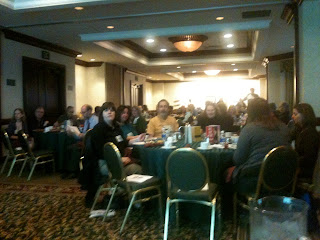 Our special guest star was debut author Holly Goldberg Sloan. Her YA novel I'll Be There is due out this May. Holly was so lovely and funny and her publishing story was captivating. 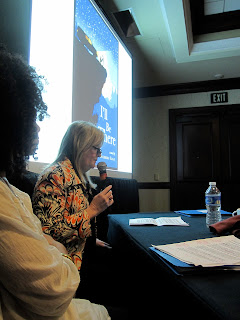 And now, on to the awards. ALA Midwinter is always buzzing all weekend with people speculating on and trying to predict the winners of the Caldecott, Newbery, Printz, and more. To be perfectly honest, aside from having fairly high hopes for a Geisel medal of some color for Grace's Ling & Ting, we weren't expecting anything else this year. Not that we ever expect awards, but we've had a little more buzz going into a conference in prior years. (Well, make that last year, and no other year before that....)

A few weeks prior, the Morris finalists (for debut YA) had been announced, so we knew going in that we would have at least one medal for Karen Healey's Guardian of the Dead (yay Karen!).

We found out Sunday morning that we had won the Printz Medal for Ship Breaker. Amazing. Well, I didn't find out till a little later, but suspected when our library marketing director Victoria Stapleton and the editor of Ship Breaker, Editorial Director Jennifer Hunt ran out of the booth together...

We heard about Grace's silver Geisel honor later that afternoon evening. Happy, good news. Of course, we were not to reveal any of this news before the press conference on Monday, so we had to keep poker faces at the booth and not look too happy. But it was a good day, and my colleagues and I celebrated with champagne and Karaoke later that night (speaking of poker faces, I sang Lady Gaga's "Bad Romance" up on a stage. Thankfully, there is no video or photo evidence, to my knowledge.)

On Monday morning, as per tradition, we were to gather in Victoria's hotel room at 6:30 am to see if we were getting any additional calls. At 6 am, as I was getting ready, I received a call from Victoria.

"You should sit down" she said. For some reason, I thought this meant there was bad news of some sort, although what kind of bad news she could share with me at that day and hour is beyond me.

"Dave the Potter has just won the Caldecott Honor," she tells me.

I'm not 100% sure, but I think the first words out of my mouth were "Holy f*ck" which is saying a lot because I really hardly ever curse. But I think that wrapped up what I was feeling at that moment. For whatever reason, that possibility hadn't been on my radar, not because I didn't think Bryan Collier's absolutely breathtaking art wasn't deserving, but because there had been very little buzz on the book. But...wow.

"Get here as soon as you can!" she said. I hurried to get ready, and while I was in the elevator, she called again. "Dave the Potter has also won the Coretta Scott King Medal for illustration," she informed me. I wasn't alone in the elevator, and in the off chance the woman was a librarian or in publishing, I couldn't give anything away. "That's very interesting. I'm in the elevator. I'll be there in a minute." and then I went to the hotel room and proceeded to jump up and down in glee.

We also found out that Ninth Ward by Jewell Parker Rhodes had won a Coretta Scott King honor for text. Woo-hoo! Room service delivered bagels, pastries, coffee, juice, and champagne, and we toasted our wonderful books with mimosas. 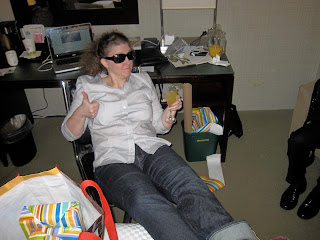 And then it was on to the press conference for the announcements of the awards. We actually got lost trying to find the ballroom in the conference center and missed the very beginning, but we soon settled in. One of the first awards announced was the Stonewall Children's and Young Adult Literature Award. And SURPRISE! Freaks and Revelations by Davida Wills Hurwin won an Honor! The committee hadn't informed us in advance. And, as I found out later when I called Davida, they hadn't called her, either. I was double surprised because the book was published in 2009--but it had published in November, so was eligible. I love this special book so much--read more in my Beyond the Book post. It hasn't seemed to find its audience, so I hope this award will bring a new readership to this powerful book.

Our other winners, adorned with their fancy medals: 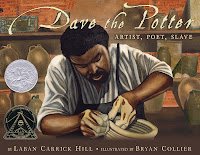 For a complete list of the winners, go here.

To be honest, I'm still in shock. After the amazing conference we had last year, this feels a little bit...greedy, somehow. I also can't believe that I've almost achieved my pie-in-the sky goal for 2011 that I posted two weeks ago:


-Win an award for books I've edited in every category: picture book, early reader, MG, and YA

With Dave the Potter, Ling & Ting, Freaks and Revelations, and Guardian of the Dead all winning honors, I "only" have a MG award left to attain. That doesn't seem as daunting a goal as when I first stated it! I can't help but wonder if this is a case of me throwing a wish out into the universe and having it answered.

I do want to say that these awards really are a crap shoot, or, as another editor said, winning is like winning the lottery--who knows what each committee is going to think about any book. There are so many deserving and wonderful books out there, and authors and illustrators who weren't honored last Monday shouldn't feel disappointed. As one author on Facebook said, "we're in good company!" So true. But for those books that do win, it's wonderful when the hard work of the authors, illustrators, editors, designers, production people, copyeditors, proofreaders, marketers, publicists, etc. etc. is rewarded.

And of course winning is happy and giddy--all in all, not a bad start to the year!


*As Freaks and Revelations was published in 2009, we did not have a copy in the booth to display
Posted by alvinaling at 8:30 AM

I now reinstate my ban of any photos. ever.

Amazing year of books for you guys! =D Congratulations!

I too hope that Freaks and Revelations finds an audience. It is a haunting story.

It was quite an ALA....congratulations to you and to Grace.

I also think it's amazing and great that just after throwing out that casual, almost joking, goal, you've already achieved it!

And I like your reflections on what awards mean.