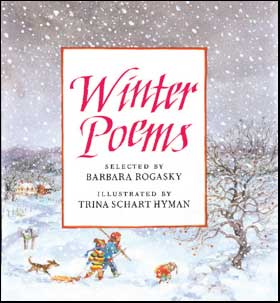 Last Friday, in A Gift of Poetry, I wrote about A CHILD’S CALENDAR, a book of children’s poems written by John Updike and beautifully illustrated by the late Trina Schart Hyman. I believe her illustrations in the 1999 edition breathed new life into that book of poems, which was first published more than forty years ago. After writing that post, I thought about Hyman’s picture book art and her contributions to children’s literature. What a legacy she left behind. What a great loss to the world of children’s literature when she passed away in 2004.

Today, I have decided to write a review of WINTER POEMS, another poetry book Hyman illustrated. WINTER POEMS is an anthology compiled by Hyman’s best friend and housemate, Barbara Rogasky. It is a poetry book for people of all ages. It would be just as fitting a gift for an adult as it would be for a child. The anthology contains twenty-five works—many penned by great writers of both adult and children’s poetry: Shakespeare, Wallace Stevens, Emily Dickinson, Robert Frost, Thomas Hardy, William Wordsworth, Carl Sandburg, Elizabeth Coatsworth, and Lilian Moore. You will not find most of the poems included in this book in any other anthology for children.

In a note to readers, Rogasky explains why she and Trina Hyman made the book. First, Rogasky tells of her love of winter: “In the country, where I live, all the seasons are beautiful. But winter is the best. A hard walk with a breath a frosty cloud is much more refreshing than a sweaty walk in the hot sun. The color and light over the snow’s whiteness are ever-changing and glorious.” (And Hyman’s illustrations, done in acrylics, definitely capture both the glory and the chill of this season.) Next, she writes about her love of poetry: “A poem is a kind of miracle of words. It can tell a story, flash scenes to the mind’s eye, and use many fewer words than any other kind of writing.” She speaks, too, of the music and rhythm inherent in the genre. Rogasky provides a third reason for this anthology: She and Hyman could not recall a collection of winter poetry that did not include poems about Christmas or Hanukkah or New Year’s Eve. They wanted to produce a “nonsectarian book for people with different religious calendars.”

WINTER POEMS is a true collaboration between the anthologist and the artist. In the book, Rogasky takes us through the coldest season of the year with poems about such things as the steady winter rains in Oregon; a howling snowstorm; a child explaining his knack for skiing; the moon, the stars, and other lights that “punctuate” the winter dark; and poetry about animals—birds, a cat, and Edna St. Vincent Millay’s A Buck in the Snow. She begins the anthology with Rachel Field's Something Told the Wild Geese and ends it with an excerpt from Carl Sandburg's Blossom Themes. Hyman, for her part, brings us into the soul of winter with her evocative paintings of falling snow; of someone shoveling out a path after a big storm has left the yard, the car, the rooftops of the house and barn pillowed with snow; of two people (Rogasky and Hyman) walking “in velvet shoes” under a canopy of leafless trees in a town stilled by downy whiteness; of skaters gliding across an icy pond as the last remnant of pink sky hovers above dark hills at twilight.

The illustrations in WINTER POEMS were definitely a personal and intimate artistic creation of Hyman’s. They were “based on real things.” The house pictured in the book is the one in which Hyman and Rogasky lived. The dogs, the cat, the sheep were all their animals. The young boy is Hyman’s grandson, Michou; the young mother is her daughter, Katrin; and the man is Katrin’s husband, Eugene.

As in A CHILD’S CALENDAR, Hyman’s illustrations in this book do not overwhelm the text—rather they draw the reader into the heart of the poems, into the colors and cold beauty of this season, into the mountainous countryside of New Hampshire where the artist and anthologist lived—a place where nature herself writes poetry across the landscape with a white and wintry hand.

WINTER POEMS is a special book. It is a perfect marriage of fine poetry and fine art. Although the book is no longer available in hardcover, there is a paperback edition that is still in print.

For information about the life and art
of Trina Schart Hyman visit her page
at Children’s Book Illustrators,
a website developed by Denise Ortakales.

Never read it. Sounds great. Off to request it from the library. Thanks for the review!

This is a gem I found in the Scholastic catalogue a few years ago. My youngest is busily memorizing Marchette Chute's "Skiing" from it.

I had always liked "Velvet Shoes", but reading Rogasky's explanation of the illustrations made it a completely different poem for me...

I've had a copy of WINTER POEMS for years--but I didn't pay much attention to Rogasky's "About this Book" until I started writing the review. You're right. I think her explanation at the beginning of the anthology changed the way I looked at both the poetry and the art. One of my nieces lived in that same town in New Hampshire for a couple of years.

I always liked "Velvet Shoes". It's a poem not found in anthologies any more.

I hope you like the book. I have Rozenberg's LIGHT-GATHERING POEMS-but not the other one you mentioned in your Poetry Friday post. I love her book THE INVISIBLE LADDER. It includes short statements by the poets whose works are included in the anthology. Have you read that book?