Up here in Massachusetts, we haven’t had much in the way of winter weather this winter…that is, until recently. As I begin writing this Poetry Friday post on Wednesday morning, the ground outside my house is covered with a thin layer of snow and the meteorologists are predicting that temperatures will dip down into the “teens” by Friday. So…I have decided to go with the present winter weather flow and give you some seasonal poetry written by Dorothy Aldis (1896-1966).

When I first started teaching—almost forty years ago—it seemed as if poems written by Aldis were included in nearly every general children’s poetry anthology that was available in my school library. Her poems still show up occasionally in anthologies today. One of David McCord’s favorite Aldis poems, Little, is included in Elise Paschen’s POETRY SPEAKS TO CHILDREN, which was published in 2005. (I just picked this book up the other day. It includes a CD with poems read by some of the poets.) 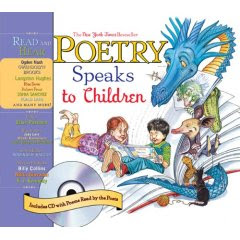 The following poems—Winter, Ice, and Snow—can be found in EVERYTHING AND ANYTHING, which was published by Minton, Balch & Company in 1927. Ice and Snow—renamed On a Snowy Day and with a few changes in wording—can also be found in THE SECRET PLACE AND OTHER POEMS—published by Scholastic Book Services about four decades later.

The Street cars are
Like frosted cakes—
All covered up
With cold snow flakes.

The horses’ hoofs
Scrunch on the street;
Their eyelashes
Are white with sleet.

And everywhere
The people go
With faces TICKLED
By the snow.

(How’s that for a little onomatopoeia?)

The fenceposts wear marshmallow hats
On a snowy day;
Bushes in their night gowns
Are kneeling down to pray—
And all the trees have silver skirts
And want to dance away.


ON A SNOWY DAY

Bushes in their nightgowns
Are kneeling down to pray.

And trees spread out their snowy skirts
Before they dance away.


Which version of the third poem do you prefer?

Posted by Elaine Magliaro at 7:33 AM

The perfect selection of poems to make this Floridian homesick for his northern roots (in NJ) this morning.

Which version do I prefer? The "snowy skirts" of the second version brought the image of the snow-covered tree to life for me... and heightened the picture of snow everywhere... while the "silver skirts" of the first poem seemed more appropriate to an ice storm.

Both poems, I think, create clear, crisp images... but the sound of "snowy" with its whispery "w" helped me feel the snow, whereas "silver" with its harder "v" let me feel the ice.

Mostly, I enjoyed reading both versions and seeing how a poet needs to feel her way into an image in order to make meaning of the world.

Thanks for a great start to the morning.

I'm not sure which I prefer. I do think the word silver has a colder feel to it than snowy. I prefer the beginning of the older poem with "On a snowy day" better than "On a winter's day"--but I like the idea of the trees spreading "out their snowy skirts."

I wonder if Aldis changed snowy to winter's because she changed silver to snowy in the newer version and didn't want to use the word snowy twice in the poem.

I have always enjoyed the image of fenceposts wearing "marshmallow hats." It was something I could discuss with my students to help them understand how poets use words to help readers make pictures in their minds.

I like the second version because she takes out "the" for the fenceposts and for the trees and makes them more like beings, less like objects.

Thank you Elaine! For years I have recited version one of Dorothy's poem -- my favorite memorized piece from elementary school (56 years ago).

I never knew the authors last name and have searched and searched for years until finding it here on your site! What a treat for me on this Michigan "snowy day".

The reference to fenceposts was always so special to me as growing up in old Detroit I noticed the rounded heads of the old-style posts when coated with snow and always thought of this poem when playing outdoors - searching for icicles to lick.

Now I will search out more of Dorothy's work and pass it along to my granddaughter, who at age 6 is just the right age to start learning some pretty pieces -- and her grandma's favorite: "Snow".