A new way of waiting

I was restlessly walking when I saw this in the bookstore window: 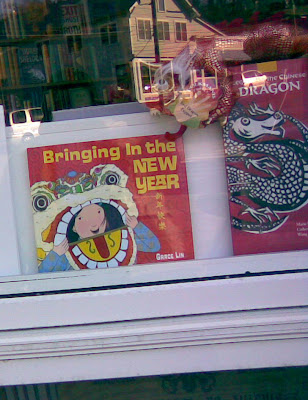 It was almost like seeing a friend – and getting a happy new year message. I’m always glad when one of the Blue Rose Girl’s books has a success, and being chosen out of all the picture books published for the window IS a success (though I wish they’d put The Year of the Rat, which I love as much as The Year of the Dog, there too). But still, it's one more sign that the year of the rat is going to be a happy new start for us all.

For me, 2008 began with sending out two books: a novel and a picture book. Finishing a novel is always odd: for me, anyway. This time, the first couple of weeks were really fun: I saw a lot of friends, went ski-ing, caught up with my life, made things (more on that next week), and gave myself the gift of idleness without feeling guilty, too. Then – I started checking email and my missed call list a lot.....and feeling restless and all the other things that go with waiting (I’m not going to enumerate them, because those who have felt them them know only too well and those who haven’t will just think they’re illogical and a waste of time and energy).

I’ll just say that for me it is the least fun part of being a writer – far worse than the finances etc. -- and I put an end to it by starting a new novel! I had sworn that I wouldn’t do this until I had sold something; but I woke up the next morning excited and thinking about what I was going to write, instead of wondering if today I would hear. I’ve taken myself off hold!

Posted by Libby Koponen at 9:26 AM

Hooray, Libby! I'm so glad you woke up excited about your new project.

Write when the inspiration comes. Inspiration is a cloud that blows in on the whim of the universe and can quickly blow away. :)

I just discovered this blog and I'll be ordering Blow Out the Moon ASAP. I'll also come back often.

And Alvina, HELLO! I miss you.

Thank you both. Those comments are encouraging and I will take them, too, as good signs.

Won't you tell us some about the novel and picture book you sent out so we can look for them.

(I watch for the BRGs too.)

Thanks, Katherine! I will. I'm glad you're interested: thanks for telling me.