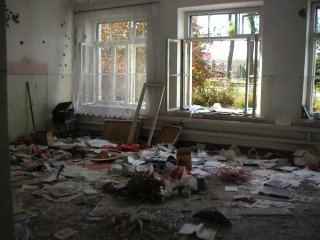 A year after the Chechnyan terrorists attacked the school in Beslan, Russia, some of the children who survived told what they remembered about being in that gymn; other children translated their accounts into English. I heard it on NPR and one boy said something I’ve thought about so often since then that I want to tell it here.

He described being in the gym (they were there for 3 days and lots of them died), and then he said that he kept hoping Harry Potter would come. I don’t remember his exact words – but I remember the scene I imagined: a gym with high windows, like ours when I was that age, all the kids scared, and then a boy flying through one of the windows, in a kind of Peter Pan cocky pose. To do this blog I found pictures of the school windows (these are from a classroom, not the gymn, but they show the light, and the view):
[picture should be HERE but they keep putting it above!]

I also looked up the boy’s the exact words:

“One looked at me, and stood there staring at me for 20 seconds. I got scared so I turned away. His eyes were like glass – so black, like glass.” Then he gave himself hope: “I was hoping that Harry Potter would come. I was thinking he had a cloak that made him invisible, and he would come and wrap me in it, and we’d be invisible and we’d escape.”

I struggle a lot in my non-fiction writing about how much to explain -- in fiction, I DON'T explain. Details show the stories and characters. But I feel like blog posts should have points (what do the rest of you think about that?)....so I'll explain why this story is interesting to me.

*I was haunted by the original event
*the boy's reaction fascinated me: I'm always interested in how kids survive and cope
*he chose Harry Potter -- a fictional character, and one from a book without an overt lesson or political message. That nine year old didn't think of "The Little Engine That Could" or some other didactic story. Some people seem to think fiction -- children's books, especially -- must contain didactic or politically correct messages to be worthwhile. I believe a good story; real, appealing characters; and good writing are enough. They may even be more helpful to kids! By the way I am not saying Harry Potter has or doesn't have all these elements (as it happens, I don't really like HP); but what I personally think of Harry Potter isn't the point here. The thought of him helped that boy.
Posted by Libby Koponen at 9:12 AM

You are right -- it is fascinating.

I find I am fascinated by a lot of how children perceive the world, even how I used to view things as a child.

What a wonderful story from what was/is truly one of the worst events ever.

Thank you both! And thank you, Kelly, for Big A Little A's link to a review of Blow Out the Moon. It was nice to be favorably compared to a Newbery winner!And I'm glad you both liked this story. I wondered if it was too heavy for a blog so the comments were especially welcome.--Libby

Libby, I liked it so much I put a link on my blog.

Last week I went to the Harry, Carrie, Garp event in New York, and there was a young-ish girl in front of me who I thought would break down in tears or hug her mother to death when Rowling came on stage. What a vivid contrast that young girl makes to the little boy of your post.