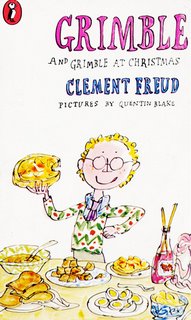 When we had our Brunch Until 5 pm (July archives for anyone who missed it), I mentioned the book Grimble and Alissa the author and illustrator had read it and loved it as much as I do.

It’s really exciting to find someone who loves a book YOU love that no one else you know has ever heard of, let alone read. I heard of Grimble in a JK Rowling interview -- it was one of her favorite books. Alissa and I kept trying to describe it to everyone else, and okay, this may not have been obvious at the time from the way I kept talking, but I did notice no one seemed too impressed. It’s a hard book to describe in a sound bite. We fell back on “the way it’s written,” which isn’t usually a great attention grabber or headline.

So I’m going to try to do it justice here. It begins:

“This is a story about a boy called Grimble who was about ten. You may think it is silly to say someone is about ten, but Grimble had rather odd parents who were very vague and seldom got anything right.”

One day he comes home from school (“the orderly part of his life”):
“…and shouted ‘I am home!’ and no one shouted anything in answer, so he went around the house looking for messages because his parents always left messages. It was the one thing they were really good at.”

They’ve gone to Peru, and left notes all over the place about what he should do while they’re gone.

This sounds horrible, but he manages….you’ll have to read the book to find out how. I’ll just say that – funny as it all is – the psychology is right on target: he reacts with a mixture of anxiety, practicality (child, not adult, logic and practicality), and insouciance…this mixture is part of the book’s charm for me. I’m interested in children who are survivors, especially that sort of survivor.

Also (and this also is perhaps part of the charm?) the parents aren’t that bad. Their messages are bizarre, but reassuring. They are more aware of Grimble as a person than you might think – e.g., he’s reading a cookbook they’ve left him –

“Having made the mayonnaise he dipped the hard boiled egg halves into it and ate them. As there were lots and lots of pages of the manual still to read he decided to look at the end of the book because usually, if you turn to the last page, you get the best part.
He turned to the last page and it said, ‘Grimble. Attention. Wipe your mouth. Go to bed.’ ”

To give you an idea of THE WRITING, I opened the book at random promising myself to quote the first sentence my eye hit. This is it:

“On Friday Grimble woke very early and went out to give the pigeons the last of the sandwiches from the oven; these were now very stale and tasted evil but pigeons not only have poor table manners, they are unfussy about what they eat.”

Sadly, this book is out of print. I have 2 copies, because I bought one online and gave up on its arrival – AFTER I ordered the second, the first one came, a tattered paperback from a bookstore in Australia. Alyssa, it’s waiting for you! And maybe JK Rowling’s interest means that someone will republish it. I hope so. It doesn’t meet my ultimate test of a good novel (while you’re reading it, you forget that you’re reading, you’re just THERE), I’m not sure WHAT I would have thought of it as a child, but I like Grimble the character, I like the writing, and the book makes me laugh out loud every time I read it. --Libby
Posted by Libby Koponen at 8:39 AM

That DOES sound like a good book--somewhat Roald Dahl-ish (but perhaps it's partially the Quentin Blake illustrations that are making me think that). If Alissa doesn't claim the book, I'd love to borrow it!