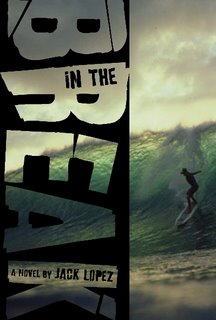 Our Fall list is starting to come out already, and I've been meaning to write about two of my summer books. I'll try to do one tonight, and one tomorrow.

The first is YA novel In the Break by Jack Lopez. VOYA calls it a "captivating novel by an author who is a surfer about surfing, adolescence, friendship, and loyalty." Kirkus says: "Lopez's debut shares much of the atmosphere and elements seen in urban fiction, and he nails the conversations between Juan, Jamie, Amber and their friends with a gritty, dead-on teen-speak that surges through the pages, giving extra shots of hang-ten adrenaline to the already fast-paced plot."

This is the publication story of In the Break:
Right after our move from Boston to NY in 2002, an agent I had never worked with before called me and asked if I’d be interested in reading a surfing novel. I said sure, send it in. Now, because Little, Brown was in the midst of our move from Boston to NY, our submissions piles were being sorely overlooked, as we struggled to keep all of our books on schedule despite being shorthanded and having about ¾ brand-new staff. So I had a reader review many of my manuscripts including In the Break (which was then titled Second Break), and the reader wrote up a reader’s report recommending that I give the novel a second look. So I placed it in my very large “to read” pile, and promptly forgot about it. A whole year (yes, a WHOLE YEAR!) after the manuscript was sent to me, I found the manuscript in a pile, and sheepishly called the agent. I told her that I still hadn’t read the novel, but another reader had read it and liked it, and I planned to read it right away if it was still available. Now, I don’t know why she never followed up on the manuscript—I won't name names, but she was mostly an adult editor, so maybe she wasn't as invested in this manuscript, or perhaps she too busy herself, but luckily for me it hadn’t sold in that long time. So I took it home to read, and althought I thought it needed some work, something about it really caught my fancy--the rawness of the writing reminded me of The Outsiders, one of my favorite books. And even though I've never surfed, the descriptions of the water and surfing were so beautiful and compelling. It had all of the drama that I loved reading about when I was a teen--violence, romance, tragedy. I wanted to publish it.

So I brought it to our editorial meeting and three other editors were interested in reading it--a good sign! They all had editorial concerns, many that were similar to mine, but all felt that it was a project worth pursuing--one compared it to the movie Y Tu Mama Tambien (which I still haven't seen!). We decided to bring the manuscript to our Publications Committee meeting with a revision letter accompanying it to show the committee the edits we felt needed to occur before publication.

Happily, the novel was accepted, and after a last-minute cover change when one the chains was unhappy with our original cover (long, frustrating story--but isn't the cover fantastic? The whole design is perfect, thanks to Designer Alison Impey. Props to Alison, and thanks for her patience...), it was just published this July. There are many things I love about this book, but one interesting thing to note is that the author, Jack Lopez, is Mexican American, and the narrator of the book, Juan, is as well. But although there are some cultural details throughout, his ethnicity does not play a large role in the book, and I'm happy that this hasn't been pigeonholed as simply a "multicultural book." In fact, the reviews so far, which have been great, have not even mentioned his ethnicity. While I think there is still need now for ethnic-identity driven books, particularly when there isn't already a lot out there--such as Nothing But the Truth (and a few white lies) for biracial teens--I hope there will be more and more books that feature main characters of color where their ethnicity is not the main subject of the book, and reviewers do not choose to direct the book towards a specific niche audience.

In the Break is an adventure novel with substance, and it should appeal to both boys and girls, teens and adults. It deserves a wide audience. And I just got happy news yesterday--it was chosen as a Book Sense pick. Yay!

Visit the author's website here.
Posted by alvinaling at 7:53 PM