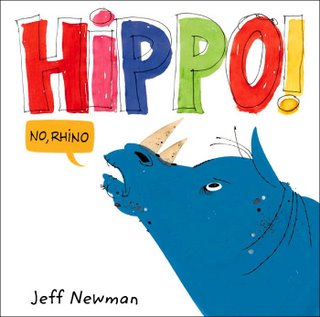 The second book I was planning to write about is Hippo! No, Rhino by Jeff Newman, which is, like, one of my favorite picture books EVER, and not just because I edited it.

Today is the Sixth Carnival of Children's Literature, this time hosted at Castle of the Immaculate, and through it I found this lovely review of Hippo! No, Rhino.

The publication story of this book is fairly straightforward--one of our designer's, Saho, had a friend whose boyfriend was an illustrator, and Saho asked me if I'd like to look at his book ideas, so I said yes. Hippo! No, Rhino was one of the ideas and I instantly fell in love with the project.
This almost-wordless book starts off with a clueless zookeeper named Randy mixing up the signs and putting a sign saying "Hippo" at Rhino's cage. Poor Rhino! His expression of dismay is priceless. Here's how the text goes after that:

You get the idea. The art is bright, vibrant, and retro, reminiscent of such classics as The Little House and Eric Carle (as suggested in the Publisher's Weekly review). To me, it's the perfect picture book. Fun and distinct art, it stands up to repeat readings (there are so many clever details in the art), and the illustrations and text are perfectly matched. Since the moment I saw this book, I felt it had the potential to become a classic.

Hippo! No, Rhino should be available at your local independent bookstore! (yes, that's a hint)

Have a great weekend, everyone!
Posted by alvinaling at 10:07 AM

I'm a lurker (Agy mentioned your site on our board, Yellapalooza). Your blog is a treat -- thanks for sharing thoughts/art/ideas/etc.

Wanted to write because I just saw Hippo! No, Rhino at Powell's in Portland, OR...gravitated to it instantly due to the gorgeous artwork, and was thrilled to find that the text was equally clever. I am buying it for my nephew's birthday.

BTW, both this book and Chowder were face out on the shelves there, so the booksellers must love them, too.

Hi Abbey--thanks for commenting, and welcome! And thanks for the nice words about HIPPO! NO, RHINO. It's funny with this book--sometimes the people I show it to laugh hysterically at it, ooh and ahh over it, and read it all the way through in front of me, and I can tell that they just "get" it. And then others look at it and say something like, "that's cute"--which isn't a bad reaction, necessarily, but not one of a kindred spirit!

Congrats on a lovely-looking book. Any chance of it being published over her in England? I remember when you have a book you edited out there in the world, and it feels a bit like it's your child (not that I've had one yet, but it seemed close). I'll keep an eye out, and if I don't see it here, will look for it when I visit California at xmas.