A couple weeks ago someone was asking about what kind of reference I use in my illustrations, so I thought I'd expand on that a little here. Usually my books have animal characters (Francine's Day, The Three Little Kittens, The Purple Ribbon). These required some amount of photo reference to get the anatomy believable... but the animals are pretty stylized, so reference was at a minimum.

Now that I am painting human characters though, its a whole different ball game! First of all, the story I am working on now is based on actual historical events... so things like clothing styles and architecture need to represent the time period they come from. This is not always an easy task! Last week I spent an entire afternoon trying to figure out what type of nightgown a child slave would have worn in the 1830's. Many slept naked, but I can't draw that (if everyone was up in arms over IN THE NIGHT KITCHEN, I can only imagine how that would go over).

At last I found a web site with patterns from the 19th century, and indeed they had a nightgown. But is that what a slave would have owned? I have about 20 books out from the library about slavery, many with pictures, but no one sleeping! At times, I read, slaves would be given worn out castoff clothing from the families they worked for, so I suppose that what I have will suffice. Sometimes its hard to know where to draw the line with accuracy- I want the illustrations to completely honor the story by being as accurate as possible, but if I spend weeks researching minute details I will never make my deadline!

Another very important use of reference material is for anatomical details. Hands and feet will always baffle me and take the most amount of time in a painting; they are so complex with so many small moving parts. Fortunately I have very cooperative roommates that let me borrow their hands when I am stuck with a painting. For instance:

When I was ready to tighten up a sketch and start painting, I took this picture of my roommate's hand: 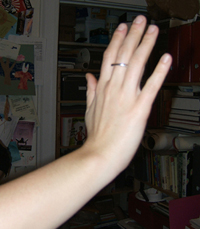 Since the character is black, I needed some reference for skin tone, so I found this picture on the internet (love you google): 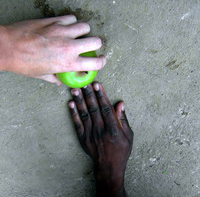 Using roughly the gesture from the photo I took, and the shades of color from the one I found, I painted this: 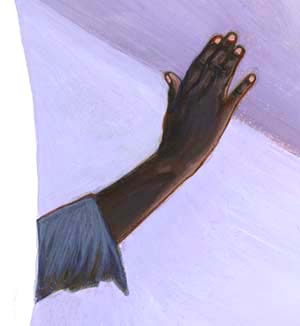 I don't always borrow quite so directly, sometimes I can approximate a gesture based on similar ones, or modeling myself (though its hard to draw your own hand without a photo). Just one more way that making a book is like a big puzzle, you try to weave together lots of little parts to create a whole that is its own.
Posted by Anna Alter at 10:01 AM

I only recently learned that artists use some sort of reference most of the time. Yes, I'm an adult! And as a wanna-be artist (not professionally), I found this encouraging.

Anna, how often would you say you draw right out of your head, without any visual reference at the time of creation? (Seeing the image every day your entire life doesn't count.)

How about the rest of you BRG artists?

And a question for the future: How do you go about shading objects in an illustration? Yeah, yeah, I'm sure there are volumes on this, but what are you thinking and doing to achieve this? Like the grass in your earlier example.

Hmm, I think most of the time I draw out of my head... this project is sort of a new leaf for me, but excepting really specific objects (like a piano or a car- mostly mechanical things), I usually sketch from memory.

More often I borrow color combinations from other sources- things I see in nature or master paintings (a blog for another day).

Hmm color choice is a hard thing to describe... mainly I am organizing the contrast around the image. So sharp contrast and bright colors are reserved for the places I want the viewer to pay attention to. I also choose colors that work off of eachother in different ways... the grass in the painting from a couple weeks ago has a lot of blue in it because the character is wearing blue, and I want the color choices to have unity...

Huh. So much for thinking I had something figured out!

I'm glad you draw out of your head most of the time. That's more awe-inspiring, and I like to be so inspired.

Do you have any favorite art (drawing/painting) how-to books for kids or raw beginners?

I use a ton of photo references all the time--for all of my books. For Show Dog I used a million dog books. I found placing all the dogs together in some scenes to be quite difficult. For Patty I also referenced to death. True, I do cartoons... but GOOD cartoons require a realistic base. For my following books I photo referenced even more. Non fiction always requires photo materials. It's a pain in the butt.

Ah, that was my question. Thanks for the post. I was struggling that day with a sketch. I used to do elaborate photo shoots, only because that's how I learned from others at the time. But, I noticed that my drawings would be stiff. So, on my last two books, and the current one, I've been weaning myself off of photos and going from memory. It seems to make for a much looser drawing, but also takes a bit more confidence on my part. For clothes, American Memory is great and I also find books by other illustrators.

I too use a ton of reference material. But Jen, reference can be anything from photos to real life objects, to watching how light hits something at different angles or times of day. I also look at a lot of other illustrators work, just to see how they "handle" something like lighting, etc.

I work in a fairly realistic style, so reference is a must. Like Anna said, Google is great! I also like children's clothing magazines and parent magazines. They show lots of different poses or positions. I always stop by the "used bookstore" inside our local library. It's a great place to find magazines.

Meghan, you're right about referencing to death. People would be surprised at all the things we need to think of! (Like Anna and the wardrobe.) I once had someone question a type of ocean fish in warm water vs. cold water. And this wasn't for non-fiction, it was a fantasy!

Once again, Anna, it's really great to see your process -- I went to art school but studied architecture for three years, so as far as illustration goes, I'm kind of self-taught. I love seeing how real illustrators develop their technique and style! Your work has a quiet beauty to it that sometimes reminds me of the work of Molly Bang.