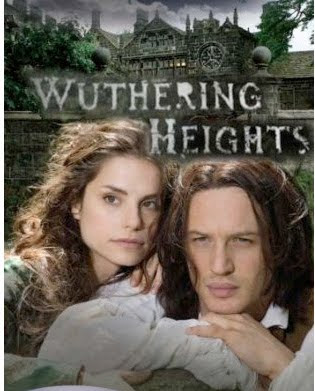 Inspired by the 2009 Masterpiece WUTHERING HEIGHTS (and if you haven't seen this, I can't recommend it strongly enough!), I re-read the book.

To me this time around, Cathy and Heathcliff sounded more like two intense siblings having a really bad fight than any adult lovers *I'VE* ever encountered. 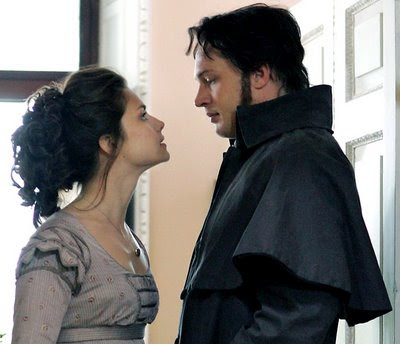 [Cathy talking to her husband, in the book] "....Heathcliff would as soon
lift a finger at you as the king would march his army against a colony of
mice. Cheer up! you sha'n't be hurt! Your type is not a lamb, it's a
sucking leveret.'

'I wish you joy of the milk-blooded coward, Cathy!' said her friend [Healthcliff]. 'I
compliment you on your taste. And that is the slavering, shivering thing
you preferred to me! I would not strike him with my fist, but I'd kick
him with my foot, and experience considerable satisfaction. Is he
weeping, or is he going to faint for fear?'

The fellow approached and gave the chair on which Linton rested a push.
He'd better have kept his distance.....

(Doesn't that sound like siblings fighting? YOUNG siblings?) But when I first read the book, that was how grown-ups in love talked and behaved, for all I knew.
Maybe one reason (aside from Tom Hardy -- not just good-looking, but really SMART and a great actor!) this version is so satisfying is that although the book is great, it's flawed. The characters are real, they're intense, they've become deservedly immortal -- but there are gaps in their story. These are brilliantly filled in by writer Peter Bowker in this TV version (one of the scenes he added was practically the best -- and so well-written that I was really surprised that it wasn't in the book), and equally brilliantly acted by everyone in the cast. 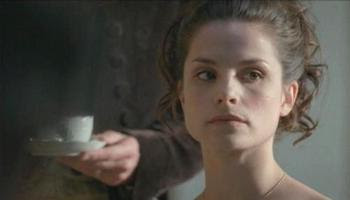 It probably takes people with more experience of adult romantic relationships than Emily Bronte had to tell Cathy and Heathcliff's story as adults would experience it. This version did that -- AND kept Emily Bronte's language word for word in many places.
It even makes the story of Hareton 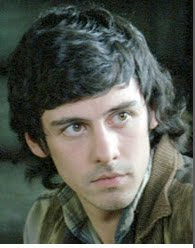 and young Catherine interesting. When I was young and read the book, I always thought it should have ended when Cathy died; but seeing this and then reading the book again, as an adult, made me realize that no, we need to see what happens to Heathcliff --and how things turn out for the next generation, too. Only then can the story be resolved.

The point of this post, though, is to say a book can be really, really flawed and still be great. Alive, believable characters who transcend their author's mistakes; a gripping story and setting; great writing; and, maybe, inspiration and something to say that satisfies a need in readers all count for more than technical perfection.

I'm trying to think of another great books with huge flaws - THE SECRET GARDEN, maybe? The way it kind of switches from being the story of Mary to the story of Colin? But maybe I'm just thinking of that one because in it, too, the Yorkshire moors are almost a character.

Can you think of any great but flawed books?
Posted by Libby Koponen at 4:30 AM

It's been about 8 months since I watched this version of Wuthering Heights -- can you go into more detail about which scene you're talking about? Possibly with spoiler warnings, I suppose, if you're worried about ruining it for people who haven't seen it yet. :>

Thanks, Julie! It may not sound as good when I describe it as it was on screen, but: .it was when Cathy (very ill) d went to Pennistone Crags in the rain and Healthcliff found her. The scene took place in a cave/under a crag -- he was holding her and it was an intensely tender (and completely believable) love scene -- very short! She worried about what was going to happen and he said (and the ACTING here was so good):
"There is no Edgar. There is no Isabella. There is only...."

Also, the scene when she rode out to meet him on the moors and they had that fight (the one in which he was so scornful and sarcastic; it ended in her saying "What have I done?!") wasn't in the book, either.

It's rare to see a love story that isn't sentimental -- I think one of the things I loved about this was that it captured the originality and intensity and complexity of feeling the book had WITHOUT making it all Hollywood and sentimental -- they made Linton (the boy) less horrible than he was in the book, and Nellie didn't dislike Catherine quite as much; but all the othe characters were faithfully done.
Even Hareton! He worked for me better int he movie than in the book though now I will read it better, I think.

I admit I am a HUGE Tom Hardy fan. I thought his interepretation of Robery Leiceter's character in THE VIRGIN QUEEN was equally brilliant.