A few weeks ago we had our biannual Library Preview. We introduced our Fall/Winter 2011 list to local librarians, reviewers, and educators. As usual, our School and Library Marketing Director/Guru wore amazing shoes for the occasion: 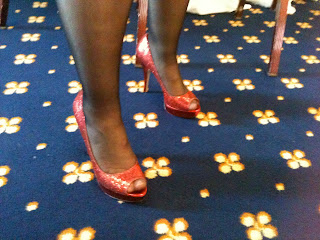 Our super secret guest star was author/illustrator Sujean Rim, creator of Birdie's Big Girl Shoes and the upcoming Birdie's Big Girl Dress. She talked about working in fashion, yet always harboring a love of children's books: 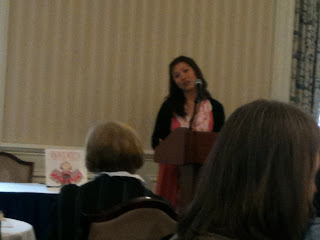 So, since we were talking about Fall/Winter 2011, I thought I'd give you all a sneak peek at the books I've edited on that list. Except as I started writing this, I realized that I had given an earlier sneak peek back in October here. Although, back then we didn't have all of the titles or covers finalized yet. Well, many of the covers are still in progress now (particularly for the YA titles, for some reason), but I thought I'd go ahead and post the covers we do have below. And since I described the books in more detail then, I'll be brief here. 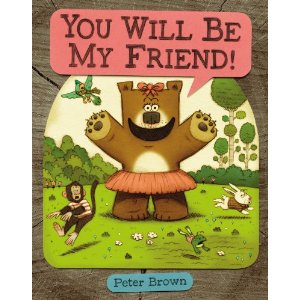 YOU WILL BE MY FRIEND! by Peter Brown (Sept. 2011)
This is a companion book to Children Make Terrible Pets. In this adventure, Lucy the Bear decides that she's going to make a new friend. Of course, this doesn't turn out to be as easy as she thinks it's going to be. 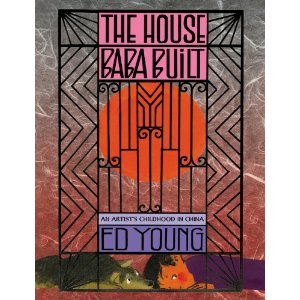 The House Baba Built: An artist's childhood in China by Ed Young, as told to Libby Koponon (Oct. 2011)
This book has been a labor of love for everyone involved--we've been working on it for over two years, and in a sense, Ed has been writing it for his whole life, although in earnest since he became a father. This is an illustrated memoir of his childhood in Shanghai during World War II, living in the house his father (Baba) built to keep his family safe.

In this sequel to Year of the Dog and Year of the Rat, Pacy and her family visit Taiwan for a month. As usual, the food descriptions will make you hungry! And it may just make you want to visit Taiwan.

The Shattering by Karen Healey (Sept. 2011)
An idyllic New Zealand setting. Magic, romance, tragedy, humor, and a possible serial killer. What more do you want?

DJ Rising by Love Maia (Feb. 2012)
A moving debut novel about a boy from a troubled home, his love of music, and a DJ contest.

BOY21 by Matthew Quick (March 2012)
Basketball Diaries-meets-Stargirl, set in a racially charged urban neighborhood. We have a final cover for this one, but once again I don't have it on my computer. I'll update this post later.

In the meantime, I present to you the redesigned paperback cover of Matthew's first novel, Sorta Like a Rock Star: 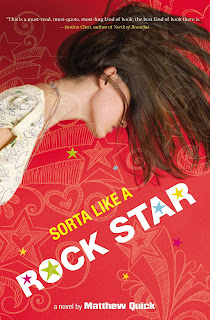 The paperback is out this May.

And finally:
Daughter of Smoke and Bone by Laini Taylor (Sept. 2011)
Once upon a time, an angel and devil fell in love. It did not end well. But oh, this book is not your typical angel book, not by a long shot. I'm excited to be speaking about this book on the YA Buzz Panel at BEA this year...I hope I can do it justice!

I hope to do a Beyond the Book post about this soon, but just wanted to give a shout out to a novel I edited that just came out officially last week. Andrea Davis Pinkney's Bird in a Box is a middle grade historical fiction about three children growing up during the Great Depression, all facing tragedy and loss, and all finding inspiration in the fights of boxer Joe Louis. 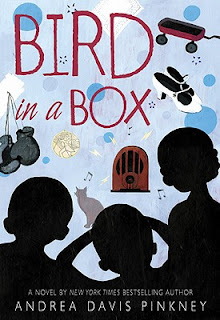 
“Bird in a Box” isn’t about Joe Louis per se. Instead, with tenderness and verve, it tells the stories of three 12-year-old black children, Hibernia, Otis and Willie, in Depression-era Elmira, N.Y. Hibernia’s mother abandoned her when she was a baby — to sing, she hoped, at the Savoy Ballroom in Harlem — leaving the girl to her preacher father. Otis and Willie grow up in the Mercy Home for Negro Orphans: Otis’s parents are killed driving their truck, and in a drunken fit, Willie’s father sticks Willie’s hands in a pot of boiling grits, reducing them to stumps and ending Willie’s own dreams of glory in the ring.

Inspiring them throughout is Joe Louis. For the three children, as for millions of Americans, Louis’s nationally broadcast fights are communal, semireligious events.

Thanks for the idea list of YA! I'll be waiting for some of these.

Wow, you ARE busy. At least you're busy editing exciting books! I can't wait to read ALL of these and pass them around.

Ha! I am crazy about the cover art for YOU WILL BE MY FRIEND! :)

Those are some really fabulous shoes. The books look great too :)

I love that picture of Grace and the cover of DUMPLING DAYS --great colors!

And of course, thank you for mentioning THE HOUSE BABA BUILT. I am so in love with that book that my opinion hardly counts, but I do think that cover is great, too!

Thanks for posting it.