from the BRG archives: being boring 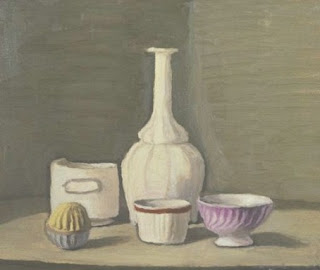 The question surprised me. Yet, in a way, looking back, I’m surprised I was surprised. It seems to be fairly par for the course that artists radically change their style, sometimes a different one for each book. Meghan even posted how she felt winners of the Caldecott are oftentimes a well-known illustrator who has changed his/her style.

Because, I think we equate change with progress and courage. “It’s so brave of him/her to change his/her style like that,” someone will say, “and not stick to his/her same old way, the same old things.”

But when I hear this, I always think of the artist Giorgio Morandi, a painter we studied in school. For most of his career he painted bottles and vases. The same objects and shapes over and over again—for years and years. Each painting was beautiful, the sensitivity to light, the placement, the simplicity of his strokes. But you’d think that by, say, painting #10, he’d figure he had still life mastered, be bored and would want to move on. But he didn’t.

And I realize how admirable his dedication was; how much braver it was for him to continue to do what he believed in. Audiences thought his work was boring and mundane, yet he continued. There was something about these still lives that fascinated him. Maybe to him, to feel that he had mastered this subject matter was hubristic. Maybe to him, there was always so much more to discover.

So, even though sometimes I worry that people think I stick to the “same old thing” (as all my books seem similar), I’m reluctant to change just for change’s sake. Right now, I enjoy finding out how much there is to discover in what others might think is a narrow field. I’m not saying that I will do sixty years worth of books on Asian culture; but when my friend asked me, “Don’t you ever want to break out?” I did say, “No.”

Email ThisBlogThis!Share to TwitterShare to FacebookShare to Pinterest
Labels: from the BRG archive, grace

I love this post and I think it takes just as much courage to keep doing the same thing as it does to change, partcularly if what you do hasn't been rewarded in a spectacular way.