Do you remember your second?

"The work of Liao, a beloved Taiwanese cartoonist, offers a meditation on blindness that will stay with readers long after they have closed the paper-over-board book."--Publisher's Weekly (starred review) 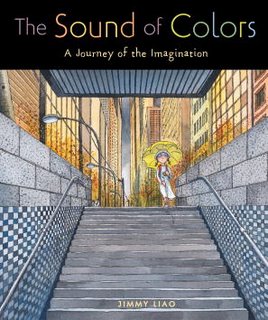 My second book acquisition, back when I was still an assistant editor, was The Sound of Colors by Jimmy Liao. This book was unlike anything we had ever published, and it took a long time for us to figure out how to publish it the right way, which is why, even though it was acquired back in early 2003, it didn't come out until March of this year. I meant to write about this back then but never got around to it, and since I was casting around for a topic to write about today, I thought I'd take the opportunity.

Sound of Colors was originally published in Taiwan as a 128-page graphic novel for the adult market. Jimmy Liao is somewhat of a superstar in Asia, and his books have been made into major motion pictures (Wong Kar-Wai!), plays, and all kinds of licensed materials (bookmarks, toys, mugs, snowglobes, etc.). But he was virtually unknown here in the states, with just one book published in English, A Chance of Sunshine published by a graphic novel publisher for the adult audience.

The agent thought that Sound of Colors would make a wonderful children's book, and gave the original Taiwanese edition to my boss to review. My boss, knowing that my family is from Taiwan, passed it on to me to review. This was right during the crazy time after our move to New York, so submissions were the last thing I was concerned about. I glanced through it quickly and loved the illustrations which I thought were similar to one of my favorite illustrators, Peter Sis. But because of its length, I didn't think it would be something we could publish on our list, and so I added it to my reading pile to deal with later. Eventually the agent called to tell us that there was an offer on the table from another publisher. So I sat down with the book and took a closer look. And...wow! I was mesmerized by the illustrations, page after page. I read the rough translation the agent had supplied, which didn't seem quite accurate, and also didn't really make sense, but it was haunting, and melancholy, and beautiful. It was about a young blind girl dealing with her recent disability. She travels through the subway system with her little white dog, and each stop is a different and magical world. She lies on the back of a whale, swims with the dolphins, flies in the air like a bird, and even travels to the end of the world. I knew I had to publish this book, and so I wrote a long memo to my boss about why I loved the book and why we should sign it up.

The next day my boss brought the book and my memo back to me and said, "I'm not going to say no, but you're going to have to figure out how to publish this. Show me your vision for this book, and then we'll see about bringing it to pub comm." I said okay, and got to work.

I spent hours color copying the entire book, then deciding which spreads to keep. I had permission from the agent to cut the book down to 96 pages, so I chose the images carefully--it was so hard, though, because I loved every illustration. I rewrote the text myself (not very well, but good enough for now), cut it out, and taped it to the color copies. When I was satisfied, I showed it to my boss who gave her approval to bring it to our acquisition meeting, but I could tell she was skeptical about its chances. This was to be my first of many attempts to use pure passion to get a project passed.

I spent hours...days, even, on the proposal. Writing the cover letter, honing the text, making copies, writing and practicing my presentation, getting costs and running different P&Ls (profit and loss). Well, I needn't drag out the suspense, since obviously you know we published the book. Everyone loved it, knew it would be a risk, but wanted to publish it anyway. One of our Sales managers, who is now a Sales Director, went absolutely crazy over the book, and she had just been looking at a black and white copy.

As I mentioned earlier, it took a long time to figure out how to do it right. We needed to figure out the production costs--how to publish this long, full-color illustrated book in hardcover, and be able to charge less than $17 so that it could go on the picture book wall. We finally settled on an 80-page, paper-over-board book. We hired an adapter to help choose the illustrations and shape the text and make it sing poetically in English, and also make it appropriate for the picture book audience while retaining the tone and message of the original. Sarah L. Thomson did a wonderful job, and I think this book is just as much hers as anyone's. Credit also goes to the designers: art director Alyssa Morris, and the freelance designer, Sue Dennen (who used to work in our Boston office).

I am incredibly proud of this book, partially because it was such a challenge. And I'm even more thrilled that we've gotten such a great response to it: a starred review in Publisher's Weekly, a Book Sense pick, and a Borders Original Voices nominee. And perhaps best of all, it received a glowing review from Fuse#8, before I knew who Fuse#8 was! (I first read her review on Amazon.com, and it wasn't until a month or so ago that I connected the two.) It's doing quite well, and is in its second printing. We've signed up two more books, with The Blue Stone set to come out in Spring 2008.

One of my favorite things about this book is that it works on so many levels. Young children will just delight in poring over the illustrations. Older children will understand that this is about a young girl overcoming her disability. And adults will have their own interpretations. There are so many layers to the work.

I hope you guys don't mind that I occasionally write about the books I edit. I enjoy telling the behind-the-scenes stories, and want to help introduce the books to the world. And so hey--if this inspires you to go out and buy the book, I'm not gonna stop you! You won't regret it. As I said in the back cover copy on the book, "Jimmy Liao celebrates the power of the human spirit. This is a moving, magical journey readers won't soon forget."
Posted by alvinaling at 12:17 PM

I just read this a few months ago and loved it. So beautiful....!

Thanks, Alvina, for the behind-the-scenes story. This sounds like an amazing book! I'll have to look for it when I come to the states for xmas. I also remember my first, second, etc. Each one is its own tale, isn't it? Please, share away!
-Laura

The book is beautiful Alvina, nice work! Like you said it has so many layers, and perfectly expresses how I imagine it would be like to go through the world not being able to see. Something about the storytelling feels like Peter Sis's style too, not just the illustrations, it has that magical spare feeling that his books do.

I think this is really interesting, especially when you speak about how your boss had hesitations about it. I think author and illustrators forget that editors have to jump through hoops too...it's heartwarming to know that you were able to get it through with "just passion."

Alvina, a friend Cindy Lord brought home to me how and why our work has to glow and connect, when she talked of how many times her editor had to go through the same journey of bringing her book to print. I'd never looked at it in that light, though of course I'm aware that editors REALLY LOVE BOOKS, something else I greatly admire. I appreciate the insider look, for sure.

I do have a question and please forgive my confusion. At ninety pages, why would this not be considered a graphic novel? The age level? Some other consideration, or is it more of a crossover thing? And yah, of course I ask for selfish reasons!

The book looks beautiful. I'll be on the lookout for it (Santa, you listening?).

Agy--the book was 80 pages, and what a book is classified as is oftentimes dependent on how the publisher markets it, catalogs it, and where the bookstores shelve it. We thought that the best place for this book to be discovered would be in the picture book section, and so made sure the format, price, and age level was appropriate for this section, and first sold it to the picture book buyers of bookstores. And to my knowledge, that's where it's been shelved. We did, however, cross-catalog this with our art book/coffee table book division in the hopes that it would find cross-over appeal.

And Grace, the truth is that it didn't get through based on just my passion--although I was prepared to try to plow through the committee that way! Thankfully, it turned out that this book really touched and affected the committee, too. So in the end, this book was published with the full support of my publisher, and many people's passion.

Thanks for the inside story. I loved this book and have been recommending it around. It's neat to read about how it came to be published.

I happen to see your blog on-line and am very interested in this book, 'Sound of Colours', that you translated.

Please allow me to introduce myself briefly. My name is Sabrina, a Chinese teacher in London. My students are mainly British Born Chinese who are in between the ages of 11-14. I use this book as a teaching material for my Chinese English translation class. My students have no clues as yet what the Chinese text is. However, they can sense it's a story about a blind girl looking for dreams, exits.

This is absolutely a great book for them, especially for intermediate Chinese language learners. If possible, could you allow me to send you some of my students' work to you (some of them are very talented) and perhaps hear some feedback from you on their work. I'm planning to reveal this book to them at the end of this term (which will be in the mid Dec). If I could also let them know your opinions about their work (a voice from the translator), I'm sure they will be overwhelmed.

Please email me to zehramau@gmail.com if you think this is feasible and we can discuss more details regarding this. I will be very very grateful if I could hear from you soon.