HOW MUCH DOES OUR APPEARANCE MATTER?

Last weekend I heard the Violent Femmes play in good old Brooklyn. Who are the Violent Femmes, you ask? Well, I’d hope you would all know but for those who don’t—Does BLISTER IN THE SUN… ring a bell? How about GONE DADDY GONE? Anyway, I first knew about them when I was a young grunge/alternative fan --back when alternative meant something… now it’s like “indie,” which is also losing its meaning. Boo-hoo. Yes, I digress.

Here are the Femmes yesterday— 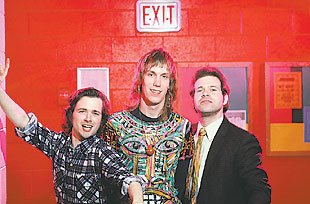 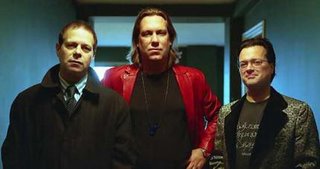 The show was great. Lots of energy. An enthusiastic, screaming crowd. Great fun. But as I was leaving, a friend of mine said what I was thinking. She said “They’re old, huh? Kind of depressing.” Yes! It was! “No one was under 25. We’re getting old.” This is particularly relevant since it’s my birthday in several weeks. I am already depressed. I am already becoming a Violent Femme. As their song says--Gone daddy gone, the love is gone.

Yes, dear reader, I DO have a point. I like to trick you into thinking that I’m going to ramble on about nothing, which admittedly, I sometimes do.

MY QUESTION:
Do children’s book authors age like fine wine or do they prune up and give their past beloved fans the bad taste of their own mortality?

DOES OUR APPEARANCE MATTER?

Example: Ever noticed how certain children’s authors use THE SAME PHOTO on the back of their jacket FOR YEARS? I always think “Hey, who are you fooling? That hat is straight out of the 80s. Update it! Proudly display your aged face!” But then I think—“Huh. That could be me. Would I want to do that?” Now, I must admit that I’ve expressed a strong refusal to put any photo on the back of any of my books. The reason? I don’t take good pictures and I’m vain. If I can't look like American's Next Top Super Model then I don't want to look like anything. There you have it. But perhaps I should before I get too old!

And now, dear readers, I will delve deeper. Does an author’s appearance matter to the publisher? Will they give more marketing and encourage the author to appear more in public if they’re ATTRACTIVE? Does the poor slob with warts all over his or her face get stuffed into a closet? Will that young mom gravitate to the hot guy who just penned his first book? DOES THE READER CARE? Perhaps he or she does. Perhaps after seeing this wart-infested author who frighteningly resembles the witch portrayed in their very picture book, the young child will run screaming in horror. After all, Disney has already set the stage for children everywhere to believe that attractive people are GOOD and the unattractive are BAD. 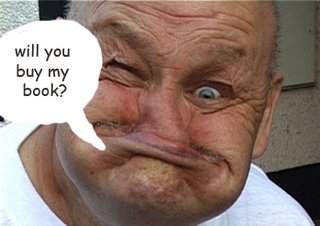 Posted by Meghan McCarthy at 1:56 PM

You're TOO funny. I think you should be writing comedy and start doing your stand-up routines
at various clubs in the city.
Imagine the headlines!
Kidlit Author and Illustrator Has 'Em Falling off Their Bar Stools!

My take on the Violent Femmes? They look better to ME today. Then again, I'm going to be sixty next month.

Have you read this? After reading the article when it was published last year, I almost yanked my author photo off my website. I always thought it was great that so many children's and YA books did not have author photos on the back flap. It's rare to find a new "adult" book without an author photo.

Ah such an interesting topic. We all know that appearance does matter, like it or not books are judged by their covers all the time, and so are authors! Its just human nature. I think its better to accept the fact and make the best of it. Fortunately its not the ONLY way we are judged, our books count too, to some people, maybe not to marketing execs...

Thanks for this post, Meghan -- this is something I think (and worry)about a lot. It's great to have it brought out in the open!

I think there's no doubt that to marketing departments, "promotable' = "young and hot," even though there is no evidence that readers like books any more or less because of the author's looks -- or age, for that matter. One more way marketing departments in publishing don't get it right.

So what can we about the looks thing? As far as changing marketing departments' thinking, probably nothing....but maybe there is LOTS we can do with photographs! Maybe have a jacket photo that shows what we are like as people in such a vivid, interesting way that it will draw people in? have a friend paint a portrait(or you illustrators could paint your own)? pose a glam shot with a professional photographer who's good at lighting? hire a super-model and pretend it's me?

The Captain Underpants author used a picture of himselg as a kid on one of his books.

ANYWAY, fascinating post and I love the Violent Femmes. too. I saw them in Boston in the early 90s and have most of their albums -- do any of you know the song "I Hope That You Got Fat"? If not I must play it for you the next time we're all eating cupcakes together!

Hmmmmm . . . how do we really know if the people sent out on promotional appearances are REALLY those authors.

Maybe they are just "author stand-ins."

Ha ha. I enjoy the way you start your entries like an episode of Sex & the City. I can almost hear SJP saying, "Does our appearance matter?". ANYway, I'd say for a kid, probably not. I loved Tomie dePaola as a kid, and I never saw a picture of him (I still don't know what he looks like). Actually, I never equated authors or illustrators with real people at all as a kid! They were almost like dieties to me- unknowable creators. If I had been able to meet Beverly Cleary as a kid, I think I may have died!

From a PUBLISHING standpoint... well, the authors that my company seems to push to tour a lot are those that are really engaging and good speakers- not necessarily the most attractive authors! I'll often hear, "so-and-so is so warm and funny and engaging in her talks- let's try and send her to more schools/stores". And the hot books that my company is pushing at the moment are really due to content, not to the author's appearance OR ease at public speaking.

Of course, we do have one or two especially dishy male illustrators, and funnily enough, ALL of the females are sure to be in the office on days they're coming in to visit...

Of course appearance doesn't matter (said the creator of the Hot Men of Children's Literature series). But in my experience, author/illustrators are gorgeous folks on the whole. Take Judy Blume. Have you seen that woman lately? Judy Blume is seriously smoking and has continued to smoke for years.

... what was I saying again? Oh yes. Appearance. Not important.

Yes, fuse #8, I believe you are the queen of the "hot men of children's literature." I laughed when you picked my fellow risd classmate chad. In a good way. I laughed in a good way!

The truth is that I fantasize about wearing a pink robe and boa and appearing from a thick fog to sign books. Hmm. Maybe I'm supposed to be a romance novelist.

The pic is horribly funny!!

This is an awesome topic, and I don't know the answer.

I do know how I felt about it as a kid, though--and I think it's going to be unpopular news.

I never naturally expected to see author photos as a kid, so was constantly surprised whenever they were offered. That's because, as a kid, I mostly borrowed/bought/read paperbacks (which rarely had author photos) from the classroom and the library, but also occasionally borrowed library hardbacks.

Anyway, so I'd always be excited and would study the pics with great interest. And, you know what?

I was always disappointed/startled by what authors really looked like. These people were HEROES to me, and I wanted to be just like them, and I was constantly thrown by how unlike me they really looked! There were a couple favorite authors in particular, but it was more the growing sense, over and over, that ALL of them were unlike me in the exact SAME way. Namely, they were all a lot older and a lot, um, more caucasian, than I pictured.

I was a kid. I wasn't aware of my expectations. Apparently I was also age-ist and felt other-ized by the heroes whom I one day wanted to be my peers. I basically wound up blocking those images out.

Cartoons and KID pictures, on the other hand, when offered as author photos, interested me a LOT. I thought it was quirky and a little ornery (but HILARIOUS) that some authors deliberately wouldn't show what they looked like. But I didn't think much about that. I accepted and loved those pics.

THESE days I see author photos in an entirely different way, and relate to them differently--plus, the authors I read have become a whole lot more diverse, so I no longer even think about the demographic issue. At all.

But that's what I remember from childhood: that growing, sneaking suspicion that eventually became acceptance that that's how "all" children's book authors "really" looked. And that, ultimately, I would rather not have known.

So what will *I* do (who am not yet old and also not white), when given the chance?

(I kind of still think a *kid* would rather not know, but as a kid I also could have used some competing role models. Maybe the cartoon is the way to go?)