Well, so in my last post you saw what it takes to make a Blue Rose Girl cupcake...shipping it, however, is another matter. Many moments and brain cells were used to try to figure out safe shipping. The cupcake foils were taped into their carriers and then frozen for 2 days to make them hardier and fresher upon their delivery in... 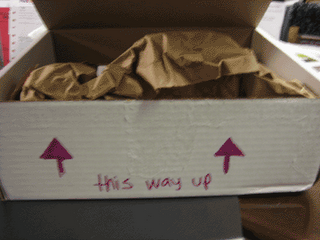 this box, which was well marked in hopes that they would not be jostled too much. 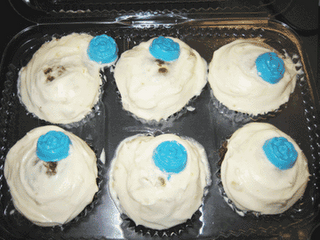 But, unfortunately, they still arrived slightly melted in NYC, 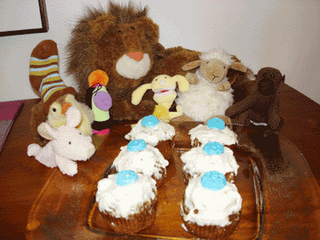 and a bit undone in CA.


However, I suppose not too bad for the first time. I have some more ideas on how to even better transport them; perhaps even just shipping the cupcakes naked with a little container of frosting for winners to dress them themselves. Anyway, I was told that they were absolutely delicious --so you still really want to win them in our next contest. Really, really, really!

Just in case you can't wait, here's the recipe:

1.Preheat oven to 375. insert liners into cupcake pan (use foil liners, I don't know why but the foil ones make them bake better, paper liners make the cakes denser)
2. In a large bowl, cream the butter and sugars together until fluffy. Add egg, molasses and lemon zest. Beat well.
3.In a separate bowl, combine flour, baking soda, cinnamon, ginger & cloves (tip: I use cake flour instead of all-purpose as it gives the cakes a more delicate texture, but you have to substitute 1 cup plus 2 tablespoons of cake flour for 1 cup of all-purpose flour--so for this recipe, it would be 2 1/2 cups plus 5 tablespoons of cake flour)
4.Add portions of dry ingredients to creamed mixture, alternating with portions of sour cream until completely integrated
5.Fill cupcake liners 3/4 full. Bake for 15-20 minutes or until inserted toothpick comes out clean. Cool in pan.

1.In a medium bowl cream together cream cheese and butter until smooth
2. Slowly sift in confectionary sugar and ground ginger until there are no more lumps
3. Mix vanilla and candied ginger until fully integrated
Posted by Grace Lin at 12:19 AM

The recipes for the gingerbread cupcakes and candied ginger icing sound yummy!

I think you may have to publish a Blue Rose Girls Cupcake Book some day.

That recipe looks amazing. We've tried a similar spice cake, but the molasses smell was almost overpowering -- like some kind of roofing material. Yowza. And the sour cream sounds very interesting. Never done that before. Thanks for the post!

Yes, the cupcakes were DELICIOUS--and the people I shared them with here agree. Fabulous.

Was the recipe from that book I gave you last year? If so, that was the best gift I've ever given anyone. The gift that gives back! :)