Today I am going to promote a lovely little book at Blue Rose Girls. The title of the book is ROBERT’S SNOWFLAKES: ARTISTS’ SNOWFLAKES FOR CANCER’S CURE. Grace Lin and her husband Robert Mercer compiled this little gem of a book that features a collection of snowflake art created by dozens of children’s picture book illustrators—including Eric Carle, Denise Fleming, Marjorie Priceman, David Shannon, Emily Arnold McCully, David Macaulay, Graeme Base, Ian Falconer, David McPhail, Trina Schart Hyman, and four of the Blue Rose Girls. These unique pieces were painted, collaged, and sculpted for the 2004 Robert’s Snow auction that helped to raise money for the Dana-Farber Cancer Institute in Boston, Massachusetts.

ROBERT’S SNOWFLAKES is truly a collector’s item—and would make a fine holiday gift. There’s even a little surprise at the back of the book: a keepsake punch-out snowflake designed by Grace. In addition to the wonderful snowflake art, the book includes haiku poems written by Jane Yolen, Heidi Stemple, Janet Wong, Jennifer Holm, Charlotte Zolotow and Crescent Dragowagon, April Halprin Wayland, Carole Lexa Schaefer, and me. These are poems you won’t find in any other poetry book. They were written especially for ROBERT’S SNOWFLAKES!

Here’s the best part of it all: 100% of the royalties from the book will go to the Dana-Farber Cancer Institute to help fund cancer research. Think about it: You can own a book of beautiful art created by many of the most renowned children’s picture book illustrators and contribute to a worthy cause at the same time.

Take a look at one of the two-page spreads from ROBERT’S SNOWFLAKES: 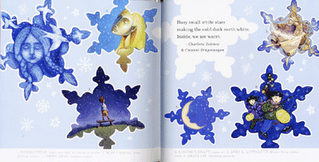 Isn’t it lovely? You can see one of the two snowflakes Grace made for the 2004 auction in the bottom right hand corner. Phoebe Stone, Loren Long, Scott Bakal, Kinuko Y. Craft, and Gary A. Lippincott created the other snowflakes shown above.

All of the “one-of-a-kind” snowflakes featured in ROBERT’S SNOWFLAKES were auctioned off in the late fall of 2004. The auction raised over $100,000 for Dana-Farber. As Grace writes at the beginning of the book: “After the auction, we received many requests to make a snowflake book. ‘It would be a shame,’ one wrote, ‘to have the snowflakes just melt away.’ We agreed and produced ROBERT’S SNOWFLAKES, which not only features the snowflakes but gives 100 percent of its royalties to the Dana-Farber Cancer Institute.”


As for myself…I definitely did my part to help raise money for cancer research. I bought four of the 2004 snowflakes. (I also bought five of the 2005 snowflakes.) Here are the “snowflakes” I won in the 2004 auction: 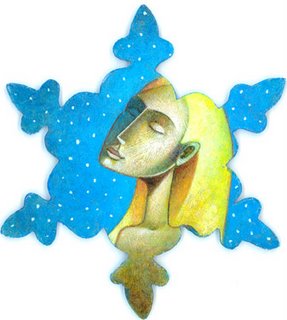 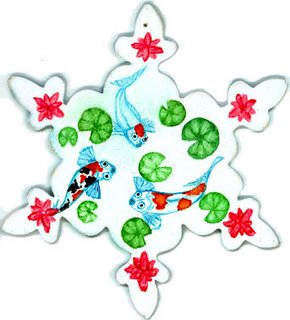 You can also see the same “Koi” in ONE LEAF RIDES THE WIND, a book of haiku poetry written by Celeste Davidson Mannis that was beautifully illustrated by Kathleen. Kathleen is also the illustrator of DEAR JUNO, ONE DARK NIGHT, and CHRISTMAS MOUSELING.

Here is Polar Snow, the charming polar bear snowflake painted by Phyllis Harris that I won it in the final seconds of Auction 2 in 2004: 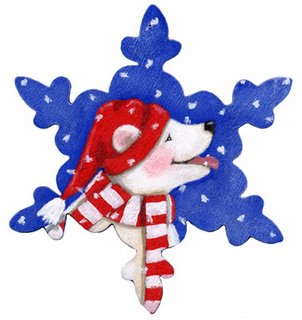 I REALLY wanted Polar Snow. I was so happy when I received notification that I was the winning bidder.

And, last but not least, I present to you Remembering Avercamp, the gorgeous snowflake painted by Gabi Swiatkowska, the illustrator of MY NAME IS YOON, ARROWHAWK, SUMMERTIME WALTZ, and WAITING FOR GREGORY: 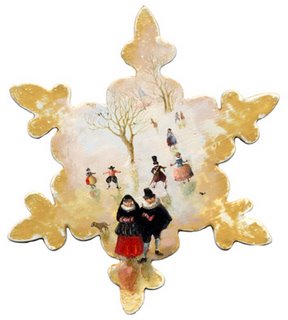 Gabi’s snowflake is so exquisite it really should be exhibited in a museum of fine art.

ROBERT’S SNOWFLAKES has a special place in my heart—and not only because my first children’s poem was published in the book. I was a sponsor of Robert’s Snow and helped out with some of the Robert’s Snow events. Grace’s husband Robert is a good friend—and a cancer survivor. I know other cancer survivors—one of whom is named Daisy Locke. Daisy is the young daughter of two other good friends. She is the reason my sixty-year-old husband participated in the 2006 Pan Mass Challenge sponsored by Dana-Farber. Team Daisy raised $65,000 for the Jimmy Fund. 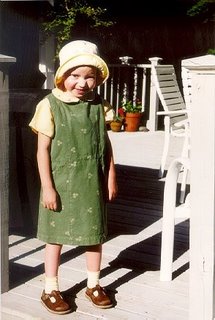 This is my friend Daisy Locke. Daisy has shown the adults in her life what courage is all about. I admire her spirit and spunk. She is one of my heroes.


(Here is a link to the Team Daisy page at the Pan Mass Challenge website.)

Events like the Pan Mass Challenge and Robert’s Snow are wonderful ways for people to contribute money for cancer research. ROBERT’S SNOWFLAKES is another way to contribute…and to receive a beautiful reminder of that contribution.


Oh, look! It’s snowing art!!! Here is a small flurry of flakes from the 2004 Robert’s Snow auction created by the Blue Rose Girls and their good friend JJK.

Top row from left to right: A Cat in the Snow by Anna Alter, Spirit by Grace Lin

Middle row from left to right: Reindeer with a Red Nose Wearing a Black Collar by Meghan McCarthy, Skate Pond by Linda Wingerter

Bottom row from left to right: Harmony by Grace Lin, May All Your Bake Sales Be Bright by Jarrett Krosoczka

Just one more thing: You may want to check out ROBERT’S SNOW, "the book that started it all!"


Happy Holiday Shopping!!!
Posted by Elaine Magliaro at 1:00 AM