TO THE MOON AND MARS 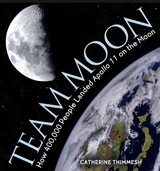 Extra! Extra! Read all about it! Don’t forget the CUPCAKE CONTEST. Remember, the rules were changed. Read the small print at the bottom of the contest post.
Posted by Elaine Magliaro at 9:45 AM

Y'know, I didn't get the Robert Frost reference, silly me. This is what I get for leaving my grown-up poetry books in storage when I moved.

Good stuff about Mary and her moon. I'll have to sing that for my son, who's also a big astronomy buff. He also got a package yesterday: souvenir photos of early Gemini missions from when an uncle of mine worked for Grumman. My mother had saved them all these years.

My son is, well, over the moon about it.

Thanks again for your witty verses.