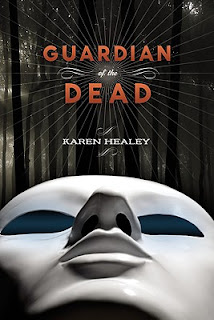 In less than a day I had been harassed, enchanted, shouted at, cried on, and clawed. I’d been cold, scared, dirty, exhausted, hungry, and miserable. And up until now, I’d been mildly impressed with my ability to cope.

At her boarding school in New Zealand, Ellie Spencer is like any ordinary teen: she hangs out with her best friend, Kevin; obsesses over her crush on a mysterious boy; and her biggest worry is her paper deadline. Then everything changes: In the foggy woods near the school, something ancient and deadly is waiting.


As I've mentioned on this blog, my very first agent lunch was with Barry Goldblatt. And if I think about the success rate of submission to acquisitions of any agent, he would be number one. The first thing he ever sent me was GEEKTASTIC by Holly Black and Cecil Castellucci. The most recent submission/acquisition was The Diviners series by Libba Bray. And in between? He sent me Guardian of the Dead. There may be another submission or two somewhere in between all of these that I've turned down, but my memory is failing me. So: We're three for three! And wow, what a three they are.

Barry called me first to ask if I liked urban fantasy--up till then, I hadn't published any fantasy on my list. But yes, I did like it, and I'm glad he called to ask first rather than assume. Then again, that's why he's a good agent. He knows these things.

I first read Guardian of a Dead when I was going through a "reading slump"--I hadn't read a submission that I had loved in at least a few months, and I despaired that I would never again find love. Well, I fell in love with this novel.

I was absolutely blown away by the voice. It was strong, fresh, and authentic. And I fell in love with the main character, Ellie. To be frank, she's overweight and not as put-together as she would like, but she’s also a martial arts master and is just plain kick-ass. In fact, I can't think of a better adjective to describe her than kick-ass. It really fits.

I loved the setting: New Zealand. And I loved that overall the book was different. Yes, it's urban fantasy, and yes, there's a romance, but there's not a vampire, werewolf or zombie in sight. No angels, either. As for fairies...well, kinda. But you've never seen fairies like this before in YA lit!

Did it have some problems? Of course. The main issue being that in that draft that I read, Ellie was in college, and acted as such (lots of casual sexual encounters, drinking, etc.). But I knew all that was editable, and fell in love with all the things it had going for it: delicious horror elements, incredible action and adventure, mystery, magic, humor, romance, betrayal, monsters, and of course an epic battle at the end.


It’s been a long time since a debut novel grabbed me by the throat and wouldn’t let go. Quite simply, GUARDIAN OF THE DEAD is my favorite kind of read—creepy, funny, sexy, smart, and sometimes just downright, pull-the-covers-up-to-your-neck-and-pray-for-morning frightening. This book completely rocked my socks.

I acquired the book in auction while Barry was also selling to an Australian publisher, as Karen was a New Zealander living in Australia. The Australian publisher is Allen & Unwin, and we agreed to edit the book together, which was an interesting and rewarding process, and we were lucky to all be on the same page about what we felt needed to happen. Their posts about Karen on their Alien Onion blog are here. It's been a great experience! Great synergy. And may I just add that Karen is a fantastic reviser?

Some other things this books has that makes it unusual/special:
-an asexual character (I know--whoa!)
-a fantastic multicultural cast, including a strong Chinese New Zealander gal, Iris.
-because Karen borrows from the Maori culture for the mythology of the book, she had several cultural consultants read various drafts to make sure she got it right. Or, at least, as right as she could hope to achieve.

If you read the cultural consultants post I linked to a few lines above, you'll know that Karen is a great blogger as well. And I've loved her writing about the process--I've been in the publishing business for a while, and I sometimes forget that for a debut author, the whole process is all shiny and new. It's great to see it all in that light again.

Here are a few of my favorite of her blog posts about the book:

I absolutely adore this novel. It's so durned good. Really. Read it! Others have, and they've liked it! A lot! Here's what some other authors and reviewers have to say:

“Guardian of the Dead is funny, heartbreaking and always interesting: Ellie is one of my favourite heroines.” – Sarah Rees Brennan (The Demon’s Lexicon)

“A fresh and original urban fantasy debut with none of the usual suspects. More please!” –Justine Larbalestier (Magic or Madness series, Liar)

“Guardian of the Dead is an action-packed tale with an uncanny balance of romance and mystery. I found myself mesmerized by the legends and stories woven into modern-day New Zealand.” – Becca Fitzpatrick (Hush, Hush)

"Dynamic...Ellie is both inspiring and enjoyably real." --Romantic Times

The official pub date is this Thursday, April 1, but I've heard that it's already out in stores (although I have yet to see it in the wild myself). I'm so excited to introduce Guardian of the Dead to the world. Karen Healey certainly has a bright future ahead of her, and I'm honored and excited to be with her on the journey.