Beyond the Book: I Can Be Anything! by Jerry Spinelli, illustrated by Jimmy Liao (and also, EGGS)

Beyond the Book: I Can Be Anything! by Jerry Spinelli, illustrated by Jimmy Liao (and also, Eggs)

(aka, How I became Jerry Spinelli's editor at Little, Brown) 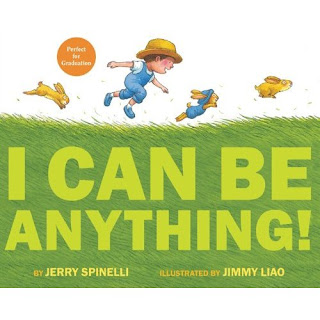 I wrote about I Can Be Anything! ages ago (October 2008, to be exact) in my post about matching picture book texts with illustrators. The book is finally out in stores! And yes, it can take a long time for a picture book to make it into the world. To put it into perspective. we signed up the text around the same time we had signed up Jerry Spinelli's novel Eggs, which pubbed in June 2007. 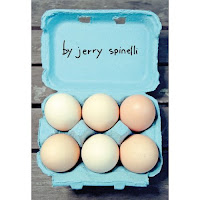 I just went back to look, and it appears that I never did a "Beyond the Book" post for Eggs;  I'll touch on that book a bit in this post, because the acquisition of these two books are inextricably linked.

It was fairly soon after my department was relocated from Boston to New York. I was an assistant or associate editor at the time. Assistant editors and associate editors are generally the ones in editorial who are handed projects to oversee. Yes, I was also acquiring my own books, but much of my list consisted of projects I inherited from either my boss or editors who left. Jerry hadn't published a new book with Little, Brown since the Newbery-Award winning Maniac Magee in 1990, and his editor had since retired. We still had his backlist going strong (mainly his first four novels: Space Station Seventh Grade, Who Put That Hair in My Toothpaste, Jason and Marceline, and Maniac Magee), and I was asked to oversee a redesign and "branding" of the four books. I was happy to comply, and set to reading all of the books over again. While reading Space Station Seventh Grade, I noticed some outdated language, namely the word "Oriental." I emailed the publisher to ask if they thought it would be okay to update the language (to "Asian"), and he said "Yes, but run it by Jerry first." Now, up to this point I had yet to be in touch with Jerry directly, and was a bit intimidated! But I emailed him, introduced myself, and explained what I was hoping to do. He emailed right back and said thank you and yes, please do update the books, and then asked, "Are you my new editor at Little, Brown?"

Well. What could I say to that? I believe I answered that I was his new "editorial contact" but I also decided that then would be a good idea to send him a fan letter, and so I did. Gosh, I wish I still had that email, but the gist of it was that I was a huge fan of his work, and that I knew he had a relationship with other publishers, but if in the unlikely event that his other publishers were to pass on a project, I would be more than excited to "welcome him home" to Little, Brown.

Well, he agreed that he couldn't see adding a third publisher to his rotation but did say he would love to work with Little, Brown again, perhaps in another genre--picture books perhaps?

He sent me a collection of his poetry, and the text that was to become I Can Be Anything rose to the top as the one that would make a perfect picture book. Here's a sampling:

When I grow up,
what shall I be?
Of all my many many jobs,
which one will be the best for me?
pumpkin grower
dandelion blower
paper plane folder
puppy dog holder
puddle stomper
apple chomper
tin can kicker
mixing bowl licker

In the meantime, a forgotten manuscript for a middle grade novel surfaced. Jerry emailed me to say that his wife Eileen reminded him of an unpublished novel he had written about ten years prior and then put aside. He found it (in the bottom of his closet, he said), Eileen read it, pronounced it as good as his other books, and he sent it along to me. It was titled "Who Cares?" and was about the unlikely friendship between a little boy who had recently lost his mother, and a teen girl growing up without her father. I found it to be a quirky, poignant, beautiful little gem of a book. This is the manuscript that would become the book Eggs.

While Eggs was being edited and revised, I set out to find the right illustrator for I Can Be Anything. As I mentioned in that past post, we were looking for something who could take the simple but magical text and add another layer to the book. I didn't initially consider Jimmy Liao despite loving his art, because his illustrations in Sound of Colors and The Blue Stone were more sophisticated that I envisioned for Jerry's text. But one day while looking through some of Jimmy's other books published in Taiwan, I realized he also had a younger style that would be perfect for the book. I consulted with the designer, Alison Impey, who also designed The Blue Stone, and we agreed that he would be the perfect choice.

When I first approached Jimmy with the text, he initially said no, because he felt he wouldn't be able to fully understand the nuances of the English text (Jimmy is a native of Taiwan and not a fluent English speaker). However, I urged him to reconsider and assured him that we would work closely together on the project, and that I would even fly to Taiwan to work with him if need be. Fortunately (or unfortunately!), this wasn't necessary, and there was only a little back-and-forthing needed. The toughest text translation-wise to explain was "best-part saver," but that came out perfectly in the end (see below).

When the final art came in (all the way from Taiwan), it was a ridiculously giddy and exciting time unveiling each piece in the conference room. The sketches did not do the art justice at all. The colors were so bright, the characters so playful, great expressions, a bit psychedelic, and I love the little bunny buddy in blue that appears on each spread. 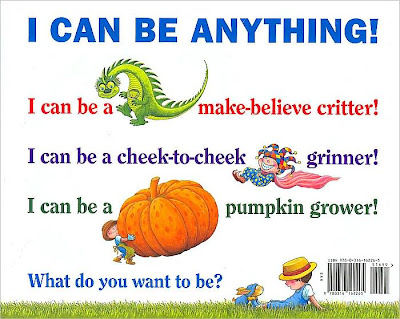 I Can Be Anything is just out now, but it has already received two starred reviews:

"An inspired take on a timeless question."--Kirkus, starred review

"It's an uplifting, imaginative vision of life's possibilities that suggests that there are no limits—not even the sky." --Publisher's Weekly, starred review

And if I may make a suggestion: It's a perfect graduation gift for a child or adult!

By the way, Eggs is now available in both hardcover and paperback.

And now I am proud to be able to say: Yes, I am Jerry Spinelli's editor at Little, Brown. 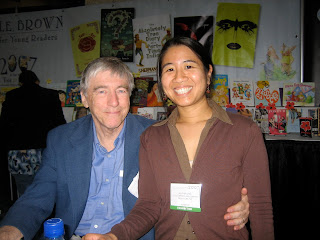 Email ThisBlogThis!Share to TwitterShare to FacebookShare to Pinterest
Labels: alvina, Beyond the Book, books alvina has edited

Oh, my gosh, the illustrations for this book really make the story sing. I would buy it in a heartbeat for my kids (who range in age from 13 to 1). I have long been a fan of Jerry Spinelli (I had the opportunity to meet him at Chautauqua in 2003), and EGGS is one of my favorite books. Thank you for sharing this story about the road to publication for both of these books.

Thanks for the post. I remember reading about I CAN BE ANYTHING! at Blue Rose Girls before--and thought it looked like a terrific picture book. I just called my friend Pat at her children's book store and ordered myself a copy.

What an awesome-looking book! But why, oh why, does it have to have that icky "Perfect for Graduation" thing spoiling the front cover??? That had to have come from Sales, I bet. ARGH.

Don't worry, Amy--it's a removeable sticker! But yes, it was a sales and marketing decision. Hey, we need all the hooks we can get these days!

Oh, it's only a sticker. Whew! I didn't think they'd splurge for a sticker, but I guess it is Jerry Spinelli! :)