Recently, Where the Mountain Meets the Moon was awarded the Josette Frank Award for fiction by the Banks St. College of Education. I was thrilled to accept at the awards ceremony, especially when I saw the impressive list of books that were also honored. 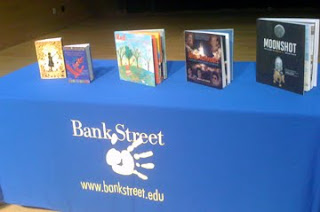 The Evolution of Calpurnia Tate, Where the Mountain Meets the Moon, Red Sings from Treetops, Almost Astronauts, Moonshot
It was also great fun to meet and catch up with the other authors as well! 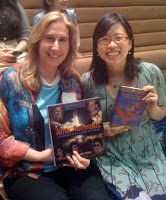 pic 1: Pamela Zagarenski, me, Joyce Sidman, Alvina Ling
pic 2:Tanya Lee Stone, me
However, the only thing I wasn't exactly thrilled about was that I was expected to make an acceptance speech. I was told it didn't have to be anything too formal, but I know that I have a tendency to stutter and blather incoherently if I try to do anything off the cuff. Also, I truly wanted everyone to know how much I appreciated the attention and honor they had given my book. So, I was a bit nervous. 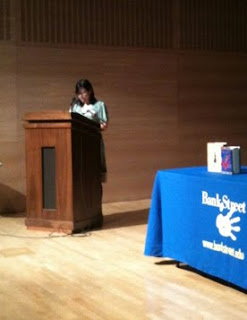 After I gave my little speech, Alvina suggested that I post it online. At first, I thought I wouldn't...but then I realized that my thanks were incomplete; that there were so many other people I was grateful to.

So, even though this speech was addressed to the Bank Street Committee, it is also for Newbery Committee, the Indies Choice Booksellers, the Parent Choice Reviewers, the teachers, parents, librarians, and kids...this is for anyone who read Where the Mountain Meets the Moon and loved it:

Thank you so much for your great honor.

Where the Mountain Meets the Moon was a labor of love for me and everyone involved—from the wonderful editing of my friend Alvina Ling & Connie Hsu to the production and design by Alison Impey and the marketing efforts of Victoria Stapleton & Zoe Luderitz. I am truly grateful for this award.

And I suppose it is apropos that gratitude is the emotion that I feel, standing here, as it is a primary theme of the book. It is, in fact, what Where the Mountain Meets the Moon claims as the secret to happiness. Minli travels long and far to discover this; and looking back, I realize that I, too, journeyed a distance to be here today.

Because this book was perhaps a book of destiny for me. Even though it was inspired by stories I read as a child and travels to Asia as an adult, I only began to write it when pushed by my late husband Robert. Even while terminally ill, he enjoyed hearing my writing and asked me to write a fantasy—something to help him imagine he was elsewhere. And so I began.

But midway through, Robert’s life journey ended and, at my lowest points of grief and sorrow I believed that that was end of the book as well. It was suppose to be a book about hope, a book about overcoming and accomplishing the impossible—just as I had fantasized about Robert’s illness. But as his death became unflinchingly real, the unfinished story was, to me, lost.

Until one day, a friend of mine, the poet Janet Wong came to visit. She asked about the story and I shook my head.

“I couldn’t finish it before Robert died,” I said, “Maybe it wasn’t meant to be.”
“No,” she said, “It’s better that you didn’t finish it because now you can change the ending.”

And the truth of her words struck me. The story, my story was not finished. It didn’t have to end because Robert was gone. It was up to me change the ending for the book, and really my life.

So, Minli’s journey is a search to change her fortune and to find happiness just as mine was as I was writing. Minli is not perfect, but she tries her best and at every point she learns and grows until finally she realizes that happiness is not a prize that can be bought or won. Happiness is a gift that is cherished, something that one is truly grateful for. Just as I am to all of you, today.

Thank you very much. 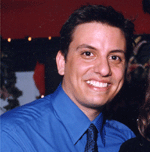 Oh Grace! I can see why everyone was in tears.

btw I am re-reading WTMMTM and it is just as beautiful as it was the last time I read it. (RE-reading is the real test of a book I think!)

That was beautiful, Grace.

Grace, your name fits you. I'm in quiet awe of the work you did to come through the dark and into the shimmer.

Oh great. I was sitting in my office with a frozen mocha drink and I see your post. I'm thinking, la la la . . . very cool, this should be fun. And then I read it and start crying.

Grace, congratulations. What a beautiful way to honor Robert.