Beyond the Book: SORTA LIKE A ROCK STAR by Matthew Quick

Beyond the Book: SORTA LIKE A ROCK STAR by Matthew Quick 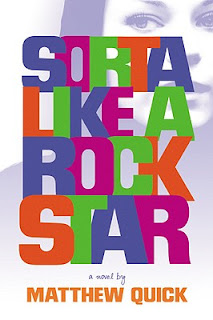 
Amber Appleton lives in a bus. Ever since her mom’s boyfriend kicked them out, Amber, her mom, and her totally loyal dog, Bobby Big Boy (aka Thrice B) have been camped out in the back of Hello Yellow (the school bus her mom drives). But Amber, the self-proclaimed princess of hope and girl of unyielding optimism, refuses to sweat the bad stuff. Instead, she focuses on bettering the lives of her alcoholic mother and her quirky circle of friends: a glass-ceiling-breaking single mother raising a son diagnosed with autism; Father Chee and The Korean Divas for Christ (soul-singing ESL students); a nihilist octogenarian; a video-game-playing gang of outcasts; and a haiku-writing war vet. But then a fatal tragedy threatens Amber’s optimism—and her way of life. Can Amber continue to be the princess of hope?

With his zany cast of characters and a heartwarming, inspiring story, debut YA author Matthew Quick builds a beautifully beaten-up world of laughs, loyalty, and hard-earned hope. This world is Amber’s stage, and Amber is, well…she’s sorta like a rock star.

I've mentioned this on the blog before before: the first time I read the manuscript for this novel, I was on the subway, and I had just reached a very tragic, very emotional part in the story and found myself suddenly with tears streaming down my face, actually sobbing, tears mixing with snot (no, not a pretty picture). And it was at that very unattractive moment that I realized, I must have this book. I couldn't wait to get off the subway and finish reading.

There's more to the story, though. I was on the subway on the way to visit my boyfriend in Brooklyn, and as when I got to my stop, I was completely lost in thought, caught up in the world of Amber Appleton. As I walked down the street I mptoced there were a bunch of people walking towards me, and I moved out of the way. But then I got caught in one of those situations with one guy where we both move in the same direction over and over and end up in an awkward street dance. But I finally dodge to one side and get around the guy, annoyed to be taken out of my reverie, when he reaches over and grabs my arm, scaring the sh*t out of me, and says...

It was my boyfriend. Yes, I was so lost in thought that I didn't even recognize my own boyfriend. Well, he was off to get pizza so I turned around with him apologizing and explaining why I wasn't paying attention, still flustered and emotional from reading the tragic scene, when all of a sudden I hear another male voice say,

This time it was illustrator Christopher Myers walking a dog with a friend. Still flustered, I say hi and try to be normal, but at this point I wonder who else I'm going to run into on the street. And I really just want to go up to the apartment and read the rest of the novel!

Anyway, the latter part of this experience doesn't really have anything to do with the book itself, except that I always remember these encounters when I think of falling in love with the novel.

And so, the book. Oh, the book. The second half of the book lived up to the first half, and the next morning I immediately called the agent to tell him how much I loved it.  My editorial readers all loved it, too--in fact, we were all speaking like Amber Appleton for week's after reading the book. True? True. Sucka!

So, let me confess something to you. Sometimes editors can get jaded. And sometimes we guard ourselves for defeat. It's only natural--you get burned, you get hurt, and so you guard your heart. I had gotten used to having books I loved get turned down by our acquisitions committee, and so I had adopted the "hope for the best, but prepare for the worst" attitude. But this time I decided I was going to go all out, I was going to put my heart on the line. I was not going to take no for an answer.

Well, there isn't much suspense here, because you all know that we published the book, but I will say that I had to fight off some other members who also wanted to marry the book. Then again, publishing is a polygamist business, so it's all good.

I generally pitch Sorta Like a Rock Star as Juno meets Stargirl. Juno because of the sharp, distinct voice (although truth be told, I like Amber's voice better than Juno's), and Stargirl for its uplifting message of optimism and hope.

Why do I love Sorta Like a Rock Star so much? Let me count the ways. I love it for the character and  voice of Amber Appleton, who truly makes the world a better place. I love it for the fantastic cast of characters, from the Korean Divas for Christ, to the haiku-writing Private Jackson. I love it for touching me to the soul. For making me cry my eyes out, and then leaving me rejuvenated and exhilarated at the end.

I think Justina Chen said it best in her blurb:

“Every sentence in SORTA LIKE A ROCK STAR beats with hope and heart. If there ever was a manifesto for living with your heart wide open, for embracing exuberance, for choosing YES and WHY NOT, this book is it.  And Amber Appleton? She is the ambassador of sassy optimism.  This is a must-read, must-quote, must-hug kind of book, the best kind of book there is.” Justina Chen—author of NORTH OF BEAUTIFUL, and NOTHING BUT THE TRUTH (AND A FEW WHITE LIES)

So far it's received a starred review from School Library Journal, and many glowing blog (and podcast!) reviews.


Matthew (aka "Q") and his wife, author Alecia Bessette, have started a beautiful new blog called Quest for Kindness, which ties into the message of Sorta Like a Rock Star perfectly.

Seriously: read this book. You'll be better for it. It is "voice-y," for those of you who have trouble with that, but I urge you to stick with it. You won't regret it. Just make sure you have lots of tissues handy.  True.
Posted by alvinaling at 8:30 AM

I'm not done with Sorta Like a Rock Star, but I am digging it. I can't wait to share with the high school students I teach. Way to go Matt. On a side note, I also loved his first book, The Silver Linings Playbook.

I was glad that I was at home and not on a subway when I started Sorta Like A Rock Star because I couldn't put it down. Amber is such an inspirational character and Quick has brought her to life in such a wonderful way. The cast of characters is touching and highly entertaining.
Thank you Alvina for making sure SLARS was published. One of the best books I've read in a long time.
I also heartily support Quest For Kindness. The essays there are terrific and these days kindness needs to be promoted more than ever.

I love the story of you being so absorbed you didn't even recognize your own boyfriend! THAT is the kind of absorbtion every writer dreams of--though I at least always imagine children in that state.It's cool to know that you -- a jaded editor --got that into a book. YOu really ARE in the right job: I wonder how many editors react that emotionally to mss.???