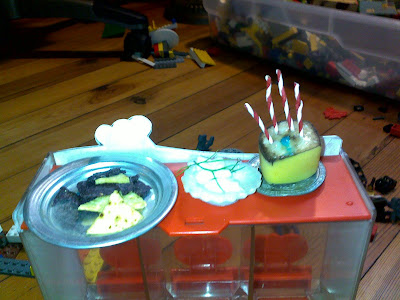 This is doll's food: the sandwiches are broken up chips, the salad is cabbage with the threadlike tops from a bulb of fennel, and the cake is a slice of banana with toothpaste squirted on for frosting. The four-year old brother thought of that one; his sister was I think a little distressed when he straightened out the doll's candy canes for candles.

Maybe you can see it better here: 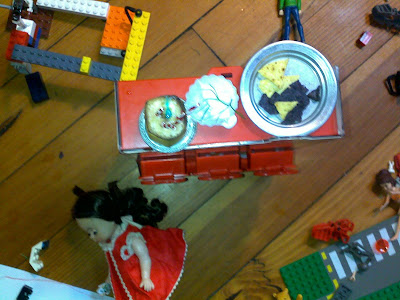 The refreshments were in preparation for the ball - Fiona (one of the children I babysit) had plotted it all out before I arrived. It was not going to be much fun for Cissette (blond below) since her daughter Alice (lying on floor above) was going to eat all the food and do other naughty things. Before the ball, Alice was well-behaved, because she wanted a new dress. We made Cissette's outfit first: Fiona designed it and I spent most of the afternoon sewing it while the dolls talked: 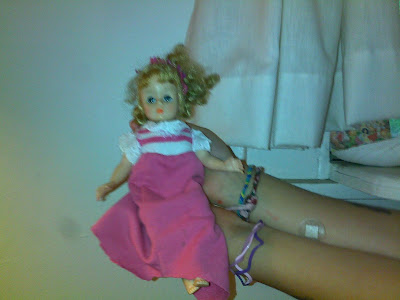 Fiona loved it and I have to admit, I was rather proud of it, too. It even has two buttons on the back.

There is something about these afternoons that's inspiring. Fiona and Ethan are both really creative, and just hearing what they say and getting in touch with that side of myself is really fun. And I think (do you agree?) that having ANY kind of fun is inspiring. It puts you in a playful state of mind, and when I've really had fun, I'm willing to work/write. When ALL I do is work/write, I don't want to do it. But sometimes the inspiration is more specific: when I told them an incident from my new novel, Fiona smiled and said,
"That sounds like something Alice would do."
Posted by Libby Koponen at 9:16 AM

I just loved this little story, Libby. Isn't it neat that simplest things children say can set off your imagination? That tiny party looks like so much fun!

When I was teaching elementary school, my students wrote quite a bit of poetry. Sometimes their writing got me revved up to write myself. In fact, I was inspired to write two of my unpublished poetry collections after reading the wonderful fairy tale and "things to do" list poems my students had written in my classroom.

That is gorgeous. I love the banana with toothpaste icing!