It's All About LOVE! 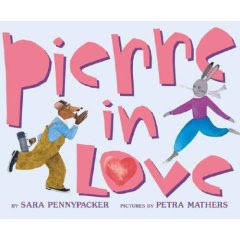 PIERRE IN LOVE is a perfect book to read on Valentine’s Day because it’s all about L-O-V-E!

Pierre, the main character, is secretly in love with Catherine. He can think of nothing else. He can’t eat. His face melts “into a loopy smile” every time he hears her name. He daydreams of rescuing her from danger. He yearns to express his love for her.

Catherine, the object of his amorous feelings, is a ballet teacher. She is “exquisite, an angel of grace and beauty.” Pierre doesn’t have the courage to tell his beloved how he feels. He thinks he is not good enough for her because he is just an ordinary fisherman.

Pierre gathers treasures he finds when he is out at sea: a beautiful unbroken shell; a bouquet of wild roses from a small island; a piece of driftwood; a heart-shaped wreath of sea grass; and even a gourmet treat—a dozen fresh oysters. He plans to present them as tokens of his affection to the elegant lady of his heart.

But each time he brings one of the presents to Catherine, he chickens out and leaves it on her doorstep. Catherine is touched…and intrigued. Who could be leaving her these treasures from the sea? When she can stand the suspense no longer, she decides to hide in her lilac bushes one night to find out the identity of the mysterious gift giver. When Catherine leaps “gracefully from a bush," she surprises Pierre.

An excerpt from the book:
Pierre was so stunned he could only stare, his mouth hanging open like a haddock’s. This close to Catherine, he felt all bloopy and love-swoggled. (Don’t you just love that language?)

Pierre finally summons the courage to tell Catherine he loves her. And just when you’re expecting the I-love-you-too-Pierre-happily-ever-after-smoochy-ending, she informs him that as much as she appreciates his gifts she cannot return his feelings. Her heart belongs to someone else! YEOUCH! As hard as the news hits our love-struck protagonist, he tells Catherine he is glad that she is happy.

Well, tie me down and lash me with a bunch of wet tagliatelle noodles if Catherine doesn’t declare that she is lovesick over this fellow. She says she can’t bring herself to tell him because “he’s an adventurer, bold and brave, and I’m only an ordinary ballet teacher.” All she has been able to do is paint pictures of her secret love, night after night.

Even though Pierre is crushed and heartbroken, he sleeps well that night. He feels better the next morning and is able to eat. He realizes that keeping hold of his secret was what had made him feel so miserable. On his way to the dock that morning, he stops by Catherine’s studio with one more gift: some advice. He encourages her to tell her secret love about her feelings for him: “Feelings are like tides—you can’t hold them back!”


It soon comes to pass that readers—and Catherine—find out the identity of the bold adventurer hero that she has only admired from a distance. Yep…it’s Pierre. And so…we actually do have a happy fairy tale ending--just a little later than expected.

To be sure, PIERRE IN LOVE is a sweet story. Here are some of the things I like most about the book: Sara Pennypacker’s use of vocabulary and language, the gentle humor, the two likable lovesick characters, and the art of Petra Mathers. Mathers captures the atmosphere of the setting and the tone of the story with her illustrations. I especially like her two-page spread of Pierre in his boat chugging back into his small seacoast village. Though her folk-art style illustrations are uncluttered, some contain interesting little details—a copy of Moby Dick on Pierre’s night table and a poster of “Some Bony Fishes” on his bedroom wall.

PIERRE IN LOVE is a fine book to read aloud—especially on Valentine’s Day!

Will U B mine 2-morrow?
Posted by Elaine Magliaro at 6:40 PM