My life is dominated by children's books, it being my job and all, but last week was even more so because of the SCBWI Annual winter conference here in New York. I was on the faculty for the Writer's Intensive Workshop on Friday, and my day started with breakfast at 8:15 am at the Hilton with 24 of my colleagues. It was great catching up with old friends, some of whom I haven't seen in a long time, others who I see quite often, and meeting for the first time several editors I only knew by name and reputation.

I facilitated two sessions of critiques, one in the morning, one in the afternoon. Each editor and agent was assigned a table of eight or nine writers. Each writer would have 12 minutes to read a 500-word excerpt and get critiqued by me and the other writers. I had the person to the left read for the person to their right, so as to have someone unfamiliar with the work read it aloud, and for the most part, everyone was an excellent reader, and it helped us identify passages and words that perhaps weren't working. Part of me really likes these impromptu critiques, as they require no preparation, but part of me is terrified of them. It takes a lot of concentration, and at times, through no fault of the writing itself, I would find myself drifting and have to bring myself back so that I could comment intelligently. I also always worry if the writers won't respect my comments, if I'll say something stupid. But overall, I felt that everyone had helpful and constructive things to say, and it was nice to be able to take the focus off myself by having everyone else comment as well. I thought the writers at both of my sessions were professional and kind, and the time flew by, and I hope everyone found the sessions helpful.

The day also included a morning panel on "How to Receive and Evaluate Criticism," and then ended with a panel on Revision (two of my fellow book group members, Tara Weikum and Julie Strauss-Gabel, were panelists), and then a surprise keynote by Newbery-Award winner Linda Sue Park--she gave a warm and touching speech.

At 6 pm the VIP cocktail party began. I had attended for the first time last year, and was amazed at just how many people there I knew, and this year was no different. Fellow editors, agents, authors including three I'm working with (Gary Golio, Ellen Yeomans, and Wendy Mass), familiar faces from Kindling Words, and was surprised to run into my buddy Jarrett Krosoczka and his fiance--I hadn't known they would be attending. It was after 7:30 before I knew it, and I headed over to Bar 9 for Fuse#8's Kidlit Drink Night. I was a tiny bit apprehensive because I had recommended the bar, and hoped people liked it, but everyone seemed to have a great time, and thank goodness Fuse reserved the back room, because it was a great turnout, so crowded. Most of the usual crowd was in attendance, including all but one Longstocking. As usual, Meghan and I were there to represent the Blue Rose Girls. I met bloggers MotherReader and Oz and Ends. More familiar faces from Kindling Words were there, as well as some old SCBWI friends. Agent Barry Goldblatt was there with a client or two (incidentally, my very first solo agent lunch was with Barry), a good Class of 2K7 contigency was in attendance, and Linda Sue Park made a late appearance, as did Caldecott-Medal winner David Diaz. A hardcore group of Kidlit drinkers stayed past midnight. I'd call it a smashing success. And yes, I did eat tater tots. I did remember to take some pictures, although not as many as I had planned on taking. One of the 2K7ers was taking pics, so I'm sure more will surface. But as promised, here's a sampling: 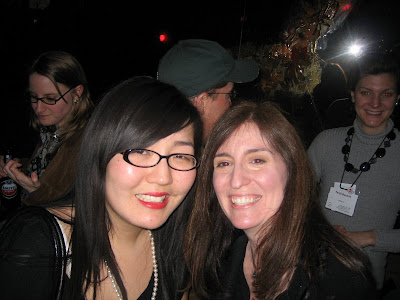 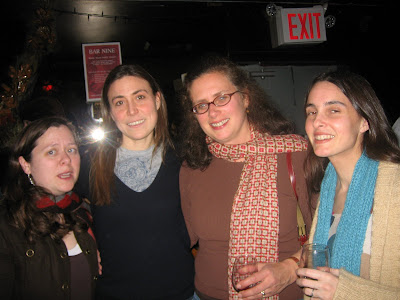 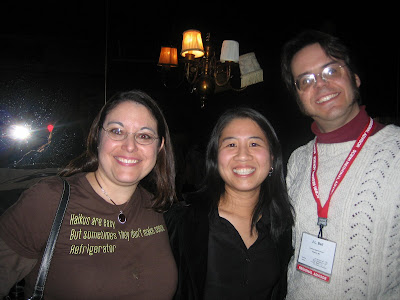 MotherReader, me, Oz and Ends 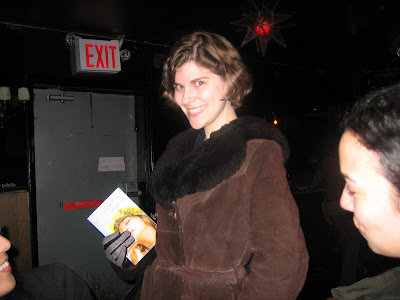 That 2k7er is the delightful Carrie Jones. It was nice to see you!
Kim Marcus

Thanks for the pics. What fun! Wish I could have joined y'all. Next time?

Every next thing I hear makes me more jealous.

This sounds so amazingly wonderful to me. In my dreams I am there too.

What I would have given to be there too. But for Kidlit Drink Night I did send some friends all the way from Arizona!

Thanks for the summary and the pictures Alvina,
gail

Thanks for the photo on your page. It's like I'm an important person. Very cool.

It was wonderful to meet you, Alvina. I really appreciated that you introduced me to some authors, illustrators, and editors (oh my!). I'm not a shy person, but sometimes it's hard to make that first step. Especially, when its along the lines of "Hi! Who are you?". You were a great hostess and it was a fantastic party. So glad I made the journey north to be there.