"Research
I’m deep into my research for book number one million and four. It’s actually for book number 8, I believe, but it may as well be that first number. I’m exhausted! Doing nonfiction is really odd. I always end up finding out more than I want to know. For example, did you know that astronauts put on diapers before trying on the space suit? Yup. That’s because it takes so long to put on/take off. Then there’s the fact that in space they drink their own pee… or rather filtered pee turned into water. Then there’s the good ol’ camera at the bottom of the toilet to help the ‘nauts aim so that the undesirables don’t float off. That’s what I’m going to call the astronauts from now on—the ‘nauts. Oh boy, I’m losing my mind again. This is happening quicker than it should!"

Anyhow, I'm weary to divulge a new idea to you all because I don't want anyone stealing it!... but then again, who would?

Ever heard of Topsy the Elephant? No? Yes? Well, it's a sad story. Thomas Edison, worshiped by many, electrocuted the circus animal. What's equally bad is that he filmed it, which you can see if you put it into YouTube. What's also bad is that he electrocuted many animals--puppies, cats, and horses... He also introduced the new form of the death penalty--electrocutions are better than hangings, aren't they?

Yes, dear readers, Edison had a dark side. Topsy's life story is also sad. I won't bother explaining it all because I want to make it into a book!

A book? you ask. For children? Huh?

Well, this would be a graphic novel (a different sort with maybe one or two images per page and lacking the speech bubbles) and it would either be for teens or adults.

Perhaps I'm crazy but I find this story to be fascinating. It needs to get out there! So, if any editors are reading this and don't think I’m completely nuts, send me an email! I want to sell this idea. 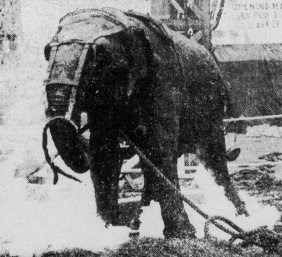 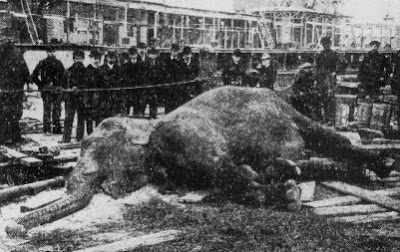 You know, I find this stuff fascinating as well, in a morbid ire-making way. I remember as a youngster learning about Audobon, who's revered around here, it shocked the crapola out of me to find out what a ne-er do well and his methods of "preserving" and recording those birds were to KILL them and pose them. Sometimes it would take multiple specimens and some were endangered. So I find it ironic he's noted as a conservationist.

Another thought, Austronauts using a diaper (and what a timely post!), kids find that stuff fascinating, for sure. Younger kids want to know where fish poop and pee, so both are fascinating subjects! With your spin on it, you're building a very interesting niche in the publishing world indeed!