Once I wrote what was supposed to be a picture book on LIGHT AND COLOR. Until its research, I’d always vaguely assumed that objects just “are” certain colors. You know: Lemons are yellow. Period.

I learned that what we see as color is really reflected light. When something is, say, bright yellow, it absorbs all the colors of the spectrum except bright yellow. The lemon reflects yellow light waves and our eyes translate them into colors, the way our ears translate radio waves into sound.

Even more fascinating (to me) was learning that light is both matter and energy, and each color, or part of the spectrum, travels in the same straight line, but vibrates (or wriggles as I said in the ms.) at a different frequency and has a different amount of energy. Blue has the most energy, red the least.

Yellow is right in the middle,

which is probably why in the I Ching yellow is always talked about as “the mean,” (in the sense of middle)….and the Greeks talked about the “golden mean.” Right now I want sunlight, energy, and the color yellow itself everywhere around me – and this is what I’ve got. Maybe I need to be less extreme, maybe I just like the color, no psychology or science or philosophy involved, maybe I was just starved of sun in my old place – but bright yellow is what I’ve painted my living room: 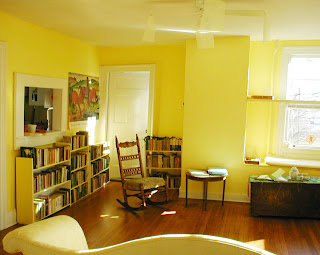 That’s how it looks in the late morning sun (well, it's actually a lot yellower than it looks on my screen). When the sun rises, it glows like a box of fire….and even when there is no sun and very little light at all, it still looks yellow. In most lights, it's not quite the tone I’d imagined,and I’m hoping that when the BRG come visit they can help me pick the color for my other room – color is tricky!

Writing about this makes me want to go back to that ms. – the editor (not Alvina) liked my outline, but I got so involved in the research that the ms. became at least ten times too long, blathering on about photons and atoms and the kinds of colors we can’t see, like ultraviolet (which bees can see but can’t). As the poor editor said,
“My head was spinning!”

I’d been spoiled by Alvina editing things for me; but if I go back to Light and Color, I’ll have to learn to do it myself – at least for the first pass! What do you think? Is this ms. worth working on or should I stick to novels? I was going to put up a sample page but chickened out. Instead here is another picture (Meghan and Linda-- Aliens and Magic Hoofbeats are on this shelf too but they don’t show as well as the others because they are lying down. Molly Bang isn’t a BRG but I like her so My Light is there too. She had the same trouble with text and put all the stuff she had to delete on her Website!) 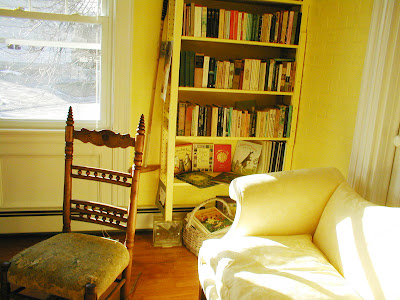 ...and can you include the part about the bees?

Write it, Libby. You're obviously intrigued by it, so you should write about it.

Here's my interpretation of color and energy:

Blue has the most energy, so it's an energy-sucker, thereby leaving less energy for others around it. Blue is a calming color.

Red has the least energy, so it takes little for itself and leaves the energy out there for others to absorb. Red is a stimulating color.

Thank you both. That's encouraging and I can tell by how much I like the answer that it's what I want to do -- though I will finish this novel first. And Kathryn, thanks for saying to include the part about the bees-- I will. I even have photographs of what they see (translated into colors we can see).

I always finish things faster when I know what's next!

Fascinating about why blue is calming and red is energizing.....I know, I know, it's not scientific (or who knows, maybe it is and if we knew more about physics we could prove it!) but it's interesting and it makes sense to me.

I hope I can write the book so kids will find it interesting and come up with ideas like that as they read it.

Anyway, thank you both.

Your new apartment looks so inviting!

It's perfect, Libby. I bet it feels warm even today. Congratulations on the new digs.

As the wind howls ouside my house on this frosty February evening, the pictures of your sunny yellow apartment look mighty warm and inviting.